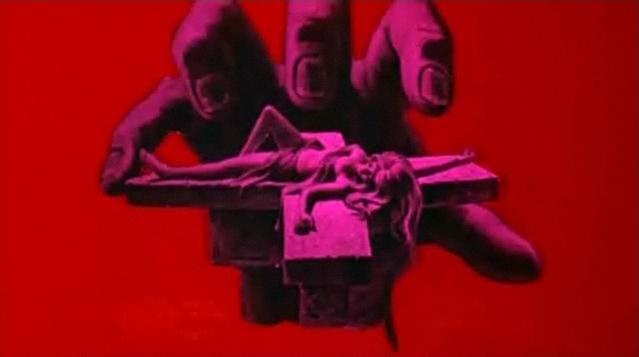 Ask most horror fans who their favorite horror author is and I'd be willing to bet that most of them would respond by saying HP Lovecraft. Lovecraft was one of those writers with such a unique, singular vision that he created a whole new type of horror that is really unique to our contemporary times. The world created by Lovecraft was bleak, dark, mysterious and ultimately, once the protagonists would piece everything together, maddening and filled with insurmountable evil. Given just how influential and loved his work is, film-makers have been trying in vein to translate his works to film for decades. Unfortunately most of these attempts have fallen in the range of "abject failure" to "okay, but horribly flawed". Strangely enough, 1970's "The Dunwich Horror" is not only one of the earliest attempts at bringing the world of Lovecraft to life on screen, but is also one of the most successful.

"The Dunwich Horror" is an updated retelling of the Lovecraft story of the same name. Both follow the story of the Whateley family, an unusual family that lives on the outskirts of the town of Dunwich that practice strange black magic and worship the occult. The antagonist of the film, Wilbur, lives with his grandfather in the family estate that he inherited when Wilbur's great-grandfather was lynched and burned at the stake by the town's inhabitants. Wilbur's birth happened under strange circumstances that forever scarred his mother, leading to her being permanently held in asylum in nearby Arkham. There are other strange questions that hang over Wilbur's birth, such as who his father was and what became of his twin brother, who was claimed to have died during the birthing process, though no confirmation of the death was ever provided.

The story starts off with Wilbur making a trip to Miskatonic University in Arkham, to read through a mysterious ancient text known as the Necronomicon. While in town, Wilbur meets Dr. Henry Armitage, a professor who knew Wilbur's great-grandfather, and one of his students, Nancy. While Dr. Armitage does not allow Wilbur access to the book, Wilbur doesn't leave town empty-handed, having seduced Nancy back to his estate in the countryside for the weekend. When arriving, it becomes clear that Wilbur has some questionable ideas in mind for Nancy, a fact which becomes much clearer when Armitage comes to the estate to return home with Nancy and is set back.

While most of the plot points from the novella remain, there are some important changes. Both stories revolve around the character of Wilbur Whateley, though the film drops all of the unusual aspects of his backstory. While in the novella he is portrayed as a mutant, having grown up extremely quickly with many deformities, he is portrayed in the film more in the vein of the classic vampire, being a charming seducer with amazing persuasion skills. One of the most surprising twists in the novella, which I won't spoil but will say involves some dogs for those of you familiar with the story, doesn't occur here. As a result, the final act of the film varies wildly from the novella, though doesn't stray in theme or tone.

These changes are what allows this film to succeed separately from the novella. While most Lovecraft adaptations are near verbatim copies of the source material, this film succeeds by dropping the elements of the story that wouldn't translate and creating new characters and story arcs to fill the gaps. While the novella is mostly backstory of the character of Wilbur, the new storyline between Wilbur and Nancy expounds upon Wilbur's backstory, fleshing the character out, while still driving the film forward and telling an engrossing story. While the plot point that I mentioned was omitted from the film, it would have led to a very unsatisfactory ending to a film and the new ending maintains the same tone and overall feel of the original, while being more friendly to the structure of the film's narrative.

That's not to say that everything that wouldn't work on film was struck or modified in the final product or that everything vital was included. There are some strange, minor plot points that find their way into the film which just don't stand on their own without knowledge of the novella. If you're not familiar with the original, I can guarantee that you'll be scratching your head when the plot point about birds stealing souls show up. As it was, I was pretty confused until I remembered a throwaway sentence in the story which explains what's happening. It was kind of odd. On the other hand, the origin story here is so streamlined that you miss most of the really cool, unsettling details about Wilbur's father. It's a real shame as the information about Wilbur's birth is some of the coolest, creepiest stuff Lovecraft's put to ink. It's a real missed opportunity, though it admittedly would have been a totally different film if it was included.

Stylistically, this film really succeeds in embracing that classic B-movie feel. There's tons of super brightly colored sets, props that look like they're out of a Flash Gordon short and plenty of theremin heavy soundtrack to set the mood. It almost reminded me of "Suspiria", though not nearly that intense or pervasive. Still, it gives the film a unique feel that is sadly missing in contemporary film.

Strangely, "The Dunwich Horror" succeeds as a Lovecraft adaptation by having the courage to stray from the source material and to make the story it's own. While Lovecraft is certainly a visionary author, his horror is so cerebral that director's often have trouble translating it to film. Given the immense amount of respect for his work, most film-makers feel as if they are slaves to the original story and end up making films without an audience. They cannot live up to the original story, which alienates the hardcore Lovecraft audience, while at the same time, they stick so closely to the source material that casual audiences are left confused by the vast amount of backstory required to understand the plot. "The Dunwich Horror" provides the blueprint to make a successful Lovecraft adaptation, cut the fat and retool the story in a way that still provides the needed backstory, while at the same time providing an engaging story to keep the action going forward. Now if only other film-makers can start following this recipe and maybe we can start seeing Lovecraft films that are as good as the stories they are inspired by.