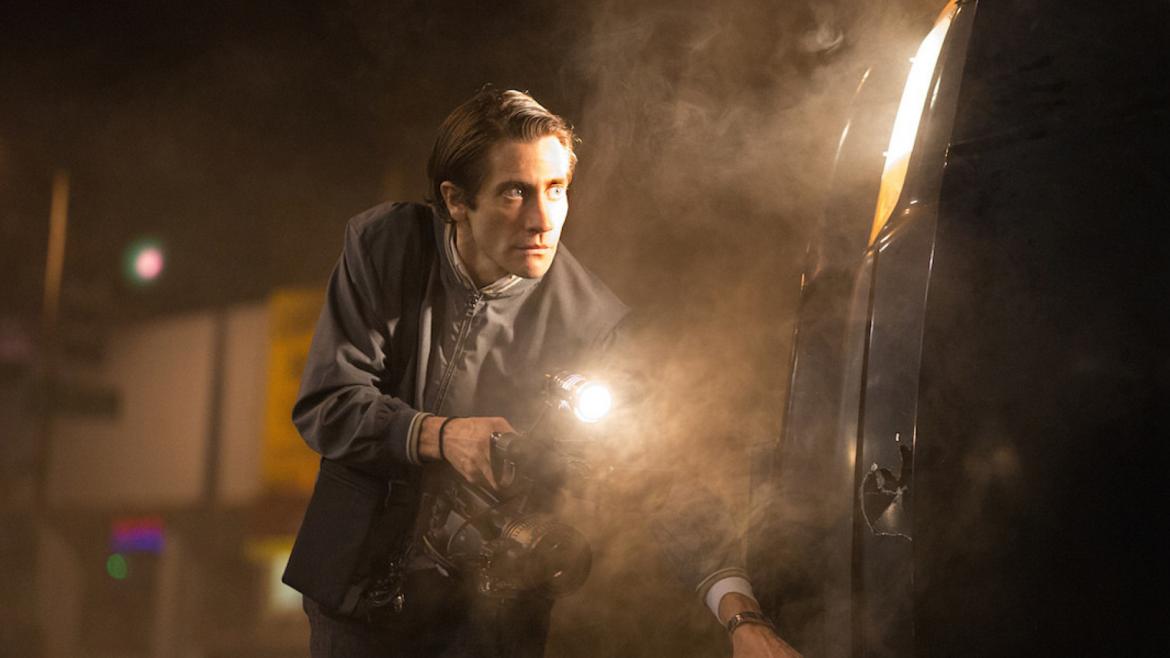 At its core, Nightcrawler is a film that illustrates the ideal of the "self-made man." Our culture is one that always loved stories of people picking themselves up by their bootstraps and making something of their life. And that's really all that Lou Bloom, played by Jake Gyllenhal, wants to do.

What director, Dan Gilroy, does is to take this story of an American ideal to its extremes. Not long after the movie opens, Lou stops at the scene of a traffic accident and watches as police officers work frantically to pull a woman from the flaming wreck. As he stands there, two men pull up in a van and run in with cameras to try and get some footage they can sell to the local news. Watching Lou watch them, you can almost see the light bulb. He has found a job he can create for himself. The lengths to which he proves he is willing to go to build his empire and make a name for himself become more and more terrifying as the story plays out. Gilroy has taken the basic layout of a "crooked cop" story and teased it out so we can follow this arc in a wholly new way. We still have a film that spends much of its time on two men driving around together, listening to a police scanner, and doing dastardly things, only now that we've take the cops from the scenario we are able to appreciate the story in a different light.

This movie is a technically stunning endeavor. Gyllenhal moves so effortlessly within the character that you almost feel sleazy watching him. His character is not only unsettling, but deeply unlikeable in every aspect and he plays it in a way that gives you all of that without feeling overwrought. Cinematographer Robert Elswit has some impressive credits to his name and it shows. The camera work is beautiful, in action scenes that are shot to amplify the suspense and action, as well as in shots of Los Angeles that serve to paint a portrait of a city divided, as the local news people intone over and over that they want stories of "urban crime, creeping into the suburbs". Violence and fear are what sell on the news, and the film takes a very clear stance against this phenomenon. My one complaint would be that the score, at times, was very distracting. There are scenes where the music takes on a swelling, sometimes uplifting sound and this seems mismatched with what is happening on screen. This could very well be an intentional choice, on the part of the director and music supervisor, James Newton Howard, to highlight how sick it is that we laud people who behave in these ways and believe these things, but I felt the movie does enough of that on its own. The soundtrack of the movie should not be something that is overpowering and distracting, and it does feel that way at times.

Overall, this film fits much more comfortably into the thriller genre than an out-and-out horror film, but Gyllenhal brings enough creep to it that you'll certainly walk away satisfied. Nightcrawler opens nationwide on Halloween, so check it out!