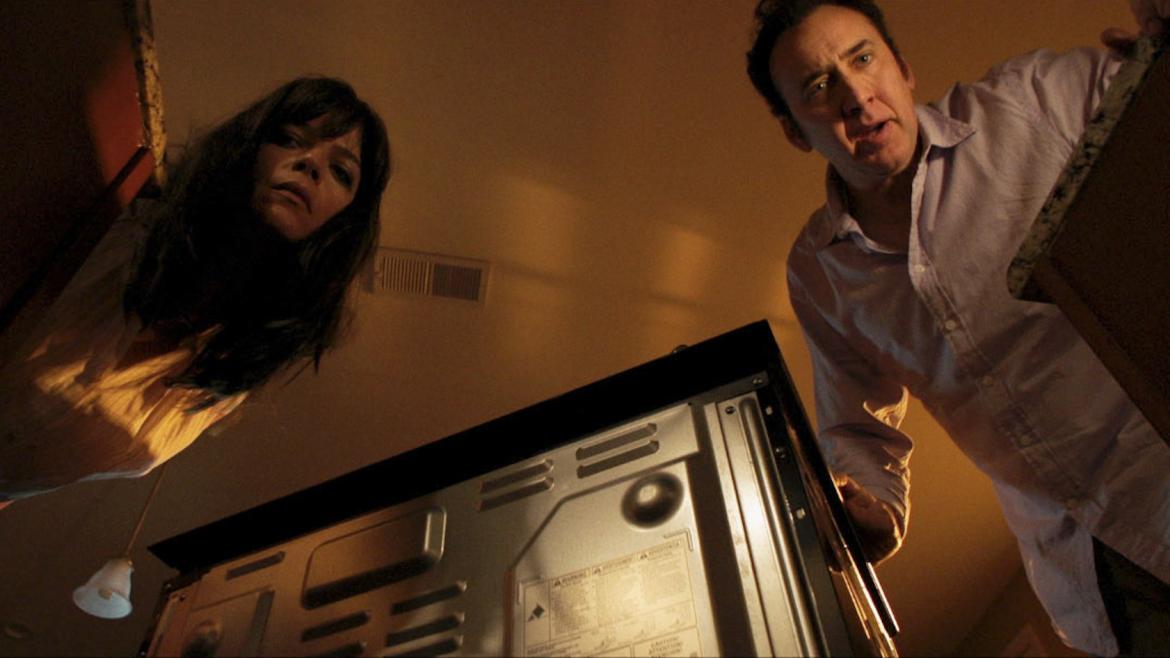 “The thing about Nicolas Cage movies is… unless you’re a total cynical dick, you have to embrace the fact that Nicolas Cage is a pretty good actor. He’s done a lot of weird, dumb movies, but that was supposed to be the point of the episode — that Nicolas Cage is a metaphor for God, or for society, or for the self, or something. It’s like — what is Nicolas Cage? What is he? Is he an idiot? Or a genius? Can you write him off, or is he inexplicably bound to your soul?” -Dan Harmon (on the unrealized Nic Cage episode of Community)

I remember the first time I saw the trailer for Brian Taylor’s Mom and Dad. It pinged into my text inbox, sent by a friend who sends me an unending stream of silly Nic Cage memes and gifs. We all have that friend, right? I watched the trailer with the same skepticism that I approach most new properties starring Cage. And the trailer looked pretty awesome. The man who brought us such stellar performances as Caster Troy and Sean Archer in Face/Off and Seth in City of Angels has made some interesting choices in the past decade, but we haven’t really seen him do a true horror movie.

Mom and Dad centers on a “typical” American family. Living in a nondescript suburban setting, the Ryans appear to have it all. Brent and Kendall (played by Cage and Selma Blair, respectively) have two beautiful children and a lovely home. Brent works hard and Kendall spends her days bopping from gym to juice bar. Everything appears to be fine, until a strange phenomenon turns all parents into monsters hell-bent on murdering their own offspring.

Based solely on its casting and premise I was pumped for this movie. I was not alone! When the trailer started making its rounds a few months after my Nic Cage news friend passed it along, people started getting excited. When I had the chance to catch this flick at the Kansas City Panic Film Festival, I showed up early to see if will call tickets would be available. I sat in a packed theater with my popcorn and beer and settled in for a great time.

To my disappointment Mom and Dad suffers from having a spoil of riches and not knowing quite how to use them. The movie feels like it is calibrated just a hair in the wrong direction as it oscillates between embracing its B movie absurdity and trying to make deep points about parenting and society, creating an uneven and confusing vibe that makes it hard to be carried away with the movie. Each of the film’s key elements seems to be turned up or down to high or low, resulting in a movie that feels like all of its moving parts fit into different movies.

Let’s start with Nic Cage. A performance that should be joyful and silly plays more cynical and sad. His character ends up playing like the director saw that now-famous montage of Cage freaking out on YouTube and tried intentionally to create moments worthy of such a video. The problem is that the Nic Cage we all love is the one who swings for the fences and makes choices that don’t always make sense. Every moment of his screen time comes across as so calculated it doesn’t even feel like he is having fun. And where they use Nic Cage too much, they don’t use Selma Blair nearly enough. She ends up playing second-fiddle to Cage when some of the film’s funniest moments are between Blair and Ann Winters, who plays the teenage daughter Carly.

The starkest misfire is in the pacing between action sequences. I thought that just about every action sequence, no matter how small, was a delight. The problem is that these scenes are offset by long droughts of plot exposition and heavy-handed explanations just so we all understand what this movie is really about.

The core of the movie centers on the idea that our societal norms and dreams are really not that satisfying and that growing up is not what you expect. In a flashback sequence that plays a little too on the nose, Brent and Kendall sit in their basement and talk about how they thought their life would have turned out and how it has. They have the life they always thought they wanted, and neither of them is really happy. That was the moment that it hit me. That was how the movie was making me feel. I had spent over an hour in a theater watching what I thought I wanted, and feeling more and more disappointed every moment. I had been sold a lie. Now tell me where to aim my reciprocal saw.