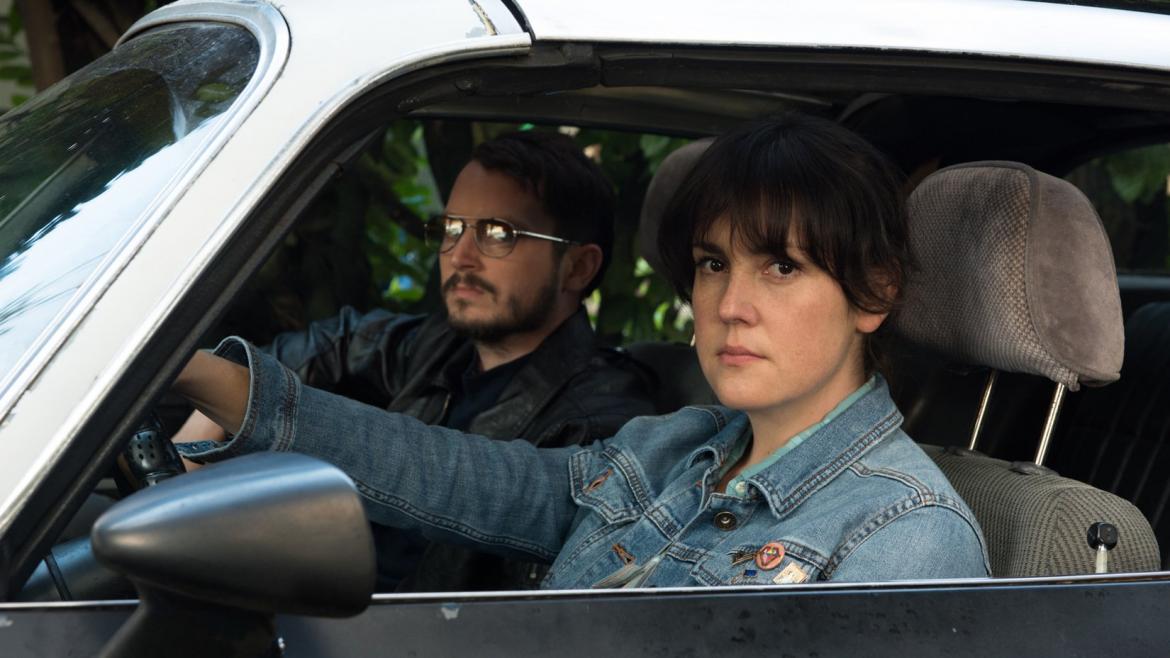 I Don't Feel at Home in This World Anymore (Movie Review)

A comedic thriller might be the best way to describe Macon Blair's directorial debut. Blair is the talented actor that's flown largely under the radar but some will know from his starring role in Jeremy Saulnier's Blue Ruin as well as roles in Saulnier's two other flicks Murder Party and Green Room. With I Don't Feel at Home in This World Anymore Blair shows us that he absorbed a thing or two from his filmmaking counterpart. Except for the "less is more" concept when naming your film--which might just be one more thing to love about Blair's charming, unusual and clever sensibilities.

Call it slow if it pleases you as the film does take its sweet time revealing its darker and more genre friendly moments. Relying heavily on Ruth (brilliantly portrayed by the lovely Melanie Lynskey) and her persistence in having an awkward confrontation with the hooligan(s) who broke into her home and in doing so, violated further her already bleak outlook on the world. The slow crescendo into the film's bloody finale is littered with an impressive amount of dark humor that more than makes up for its lack of action for the first two acts.

Ruth does not embark on her road of newly found boldness alone. She starts off by having a poop related confrontation with her loner neighbor, Tony (Elijah Wood), who happens to have a love of martial arts. The two navigate the lowest rung of the criminal underworld along the way as the audience takes in some universal truths in the process. Somewhere just after midway, but before the last act Ruth and Tony wind up face to face with just one of many despicable human beings and the film perfectly drops (from Ruth's mouth) what might be everyone's collective want in this world--for people to not be assholes. Even in 2017 it's almost shocking for something so simple and emotionally honest to finally be out there in the open cinematically. The look Ruth is greeted with just as perfectly sums up the attitude of the anyone likely to be described by that less than complimentary sentiment.

Macon Blair shows a tremendous amount of confidence from beginning to end and his script is brilliantly simple, yet perfectly articulated. The characters--even the small players--are painted vividly without over explaining or over simplifying their motivations. Audiences can experience the all too real frustrations of life through Blair's direction, but with a detached sense of humor that culminates in a barrage of grounded violence that shows the actor/director's influence by Saulnier.

The performances are understated in the most appropriate ways--often highlighting some bizarre character quirks. Lynskey stomps around with a pitch perfect disapproving march whenever she's been snubbed by her peers as well as the police who seem disinterested in her personal misfortune--which leads to another astute monologue about the struggles of people in our society and how little we perceive/care about those struggles if it doesn't fit our own agendas. Wood struts around with just the right amount of fake confidence and deadpan delivery and comedic timing up to and including his inability to grill the perfect hamburger--but what a shot he is with a ninja star.

Kicking off with what might be the best (and dark) last words of a dying person of all time and tipping its cap with a sprawling sequence of graphic violence, I Don't Feel at Home in This World Anymore is a fantastic introduction to Macon Blair's voice as a filmmaker. The film serves as a perfect compliment to Jeremy Saulnier's brand of "ordinary people in over their heads" and offers a little something of its own. Netflix adds to its growing list of quality original offerings with an honest, hilarious and thrilling little quirky thriller that we should be added to your queue pronto.

Movies Like I Don't Feel at Home in This World Anymore