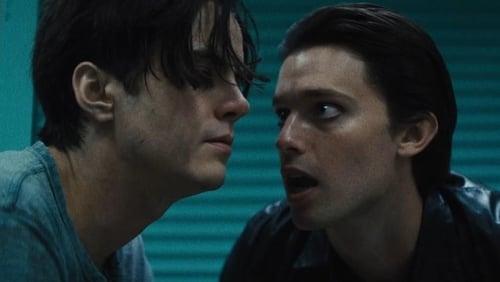 Kids toil in the imaginary friend pool at one point or another whether it be out of boredom or necessity. Adam Egypt Mortimer's sophomore feature Daniel Isn't Real approaches the behavior from the perspective of trauma and underlying mental illness. A logical approach that plays out in clever ways with a hefty dose of fantastical imagery and thick ambiguity.

Mortimer asserts his voice early in the film by demanding the audience’s attention as a mass shooting breaks out in a peaceful coffee shop. A young Luke (played in this sequence by Griffin Robert Faulkner) stumbles across the bloody aftermath. There he finds a new friend, Daniel (Nathan Chandler Reid). The two quickly become besties, distracting Luke from his tumultuous home life. One day Daniel urges Luke to commit a prank that goes too far and Luke's mom convinces him to lock his imaginary friend away symbolically in a dollhouse.

Years later, Luke (now played by Miles Robbins) is a semi-awkward college kid still dealing with his mother's degrading mental health, but when she suffers a violent episode, Luke resurrects Daniel (now played by Patrick Schwarzenegger). With Daniel's encouragement Luke’s confidence grows and he begins to thrive socially. Then, just as in their youth, Daniel’s influence begins to take over as Luke's behavior becomes erratic and dangerous. He cannot seem to shake Daniel's presence. At war with his own psyche, Luke grapples with his potential inherited mental illness and Daniel’s sinister intentions.

Mortimer’s film thrives when it explores the duality of it’s intimate and cosmic implication. We come to understand Luke as someone doomed by genetics, whose brain is at war with itself. But the film can also be read as a piece of supernatural fiction. This second interpretation opens up the narrative and lends to some of the disturbing fantastical imagery within the final act.

The primary focus for Mortimer is on character. Luke is fearful of his potential to slip into the same psychosis that his mother struggles with. Before Daniel re-appears we see Luke struggling with casual encounters and a non-existent love life. Over the course of the film, it's encouraging to see him grow and find a respite in his social surroundings and adding a love interest into the mix. At first his friendship with Daniel seems harmless and charming enough, though the viewer continues to see a darkness in Daniel which bleeds into the lingering idea that this is part of Luke once again trying to manifest and tear his psyche apart.

The tug-of-war of Daniel's true presence--is he imaginary or is there something more sinister afoot--is a game for the audience to deduct on their own. The methods employed by Mortimer within the script and on the screen provide a vessel to dissect and interpret, but the journey is entirely driven by the characters' experiences. Both Robbins and Schwarzenegger deliver fantastic performances which accentuate and deepen the various elements at play during the final act.

Daniel Isn't Real is a unique spin on the dynamics of mental illness, that ventures ever so slightly into a supernatural fantasy. It only narrowly misses the mark by waiting a tad too long to go for broke which ultimately causes its final act to feel rushed. An impressive sophomore effort for Mortimer and an infectious turn for both Miles Robbins and Patrick Schwarzenegger make this a genre sleeper well worth seeking out.