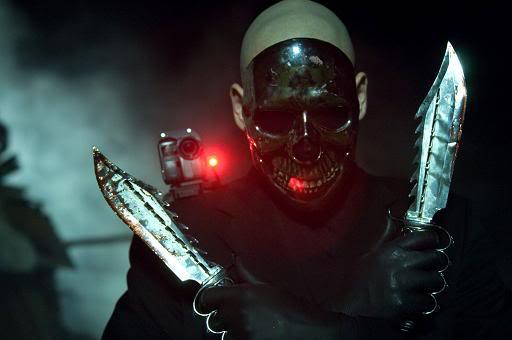 I’ve never seen the original “Laid to Rest”. I mention this fact as it’s the root cause of most of my problems with the sequel, “Chromeskull: Laid to Rest 2”. Unlike a good sequel, which will expand upon the world introduced by the original in a way that gives old fans more of what they love and simultaneously creates new fans, “Chromeskull” takes a decidedly different approach. Instead of making any attempts to introduce new viewers into the “Laid to Rest” world, “Chromeskull” picks up immediately where the original ends and launches into a complicated, intricate story dependent on a pre-existing familiarity with the source material. The end result is a whole lot of confusion.

As I have absolutely no idea what happens in “Laid to Rest”, “Chromeskull” was an exercise in deductive reasoning and logic. Sort of like a puzzle, only with way more nudity and blood, points which I will address later. I can only assume that the two characters we’re introduced to immediately are the final girl and her love interest from the original. There are some brief flashbacks to help explain the puzzling opening scene involving a gas station, a seemingly dead body with it’s face caved in and the two characters I mentioned previously, but the only thing I was able to gather from it was that the dead body belongs to a Jason-esque slasher-killer who may or may not have been killed when his mask was super-glued to his face and he tore it off. Like I said, it’s a puzzle.

This is then followed by the obligatory “kill the star from the first film as they don’t want to star in the turdy sequel” scene, where the final girl is killed off in a hotel room while showering. This scene also introduced me to fact that the killer (who by this point I determined was named Chromeskull from the mask/title!) has some sort of support crew backing him, as one of his cronies kills the previously final girl. It’s an absurdly ridiculous scene, with plenty of pointless, lingering shots of the final girl (I never caught her name, and looking it up would be cheating) naked in the shower, followed up by one of the most ridiculous death scenes I’ve ever seen, where she’s stabbed in the stomach and slowly eviscerated while simultaneously somehow having one of her breasts cut off. Again, I’ll get to the gore later.

From there, the plot just spirals into absolute incomprehensibility. The credit sequence is done over an extremely graphic facial reconstruction surgery being performed on Chromeskull back in his evil lair. Again, none of this is ever explained, so I have no idea who this guy is, why he has a lair and henchmen and why he’s out and about slashing up teens. I also have no idea why he has a handycam strapped to his shoulder like a parrot while he’s doing all that. Side note, this is 2011 man, get a Flip camera or an iTouch or something. You can even wear it in your breast pocket of your suit coat like a pocket square. Image is everything and all that. Besides, you don’t have to worry about this little mini-VHS tape thingies. Seriously, where do you even find those today?

I have no idea why the film-makers made the decision to not make any attempt at all to explain what is occurring to new viewers. I would imagine it’s pretty safe to say that “Laid to Rest” isn’t exactly in the pantheon of classic horror films to where any old person picked off the street would know the ins and outs of the plot. Unlike Jason (guy in a hockey mask and a machete that hates teenagers), Freddy (guy with a burnt face and a razor glove who hates teenagers in their sleep) and Leatherface (guy with a skin mask and chainsaw who hates teenagers in his house), the idea of this Chromeskull guy isn’t straight-forward and obvious. Sure, he has the signature weapon and mask, but I have no idea what his motivation is. Apparently he hates teenagers, so he films himself killing them, though sometimes he kidnaps them and stores them in coffins in his evil lair but he can’t really manage his team of backup killers, so he gets into weird power struggles with them where there’s weird rules and tattoos and pissing contests and ugh, I give up!

This movie just doesn’t make sense. If you’re not familiar with the original “Laid to Rest”, don’t even bother. It’ll give you a headache.

But don’t think this is the only flaw. Oh no, far from it. Pretty much all the screentime is dominated by Chromeskull and his assistant, who wind up feuding and facing off against each other at the end. As a result, everyone else that you’re supposed to feel for (the other victims, the final girl, the police) are all super flat and one-dimensional. The only thing I could find myself thinking whenever someone was killed was “meh” or “who was that again” or, most frequently “Jesus Christ this is intense”.

Yeah, the gore here is ridiculous, bordering on some of the most over the top and violent I’ve ever seen. I’m not the kind of person to get offended by gore (I own a copy of “Cannibal Holocaust” on DVD), but it’s just too much here. The deaths are so absurd and overdone that it borders on self parody. It’s not enough for someone to just get stabbed, oh no, they have to get stabbed in the face and then get their head bifurcated. Or get stabbed in the mouth with an apparatus similar to lawn shears and then have the top 2/3 of their head explode off. Or, the most bothersome to me, get stabbed in the stomach, have their breasts exposed and then subsequently have one of them lopped off. This happens twice. Add in the fact that the “final girl” (I hesitate to even use that term here) is one of the weakest I’ve ever seen and spends nearly the entire film running around in a sports bra and you also have a pretty uncomfortable portrayal of women here. Not so cool.

I’ll admit, “Chromeskull” may be more enjoyable if you’ve seen “Laid to Rest”. Maybe everything makes sense with the added knowledge from the first film. Unfortunately, I don’t have that knowledge. I found myself lost and frankly, just not caring about anything during my viewing. The characters are so bland and uninteresting and the plot so needlessly obtuse and confusing, that’s it’s hard to really care about anything that’s going on. While some fans of the original may like what “Chromeskull” has to offer, there’s absolutely nothing here for new fans to enjoy. Even worse, there’s enough problems that even fans of the original may be turned off. All in all, it’s a pretty awful sequel. Which is probably why a prequel has already been green lit and another sequel is setup at the conclusion. Could this be the next “Saw” series no one’s been waiting for?