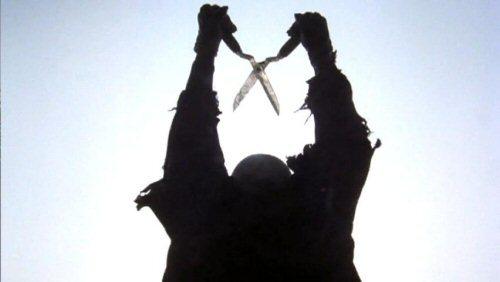 Turns out the answer is a far lesser known cult classic called “The Burning”. “The Burning” is pretty much the platonic ideal of the summer camp slasher movie. The cast is filled with the oversexed teenager trope (including a hilarious appearance by Jason Alexander as the porn and condom supplier), there’s an iconic killer in the hooded, hedge-clippers-wielding Cropsey and it’s loaded with some of Tom Savini’s best gore effects. Coming out merely one year after “Friday the 13th”, “The Burning” took the formula pioneered by the earlier film and perfected it into the model for all summer camp slashers to follow. It’s also arguably one of the best films to fit this mold.

Things open with a quick origin of our killer, Cropsey. Before turning homicidal, Cropsey was merely a drunk caretaker with a temper at a summer camp. One night, some of the camp counselors decide to get even with Cropsey, and prank him with a flaming skull. Rather than getting their desired frightening yet harmless result, they accidentally cause an enormous fire to engulf Cropsey’s cabin, leaving him badly burned and presumed for dead. As you can probably imagine, this isn’t a precautionary after-school special about how playing with fire makes for bad pranks (unless a bag of dog poo is involved, naturally), so Cropsey survives and makes his return as a hideously deformed madman disguised in a black cloak wielding a razor sharp pair of hedge-clippers.

As “The Burning” plays out, it hits upon pretty much every staple of the slasher genre in spectacular fashion. The horny teenagers that compose the cast manage to be ridiculously over the top enough to illicit laughs, yet don’t go so far as to become annoyingly one-dimensional or un-relatable. When they inevitably meet their end at Cropsey’s shears, Tom Savini’s practical effects are there to make you laugh, cringe and groan. In a way, I find it extremely strange that “The Burning” is not as well known as “Friday the 13th” or “Halloween” as it’s influence is just as far-reaching and has moments and images just as iconic.

What sets “The Burning” apart from other slashers is it’s somewhat twisted take on common morality. Whereas slashers typically stick to traditional Christian morals, with the final girl typically being the only one to abstain from sex and most bad deeds almost always going punished, “The Burning” turns all that on it’s head. The main protagonist is introduced being caught while peeping on the girls shower. The other main turns out to, spoiler alert, be one of the original kids at the camp who disfigured Cropsey. Meanwhile, most of the sexually innocent, prototypical final girl characters, get dispatched in a brutal scene occurring on a raft.

Not only does that strange, twisted inversion of morality make some interesting statements about that typical black-and-white moral judgments typically found in films of this genre, but it also adds a significant amount of tension. As viewers have been trained by other slasher flicks to pick out who will and won’t survive based upon these moral queues, it’s next to impossible to really expect what happens throughout “the Burning”. The entire time you watch this, you’ll be expecting certain characters to get killed off because of their actions, which prevents those “well I know this character can’t die now” moments present in other slashers. Meanwhile, there’s kills that come as total surprises, which results in a feeling that anything can happen. It’s smart and surprisingly one aspect of “The Burning” that hasn’t become more ingrained in the horror genre.

While it may slow down a bit towards the very end, “The Burning” is absolutely one of the best slashers ever made, right up there with the classics. Despite being pretty much completely forgotten by mainstream genre fans, it’s filled with classic, could have been iconic moments, and laid the groundwork for what the slasher genre would eventually become. Without “The Burning”, Jason would never have picked up his machete and hockey mask, Freddy would never have donned the glove and “Halloween” might have never brought back Michael Myers. If you’ve never seen this one, hunt down a copy. It’ll remind you why slashers ruled the genre for nearly a decade.