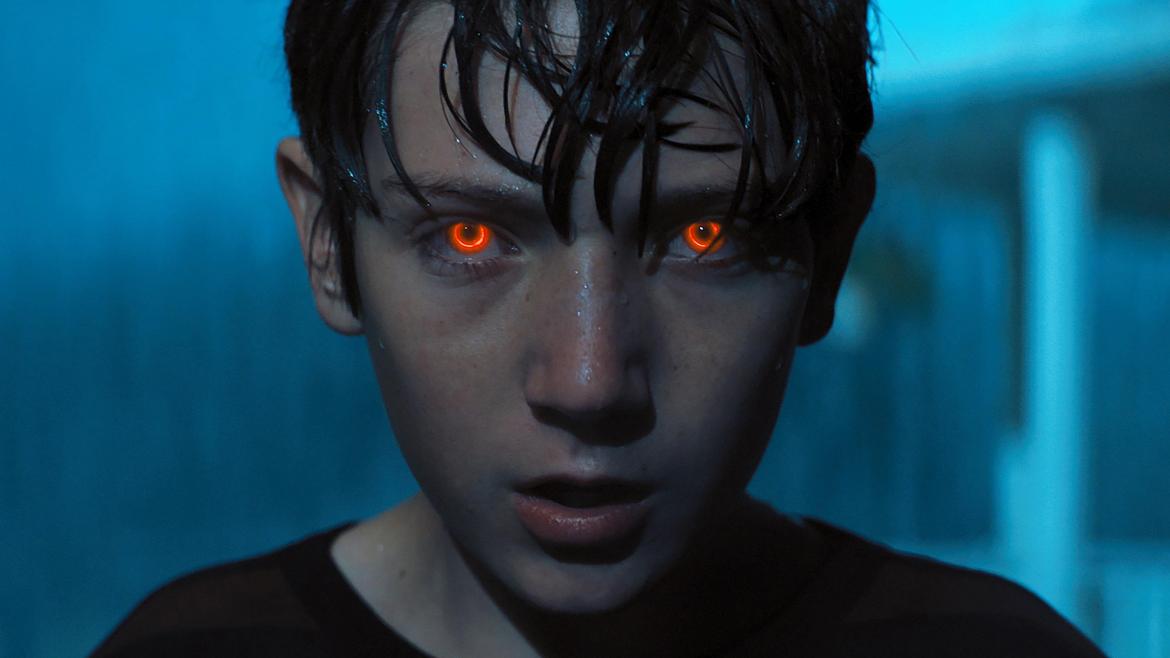 Character is key in just about any horror movie that wants to be taken seriously. How a movie goes about developing them typically varies. Brightburn believes it's telling you all you need to know in its opening minutes. The establishing shots linger on a library of infertility and pregnancy books while two of our leads are in the opening stage of sexy-times before they're interrupted by a loud crash in the woods and a glow emanating from the trees. Cut to home videos of a baby boy and our new parents soaking in every early memory of their new bundle's movements.

10 years later the happy family including Tori (Elizabeth Banks), Kyle (David Denman), and the now 12-year old Brandon (Jackson A. Dunn) Breyer seemingly go about their normal American family life. That is, until Brandon is besieged by strange voices at night along with a force drawing him to the family's barn. Suddenly Brandon begins to notice an inhuman power that's been dormant within him and along with it...a dark impulse to harm those who wrong him or stand in the way of his horrible purpose.

So, this is a movie about parenting? No. Okay, it's a superhero/villain origin? Um, yeah kinda. Really, Brightburn is more or less a slasher where the killer just so happens to be a super powered extra terrestrial. Writers Mark and Brian Gunn do well to keep their ambitions low, by having Brandon not immediately just start torching cities with his laser eyes. The movie does have designs toward a twisted little super serial killer franchise as Brandon dabbles in his dark side while not fully understanding (or at least being in conflict with) his more sinister purpose. However, the script does give him an arrogant superiority complex once he has discovered these incredible powers (with one very specific weakness (seem familiar?). Still, the restraint for a 12-year old to not flaunt his god-like power and recognizing the need to lay low while carrying out his dirty deeds sells the serial killer vibes, punctuated by the calling card Brandon leaves at each kill.

The scenes of Brandon stalking his victims provide am immense creep factor as he uses his super speed and dons a mask that only could be bestowed to someone with seedy intentions. From there, the kills are pretty damn brutal. The "ouch factor" is pretty high, from glass in the eye to smashing one's jaw on a steering wheel. Others are just brutal in concept, one specific moment involving Brandon's laser eyes and the events leading up to the victim on the receiving end is particularly dark. In the end though, a little more character work could have helped a lot of these moments land harder than they do.

The performances are great, but as is the case with any property that doesn't take the time to elucidate a character's thought process, leaps are made and ultimately motivations are inferred. Elizabeth Banks is the one constant; selling her unending devotion to a child she's accepted as her own even though the film uses only the initial shot of the couple's obvious fertility issues to develop her character. Emotionally, the film's climax has its highs and lows. In the end, a more nuanced take on the relationship between a mother and son could have made for a much more powerful finale. Instead the film opts for a frustratingly abbreviated version of such a conflict to set up its franchise hopes.

Brightburn does well to balance its dark tone with bits of humor while never becoming silly. Banks and Denman do their best to portray conflicted and desperate parents to a burgeoning sociopathic superhuman, but neither the writers nor director, David Yarovesky, slow down to give the characters a depth they deserve. At the end of the day, Brightburn is a suitably dark and brutal trip into the world of a super charged serial killer.

Come Back to Me

Some Guy Who Kills People