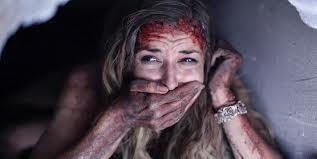 When I watched “Aftershock” by Nicolas Lopez I knew immediately after watching it how I felt. Much like the recent “Evil Dead” remake I went back and forth during the movie but once I left the theater it hit me like a residual aftershock: that was dumb. Pardon my lame and immature word, but it’s the first thought that came to my mind. In big boy words, “Aftershock” suffered from a genre identity crisis and ultimately created a pointless story full of empty character development.

“Aftershock” tells the story of six friends on their trip in Chile. We follow Pollo, Ariel, and Gringo (played by Eli Roth) as they dance the night away at raves. During the day they manage to get in a wine tasting where we learn that Pollo and Gringo do not know each other and are just mutual friends of Ariel. There are countless other “character reveals” sprinkled into the dialogue which brings me to my first problem. This movie tries so hard to create a group of people that we would like and identify with. Shot after shot of the three guys dancing and making little jokes about one another is meant to endear us to the idea that they may be killed. The issue is it felt like they were being shoved down my throat because it couldn’t go down otherwise.

Pollo, who looks like a Chilean Zach Galifianakis, is apparently a ladies man trying to teach Ariel and Gringo how to be confident. This brings in our other three main characters. Irina, Kylie and her half sister Monica meet up with Pollo because they evidently had a great night with him the night before. The idea that any of those girls would be blinded by Pollo’s greasy one liners and shrugs just because he’s confident makes zero sense. I’m all for the underdog getting the girl but at least find someone funny. Bring on problem two, I started checking on my phone if this movie really was a horror film. It is listed as a horror thriller but this first forty minutes feels like an indie homage to “The Hangover”. I understand films that try to build suspense and develop characters during the first act but “Aftershock” seems to have been a spec script for a poorly written comedy that added the “horror” part to the second half.

Eventually the earthquake hits and we finally get to the horror. Much like the character development, they spoon feed it in heaps to the audience by packing as many gruesome moments as possible in thirty minutes. There are many elements added so quickly that become important later that it all felt so random by the end. Without giving too much away, what was lacking from the first half was pacing and that’s also the problem in the second act. I will say that there was an almost “Evil Dead 2” moment thrown in there. Almost. Unfortunately all it made me do was want to go and watch that instead. The deaths are diverse and do break up some of the tension, but it ultimately felt like I was watching a Friday the 13th part eleven where Jason controls plate tectonics to kill faceless partiers.

This was Nicolas Lopez’s first wide release and his first horror movie. Mostly having directed romantic comedies, his lack of experience in the horror genre was apparent throughout “Aftershock”. If he would have spent more time building the suspense of the natural disasters and the other threatening elements then there may have been a passable experience. Developing characters comes through writing their quirks and motivations into the script for the actors to portray correctly. Lopez spent more time just having them on camera saying one liners and dancing. The big pull for “Aftershock” came from director Eli Roth starring and presenting the film. Honestly, if he had nothing to do with this film it would not have gained as much attention as it has.