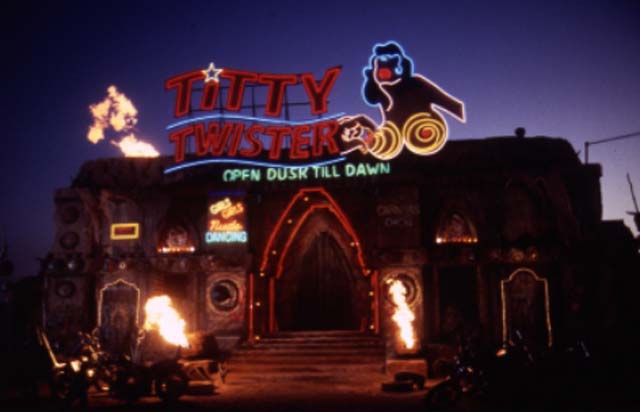 Vampires are all the rage these days. "Twilight", "True Blood", "Vampire Diaries", pretty much anywhere you turn, you can find something vampire related. Problem is, it pretty much all sucks.

Remember when vampires were cool? How they'd turn into giant bats and trick Winona Ryder into making out with another chick and a werewolf like in "Bram Stoker's Dracula"? Or when they were cursed African Princes with awesome wardrobes like in "Blacula"? Or hell, when they were played by guys Leslie Neilsen or Eddie Murphy? Yeah, those were the days.

Now it's all Bieber haircuts, shirtless Swedes and "Dawson's Creek"-esque melodrama. It's pretty sad. If only there was a movie that could cleanse our collective palates and remind us of the days when vampires were sweet. What's that you say? Netflix just put up "From Dusk Till Dawn" for instant streaming?

Yeah, Quentin Tarantino and Robert Rodriguez gave vampires their treatment in "From Dusk Till Dawn" and it totally rules. Not only is there the usual Tarantino/Rodriguez stylings, but there's also Cheech Marin being Cheech Marin, Danny Trejo in vampire form and Tom Savini playing a character named "Sex Machine".

Do yourself a favor and check this out. Preferably with someone who doesn't know it's a vampire movie. Pretty sure their head will explode when that twist is revealed for the first time.