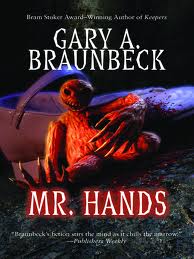 **Important note: NO, this book has nothing to do with the infamous weirdo and horse video by the same name. Just in-case any of you get confused or decide to google "Mr. Hands." I'd definitely add "book" to those search terms - or don't, if you're into that kind of thing. **

Set in the fictional town of Cedar Hill, Ohio, Gary Braunbeck weaves three, hauntingly different lives into a whirlwind of revenge and moral ambiguity. First, we’re introduced to Ronnie who grows up mentally stunted but also very cursed (or blessed, depending on your point of view) with a very unique supernatural gift. Though he was abused by his father and unprotected by a fail mother, Ronnie grows up to see the love and innocence in children, but also the pain in their future. However, when he foresees suffering and agony in a child’s path, Ronnie is compelled to protect them from that dismal fate and kill them out of mercy. Driven by the souls of the children he has saved, promising him how much happier it is where they are now, Ronnie continues his mission and is eventually christened a child serial killer. Ronnie is pained by his obligation to murder children, but shows them how much love there is waiting for them before they experience the cruel destiny that awaits them.

As Ronnie’s destiny begins to change, we meet Lucy and eventually her daughter Sarah. Lucy is a single mother whose daughter is the light of her world. Lucy begins to fall apart when Sarah is tragically abducted by a child predator, leaving behind her beloved doll, Mr. Hands. Mr. Hands is an ugly, unsightly wooden doll with no legs but very long arms that end in monstrous claw-like hands. Lucy wants to hate the dreadful doll but loves it as it is her own since it is the closest thing she has to Sarah. Sarah always said she felt Mr. Hands loved and protected her, therefore, Lucy clings to doll as if it were her lost child. One rainy night, reeling in her grief, Lucy crosses paths with Ronnie and Mr. Hands; unintentionally creating a monster hell bend on unrelenting, violent revenge and driven by her word alone.

The extreme emotions experienced by Braunbeck’s characters in Mr. Hands are real and raw. Ranging from pure, innocent love to diabolical hatred, the reader is torn between agony or empathy as they watch their own moral code begin to gray. In the realm with Jack Ketchum’s The Girl Next Door, and J.T. Leroy’s The Heart is Deceitful Above All Things, Mr. Hands is a supernatural and horrifying tale of suspense that spares no gruesome detail of the terrors and evil lurking in the human psyche. Gary Braunbeck's book is proof that monsters are more than just from your imagination, while exploring the creature anyone can become and the lies you tell to maintain a facade.