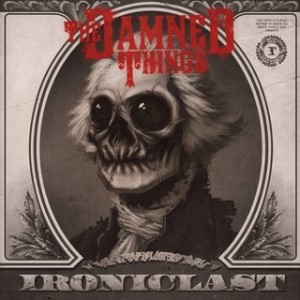 You got alternative rock in my metal! You got metal in my alternative rock! Thus was born “The Damned Things,” a supergroup formed of pieces from Anthrax, Every Time I Die, and Fall Out Boy. Their debut album “Ironiclast” is an attempt to bridge the gap between genres and pump out some classic-rock inspired throaty jams.

I can’t help but give Scott Ian, Rob Caggiano, Keith Buckley, Joe Trohman and Andy Hurley some credit. Coming from wildly different backgrounds, these five musicians have put aside the labels and conventions of genre, risked reputation points with their fan bases and produced an album simply because they like playing music. “Ironiclast” is a brave attempt to break down some walls separating modern rock radio from metal and nothing can take that away.

Unfortunately, “Ironiclast” ends up at exactly the meeting point of those two very divergent musical theologies and not necessarily in a good way. Rather than come out as a synthesis of the best parts of those ideals, it sits in the middle and doesn’t display any particular character. In their best moments (and they do have them,) The Damned Things sound very similar to underground metal veterans Fireball Ministry, who listeners know can be hit or miss as well.

The album’s star is guitarist Rob Caggiano, who continues to prove his versatility by fitting nicely into the pocket of a band totally different than Anthrax. He bends his high-flying style into the classic rock mold that The Damned Things are shooting for and still comes out individualistic in the final mix.

There are many single aspects of “Ironiclast” that are well put together. The riffing, from “Handbook for the Recently Deceased,” to the gritty backbone of “We’ve Got a Situation Here,” is simple but powerful, even if it lacks a sharp touch. The classic rock themes are evident, even if not perfectly executed.

“Bad Blood” is the perfect example of the archetype for this album. It is a big, bold, bombastic song with a huge chorus that ultimately lacks emotional context and therefore throws a mild punch.

“Friday Night (Going Down in Flames)” is the album’s best song and one of its signature singles. While a nicely constructed romp, it too lacks any kind of convincing definition. Keith Buckley’s vocals are clear and precise, but that’s not necessarily beneficial for what the song is trying to project.

I absolutely cannot dismiss “Ironiclast” outright. There are some nice elements, from Caggiano’s evident ability to the easily accessible and digestibly beat-driven songs. Future endeavors by the band may prove fruitful, once they get a little more time to record, discover a sound and develop into something more than a side project. In the meantime though, The Damned Things are slightly hollow and lacking in tangible substance. I will say that I liked the album better the second time through. While I am never a man who rates on a scale of ten, for perspective, this would be a solid 6 or 6.5, but not more than that.