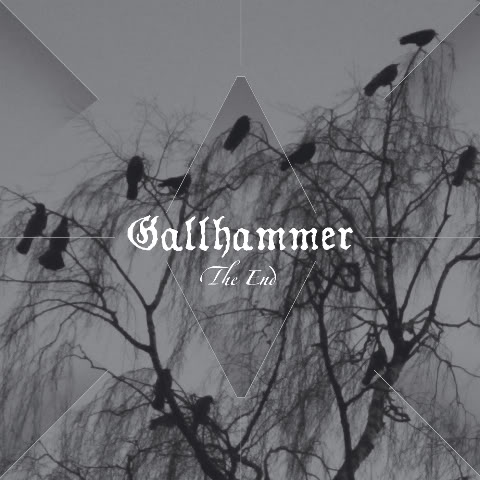 That’s my reaction to Gallhammer’s new album, “The End.” Cut down from three members to two after the departure of Mika Penetrator, the all-girl Japanese metal band has set out to try and push the boundaries of black and doom metal.

What’s become clear about Gallhammer over their existence is that front woman Vivian Slaughter does not give a damn about image, convention or traditional roles. She and the band are much more preoccupied with musical atmosphere and trolling the deep corners and shadowy depths of doom metal.

More or less, “The End” breaks down into three simple categories: fast and repetitive, medium and repetitive, and slow and repetitive. The variation between the three tends to be based on the amount of crust punk influence that is allowed to seep into the writing.

While a tune like the title track is a seven minute exhibition of the slow doom dirge, the track “Aberration” is positively flighty by comparison. The latter opens the throttle and features more punk-style snare drumming and faster riffing, all bound together with a slightly more rhythmic approach. Even so, to check in at one minute intervals in that song is to hear the same progressions at each clip.

Where Gallhammer truly falls short on this new album is in a lack of variety. Some of the press material for “The End” states that the album is a collection of “dark drone music.” Ultimately, that statement can be used against Gallhammer, because the album does “drone” on in more than a few spots. There is little musical versatility between the first track and the last, and zero deviation during any of the individual cuts.

Not as progressively intriguing as Katatonia or as compulsively dynamic as Darkthrone, Gallhammer instead banks heavily on numbing repetition to try and create a feeling of hypnosis. The end result is a song like “Wander,” which is great if you don’t mind hearing the same six notes for twelve minutes. Directly behind “Wander” is album closer “108=7/T-NA,” which is more or less the same thing, but this time is sprinkled with some anguished saxophone and comes in at ten minutes.

I can salute the girls of Gallhammer for forging their own path and not bending to preconception, but that’s about it. Unfortunately, “The End” just isn’t that interesting.