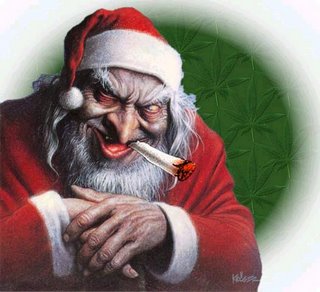 It's that time of year, the holiest of holy's! It's a time of togetherness, family and love! That doesn't mean you can't darken it up a little bit though. What better way to get your loved one to snuggle a little closer than by scaring the crap out of them? So grab that Snuggie your mom gave you for Christmas, fill up the egg nog tankard and cuddle up with your sweetie before the fire place and prepare to have your pants scared off with this list of 10 Holiday Horror Flicks"!

First off? Bill Goldberg as Santa, the son of Satan. Yes, the famously Jewish wrestler Goldberg. If that's not enough, be sure to watch the opening sequence of this movie and tell me it's not amazing. Goldberg killing people all willy nilly is just icing on the cake!

This movie didn't age well. Neither did Pinky Tuscadero. Regardless, it has it's merits. That merit may be, "there are no other horror movies that take place on New Years Eve"... but it's still a merit, right?

Back before she went nuts, Margot Kidder was a sexy little sorority minx. She had some pretty hot sisters too such as Olivia Hussey! Mix this house full of babes with some pretty great 1970's style gore and you have a great little holiday horror flick.

If this isn't the first movie you thought of when you read "Holiday Horror Movies", I question your status as a horror fan! This movie is a classic. You all know it, you all know why. Heck, even the kids love this flick! Go ahead and put it in the DVD player now, you can thank me later.

A nifty little indie throwback, "The Signal" came out with little fanfare. Sure, a lot of you have seen it by now but it's a great little flick that highlights our dependence on all things airwaves. It may be a coincidence that it all takes place on New Years Day but that's enough to get it on the list!

Yes, Jamie Lee Curtis is a bonafied scream queen. How about that hunk of manhood that is David Copperfield though? Hachi Machi!

There is absolutely nothing original about a serial killer dying and coming back as a possessed snowman. We've seen the same setup in "Chucky" and "Ginger Dead Man". If I had to choose, I'd much rather watch this than that crap that Michael Keaton started in though, wouldn't you?

Though "Christmas Evil" is mediocre at best, it has killer taglines like "Psycho in a Santa Suit!" and "Better Watch Out... Better Not Cry... Or You're Gonna Die!"

"Dead End" is another quiet little sleeper hit. I happened across this tale of a family lost on the way to Grandma's House for Christmas and found myself captivated and blown away. It's a quiet little flick with a great creep factor. Plus it has Ray Wise and you really don't get much cooler than Ray Wise.