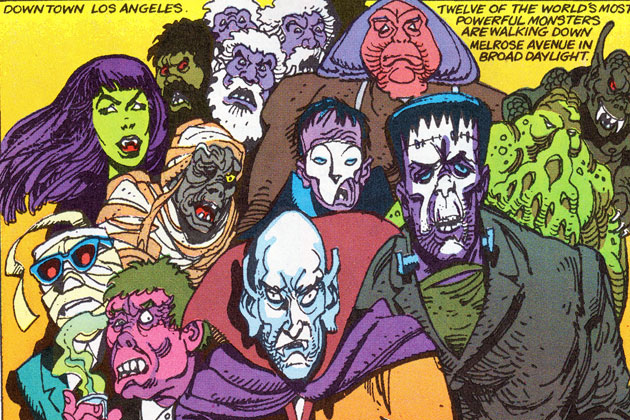 Universal Monsters In Comics: The Phantom Of The Opera

Last time we tackled The Wolf Man in our ongoing series featuring The Universal Monsters In Comics. Today we talk about a character whose status as a 'Universal Monster' is a bit in dispute. However in the studio's (now defunct) sizzle reel for The Dark Universe they included him so the character makes the cut here. Who is that you may ask? A Phantom....Of The Opera. This character did not originate with Universal however most of the depictions we will be talking about today draw clear inspiration from both the Lon Chaney Sr., and Claude Rains portrayals of The Phantom. As with last time we are opting out of straight adaptations, focusing instead on their other appearances or twists upon the story.

This is a strange one, and while I would really not classify it normally as a Phantom Of The Opera story, it definitely includes the only screen accurate drawing of the character. In this comic that appears to just be an excuse to draw scantily clad women, the titular Cavewoman is transformed into a vampire by someone called 'The Vampire King'. The vampire wreaks havoc throughout the small village, eventually he is confronted by 'Drakula' I presume they changed it to a K solely to avoid a lawsuit. Drakula is very clearly the Bela Lugosi version, with the Vampire King even pointing out this fact declaring him a silver screen hack. However Drakula proves superior by forcing The Vampire King into reliving all of his monster movies, and even some he did not appear in. Such is the case for The Phantom Of The Opera who appears in all of his Lon Chaney Sr. glory drawn in immaculate detail. The issue even ends with a dedication to Bela Lugosi himself.

Monster in My Pocket

This comic series is based on the 1989 toyline of the same name. "The Phantom Of The Opera" features in the comic mainly as a background character. The character looks nothing like his film counterpart appearing more akin to Frankenstein with a mask on, however Marvel comics still credited the monsters to Universal during their publication. I was not able to track down the issue itself, but the use of Marvel crediting the creature to Universal seemed noteworthy enough for the inclusion upon this list. The writer on the series is Dwayne McDuffie a notable name in the world of comics, and animation, most notably Static Shock.

A common theme throughout this list has been literary monsters meeting, or fighting other famous characters from classic pulp fiction. This is yet another example of two famous figures clashing. Tarzan vs. The Phantom Of The Opera. Another issue which I could not track down, but I am certain it is worth reading solely to see how the hell they manage to get Tarzan to the opera. Part of an ongoing series written by Dark Horse in the 90s' it will surprise no one that Tarzan does in fact win the battle.

The idea of uniting the Universal Monsters for a type of army unit is not exactly unique. However in asides from ExMortis not a single one brings The Phantom into the fold. This may be understandable given the that the character is just a man with a deformity, no supernatural powers. This version of The Phantom is unlike any in popculture. They use the name 'Erik' which has always been the Phantom's moniker, but the writers give him the last name 'Leroux' referencing the author of the original novel Gaston Leroux. He is a demolitions expert, and his face is shrouded by a WW1 era gas mask. This comic is definitely worth tracking down.