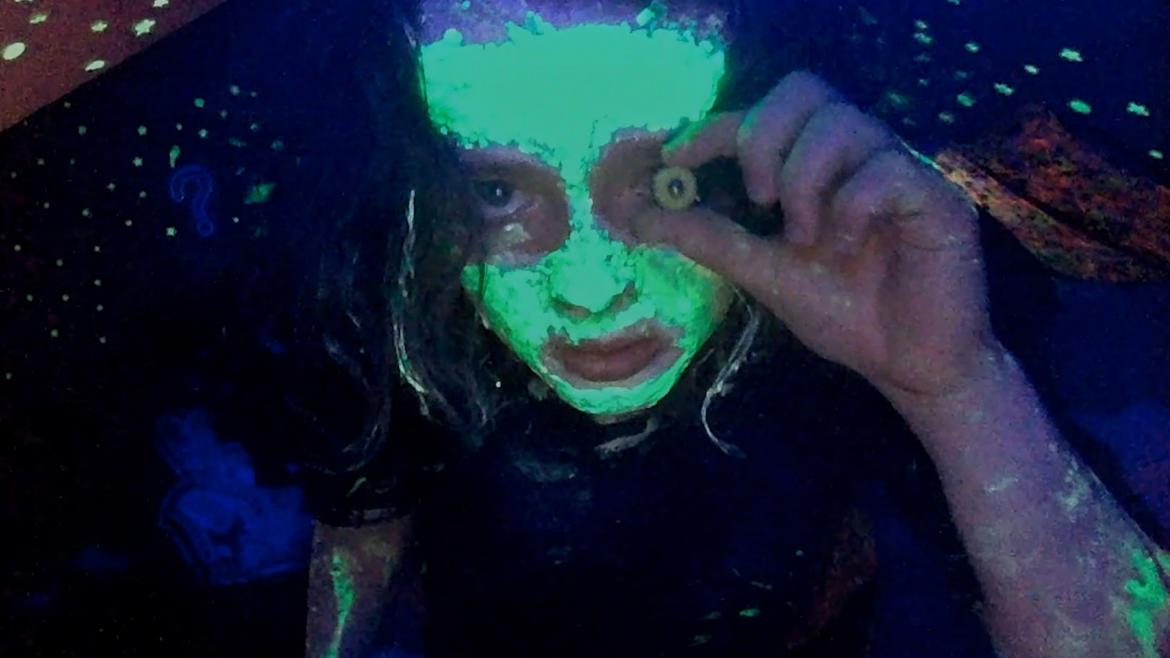 We're All Going to the World's Fair (Movie Review)

The height of the creepypasta era of the internet was a formative time for a lot of genre fans and non-fans alike. Filmmaker Jane Schoenbrun uses that corner of the net to traverse the ache and isolation of teendom in their narrative debut We’re All Going to the World’s Fair, a film that’s quiet, raw, and hauntingly authentic to the dark and lonely areas of internet culture.

Anna Cobb stars as Casey, a lonely girl who has decided to take the “World’s Fair Challenge.” In order to complete the challenge, she must repeatedly jab her finger to draw blood, watch a trippy video light show, and then record what if any symptoms of taking the challenge arise. Casey isn’t sure exactly what to expect from doing the challenge, but she spends her days watching videos from the larger community that vary from users thinking they are turning into plastic to another who says they feel like Tetris bricks are falling inside their body. As she goes about making videos she draws the attention of a user who goes by JLB (Michael J. Rogers), and who is taking special interest in her content. Through their interactions Casey’s videos become scarier as she descends deeper into the World’s Fair rabbit hole.

Many modern internet trends are a cacophony of half cocked dares that have the potential to result in severe bodily harm or at the very least, a bruised ego. Without a lived-in knowledge of where World’s Fair is intending to go, the opening scenes suggest that something ominous and potentially threatening is about to transpire. The element of self harm in the beginning (Casey jabbing her thumb with a pin) conjures ideas similar to that of the Blue Whale Challenge which reportedly required “players” to participate in seemingly innocuous challenges before then requiring them to commit suicide. Schoenbrun mused that while World’s Fair is not autobiographical, it is personal and at least inspired by real life experiences with the creepypasta community. Their film is drenched in ideas nurtured in the pixelated 1s and 0s on the screen and brought to life by a script that quietly seeps into your subconscious and lingers.

Newcomer Anna Cobb is fairly astounding in her feature film debut. Cobb captivates in nearly every scene with even minor facial expressions and non-verbal cues. The entrance of Rogers’ JLB heightens the sense of potential predatory exposure that Casey’s inviting into her life with her extracurricular online activities. This section of the film provides the driving sense of tension as the audience ponders what JLB’s intentions are or in the unlikely event we should expect something truly supernatural to occur. Whether it’s one thing or the other is abundantly clear to the audience as Schoenbrun isn’t particularly interested in trying to outsmart the audience so much as paint an explicit picture of adolescence including the longing to be part of something and the loneliness of feeling disengaged. But the most chilling aspect Schoenbrun explores are the dangers lurking within shady online personas who scour the internet looking to manipulate and groom impressionable users for nefarious reasons.

World’s Fair is a stripped down affair that lives and dies on the somewhat static camera lingering on Casey as we watch and wait to see what she does next. The select exterior shots serve mostly to provide a sense of place that’s not specific, but purposeful in the seemingly disparate locations that are recognizable in both brand familiarity and the slow decay of urban America with boarded up business long since forgotten. These are choices that serve a deeper point that seem to broaden the themes Schoenbrun is toiling in and they speak volumes even in how raw and gritty the film feels.

Schoenbrun manages to project a distinct glimpse into the larger world of creepy storytelling that’s bound to be a cult like hit amongst specific audiences but also a tad too niche for others. We’re All Going to the World’s Fair dabbles in the online habits of teens while providing a window into online exposure to predatory forces, isolationism and loneliness that will ignite conversations in spite of it lacking assertive punctuation to drive it all home.

Movies Like We're All Going to the World's Fair

The Eyes of Laura Mars