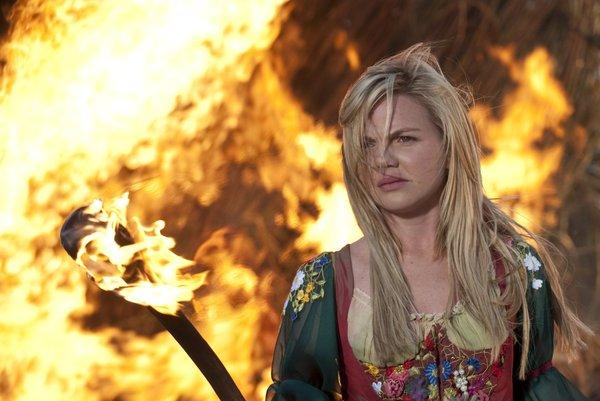 Let’s start this off by saying I’m not going to spend a lot of time comparing Robin Hardy’s 1973 “The Wicker Man” with his latest film “The Wicker Tree”. Surely enough people out there have grouped “The Wicker Man” amongst films such as “Rosemary’s Baby”, “Don’t Look Now”, and many others as a paramount example of prestige horror. It’s a movie that many genre fans and critics point to as an “excuse” for genre films or to show horror detractors that, yes; these movies are worth their salt. But this isn’t a review of comparing this unofficial/spiritual “sequel” to its noteworthy ancestor. Indeed, even Hardy and other filmmakers/talent are more inclined to see the film as having a narrative that inhabits the same space as the first film but without a direct connections.

So what can I say about a film that sits so tiny in the looming shadow of something as large as what “The Wicker Man’s” legacy has become? “The Wicker Tree” is a huge misstep that seems to have zero interest in taking any chances with its themes, narrative, or stylistic execution. This is an utterly safe, boring, sterile movie that pretends to be prodding at some potentially interesting, racy concepts but has no idea what to do with them. Its characterizations are flat and vague. The suspense-building strategies here are flaccid and hardly ever lead to a satisfying payoff. The film is completely void of any sense of mystery or awe, which is remarkable given its heritage and subject matter. It becomes apparent while viewing that the filmmakers involved are very much riding the wave of the “The Wicker Man”, hoping an audience will bring enough of a memory of that film with it in order to fill out a starkly barebones film. “The Wicker Tree” has so little of a personality or identity of its own that while it unfolds it becomes nearly impossible to see it as anything but an outdated, awkward attempt at recapturing the glory days of its predecessor.

Based on Hardy’s 2006 novel “Cowboys for Christ”, “The Wicker Tree” centers on an unfortunately named pop country superstar Beth Boothby (Brittania Nicol) and her fiancé Steve (Henry Garrett) as they embark on an evangelical mission to the farthest-reaching corners of the sinful, non-Christian world in order to convert those heathens to the original Good-Ole-Boy, JC. But rather than installing Beth and Steve in some secluded corner of the globe, they are sent to the Valhalla of degradation: Scotland. Here Beth’s stardom brings the added bonus of televised declarations of faith. This of course doesn’t come without a price as some of Beth’s more salacious earlier media appearances come back to haunt her in some rather hilarious ways. After being shunned and made into a media pariah in Glasgow, Steve and Beth are invited by a wealthy landowner and nuclear power-plant manager Sir Lachlan Morrison (Graham McTavish) to stay in the small hamlet of Tressock. Together Sir Lachlan and his wife Morag (Keira McMillan) welcome the visitors into their openly pagan community that has been suffering from infertility for years. (Oh, yea, and they worship the goddess Sullis who “doesn’t suffer fools”. Ironic touch? I had trouble finding any evidence). The townspeople at first embrace Beth and Steve with a kind of curiosity one reserves for a TV documentary. But of course things don’t go quite as planned as sexual temptation begins to work its way into the couples’ thoughts and the seemingly kind veneer gives way to something more sinister.
As previously mentioned “The Wicker Tree” completely lacks any sort of mystery, suspense, and intrigue. From nearly the moment Beth and Steve land in Scotland we know exactly where they will end up. And I’m not just saying this as a snarky “I’ve seen too many movies” Kenny from “Scream” kind of way. As we watch Beth singing Christian hymns in a chapel we also see two other character flatly state their plans for them. And while there is the possibility the ruse will be found out it becomes apparent very early on that neither Steve nor Beth are skeptical of their situation. Steve even breaks his commitment of celibacy in no time flat after a single, tame flirtatious exchange. (Oh, and some boobs. Those boys just can’t keep it in their pants).

Where “The Wicker Tree” faults the most, however, are in its attempts at making some kind of critical statement on capitalism, religion, American imperialism, and sacrificial violence. Typically I don’t have any misgivings about characters making poor decisions as long as it serves a particular narrative thread or generic trend. This is where I feel suspension of disbelief for genre fans is extremely flexible. But the sheer naiveté and ignorance displayed by both Beth and Steve is exhausting, preventing us from seeing the two of them as full-fledged characters in any way. Their aw-shucks demeanor whittles away at our patience until the two of them become nearly intolerable. Beth and Steve slowly deteriorate into silly caricatures of American life that an angsty teenager might have written after seeing “American Beauty” one too many times. If we are actually supposed to take Steve and Beth’s open acceptance of Tressock as plain stupidity, the film then becomes even more aggravating in its flippant, shallow finger pointing.

I have to admit that I may fully well be missing the joke here. It is totally possible that the sophisticated humor and deep satire in watching Scots line-dance just goes way over my head. There truly are a few fairly funny, dark camp moments but you get the sense no one on set knew where the joke began and where it ends. The complete disregard for narrative propulsion and awkward editing just destroys the film. “The Wicker Tree” is about 15 years too late to be relevant and its boggish pacing, uninteresting characterizations, complete disregard or interest in further exploring themes of sacrificial violence make this one of the least satisfying films out there.