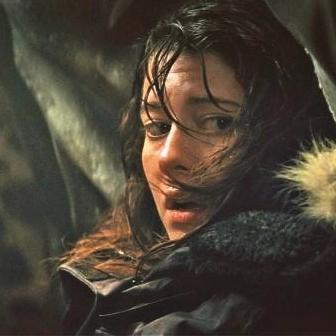 When the trailer first dropped for "The Thing" remake -- ahem, prequel -- the standard remake reaction of, "My God!" instead was replaced with something more like a "Hmmmm..." Though it was clear that director Matthijs van Heijningen relied heavily on Carpenter's film, itself a remake, for inspiration, there appeared to be enough juice left in this concept to support a full fledged predecessor to the 1982 classic. Now, with Heijningen's film opened, it's safe to say that those with initial hesitations should feel at least partially justified.

This new "Thing" ends with the exact sequence of events that precede Carpenter's film: two Norwegian researchers board a helicopter to hunt down a Malamute that has been infected by a shapeshifting alien virus. As the film closes we know the fate of that dog and its pursuers. Heijningen uses his film to lay out the action that leads us to that moment, told almost exclusively through the eyes of American paleontologist Kate (Mary Elizabeth Winstead). Having been coaxed to Antarctica with the promise of a monumental discovery, Kate learns along with the American helicopter crew that flies her in that this amazing find is in fact an alien spaceship, complete with a pilot now frozen in the ice. Assiduously checking off the narrative boxes laid out by Carpenter, the team takes this alien pilot back to its base where it proceeds to escape the ice and begin wreaking havoc.

That "Thing" 2011's trailer would draw so many remake comments should not have come as a surprise to anyone involved with the film's production. There realistically aren't many ways they could have deviated from the basic structure that Carpenter deployed: remote research station, shapeshifting monster, suspicion of everyone. The monster attacks, is destroyed by the crew, only to have it reemerged in the shape of another previous ally.

Interestingly, Heijningen plows ahead without much of an attempt to rewrite this successful narrative. The same moments of tension are deployed, but here usually much less effectively than Carpenter. Instead, the film pushes into a more extreme direction with special effects and body dysmorphic horror. Where Carpenter and his effects crew deployed practical effects and camera tricks that distorted the monsters as they exploded from human bodies, Heijningen turns to CGI so that he might linger over-long on the Lovecraftian aliens that could have been plucked straight out of games like "Resident Evil IV" or "Dead Space." This shift, while unfortunate from the perspective of reduced tension, still achieves its goal of increased horror. Here though the horror is more a shade of awe at the grotesque, distorted human forms than actual fear. The special effects themselves are solid, making these scenes harrowing in a much different way than in other monster films.

At the same time that "The Thing" is unpacking all this mesmerizing alien shapeshifting, it is also sadly unpacking the story of this alien's origins and motives. Part of the genius of Carpenter's film is that by keeping the setting small -- the American Antarctic compound -- he was also able to mitigate any plot holes. Questions about the alien and it's motives never arise because they are never germaine to the direction of the narrative. By keeping the film simple, Carpenter also kept it believable. Heijningen, sadly never even gets that luxury.

By its very nature, a prequel has to explain more than the film which it precedes. That is a prequel's raison d'etre. And with "The Thing," more description and more exposition only leads to more questions. As this new film progresses, the alien/human battle shifts back to the alien ship, still buried beneath the ice. That it still works after 100,000 years is one thing, but why exactly the creature would want to restart it, why it hadn't just done that in the first place, and what it planned to do with a ship buried in the ice are all questions that must be asked because of the plot, but can never really have explanations. The ship itself is possessed of such a strange and unbelievable design flaw -- it's too much describe, but suffice to say the ship is not as airtight as one would suspect is necessary for interplanetary travel -- that it destroys much of the air of mystery or tension and replaces it with incredulity or even comedy.

This is all, of course, the great risk of creating a prequel, particularly in sci-fi or horror -- explaining that which should never have been explained typically leaves less mystery and therefore less room for fear. That "The Thing's" director was able to wring some graphic creature violence out of the affair may be enough to justify the film's existence for many viewers, but it does ring a little hollow, especially living as it must in the shadow of a genre classic. This new "Thing" is not completely without its charms, but it treads too dangerously close to Jar-Jar territory to truly be considered a success.