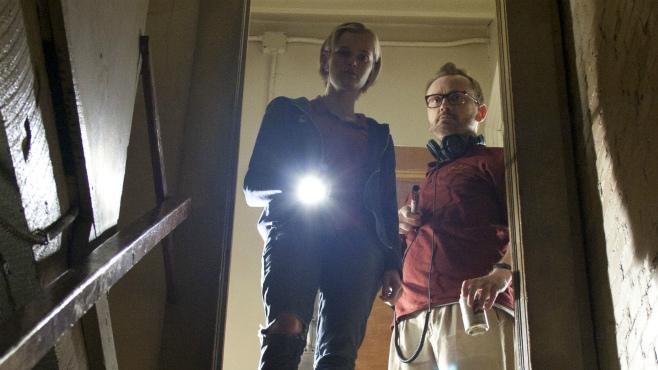 "The Innkeepers", the latest film from independent horror director Ti West, does absolutely nothing to quell the criticisms that I had back when his last film "The House of the Devil" was released. In fact, in many ways it can be considered a step back, a frustrating development for the career of a guy who seems genuinely enamored with the horror genre and championing its films and fan community. "Innkeepers", recently released on a limited basis in theaters as well as On Demand, follows two young people tasked with working the desk at the Yankee Pedlar Inn, an old hotel, for its final weekend of operations. With their boss out of town, the two co-workers are left to their own devices. For Claire, played by up and coming genre actress Sara Paxton, this means lamenting her station in life; a college dropout stuck in a dead-end job with no hope for finding meaningful direction. For Luke, played by Pat Healey, that means flirting with Sara in his own subtle, awkward way, while doing his best to gin up publicity for the hotel by proving an old ghost story to be true. The hotel has a few mysterious strangers who have wandered in for a room as well. Leanne Rease-Jones (played by "Top Gun's" Kelly McGillis) is a washed up actress who now finds herself in touch with the more spiritual side of life. George Riddle, known only in the credits as "Old Man", plays a wanderer headed back to the site of his honeymoon for one last night with the memory of his dead wife before the hotel is torn down forever. Spurned on by her boredom and curiosity, Claire begins to delve deeper into the mythos behind the ghost of the Yankee Pedlar Inn. As it turns out, years ago there was a woman in the hotel who died under mysterious circumstances. As you might have guessed by now, she's hung out at the hotel all these years, and through the use of EVP equipment, Claire begins to pick up on her subtle messages from beyond the grave. I'd love to come up with a new, more clever way of criticizing "The Innkeepers" than I did for "House of the Devil" but to be honest, the basic thesis remains the same. Ti West is an incredibly talented director who has correctly identified all of the technical ingredients that go into making a great horror film; including fluid, haunting cinematography, a strong main musical theme, and meticulously choreographed scares. The problem when you watch his films is that what's missing is even more evident; intriguing characters, visceral shocks, and most damningly, a fulfilling plot. He's done so much homework trying to break the perfect horror film down into a formula that he's forgotten what it really takes, heart and soul. Although to say he's forgotten is maybe misspeaking, "willfully left out" might be more accurate. This manifests itself in several ways. In "House of the Devil" we're made to sit through a 5 minute long scene of a girl dancing around listening to a walkman, the climax of which is her breaking a vase. Masterfully shot? Sure, but completely superfluous to the plot or the viewer's overall experience. In "The Innkeepers", we're treated to maybe a half dozen tracking shots of Sara Paxton slowly walking down a hallway, and then being scared by a loud noise which usually ends up being her co-worker, Pat. It's as if he's put all the care in the world into selecting the perfect way to frame a shot, and never bothered figuring out what it has to do with the larger film. Ultimately, I'm not sure what "The Inkeepers" wants to be. Лучшее букмекерская контора пин ап - высокий шанс на выигрыш. A slow-burning, 70's style ghost film? It's not scary enough for that, by a mile. I did detect a few things that my brain interpreted as jokes, even if I didn't find them particularly funny. One bit showing Claire trying to one-hand a nasty garbage bag into a dumpster did make me chuckle, if only because I could relate. In fact, Claire's character comes with much wasted potential for relatability. In this type of economy, who can't put themselves in the shoes of someone working a go-nowhere job just to pay the bills? Unfortunately, more character development is tossed aside in favor of more, you guessed it, tracking shots where nothing happens. Until he graduates from the "Written/Directed/Edited by…" phase of his career, a phase in which he's happy making ultra low-budget films in exchange for 100% creative control, Ti West is never going to reach his potential as a director. And despite my review, I think he has all the potential in the world. Of all the low to mid-level horror directors out there today, Ti West may just have the most potential. But until he decides he has something to say other than putting on a tech-demo of 30 year old horror cliches, he's never going step outside his comfort zone and reach the heights he's capable of. Unless of course his goal is to make the vein in my forehead explode, because his films succeed wildly on that front.

Deliver Us from Evil

Along Came the Devil 2