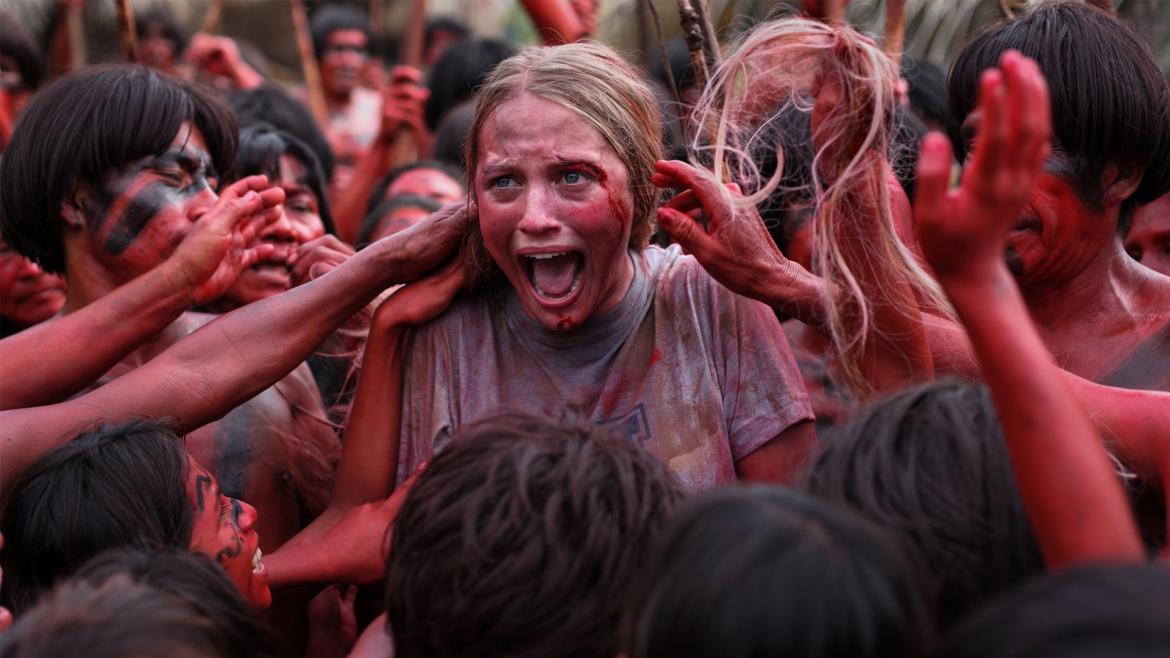 There is a joke in Eli Roth’s The Green Inferno that relies on the audience’s familiarity with one of the possible side effects of smoking pot. Now being of the horror-loving sort around the BGH offices we’ve seen our fair share of slack-jawed, lovable burnouts that often stand in as a sort of audience surrogate. But pot jokes and cannibal films each have steep points of entry. Even if you are aware of what the iconographies of these things are there’s not much inherent in them that will convince uninterested parties to appreciate the delicacies of graphic rending and blunts.

Upon first glance The Green Inferno is like an uphill climb for those who are not already steeped in the moral depravity on display in cannibal exploitation films. But such graphic representation is based largely on the stark, unapologetic, and realist aesthetics of the acts on screen, something which cannot be replicated when considering the terms of production. (Thankfully killing a large turtle on screen is less acceptable). Though The Green Inferno goes to great lengths to replicate the chaotic, seemingly random violence of those films, it also offers a few new elements to enliven the sub-genre.

Justine (Lorenza Izzo) is a college freshman who fancies herself a burgeoning political activist. Joining up with a social justice group lead by Alejandro (Ariel Levy) Justine finds herself on a sojourn to the Amazon river in Peru to stop deforestation efforts to extract natural gas. But after a plane crash leaves the group stranded in the rain forest they are beset upon by an isolated tribe of cannibals who begin to do what they do best.

Resurrected by the Blumhouse horror juggernaut Roth’s return to the director’s chair left many a horror fan wondering if his follow up to 2007’s Hostel: Part II would satisfy their hunger for viscera (the last and only cannibal pun in this review).  Similar to his previous work, The Green Inferno retains some of Roth’s brand of slippery xenophobia and a sense of humor which at times sounds more like the recitation of a previous night’s bullshittery between friends rather than natural dialogue.

Teetering into sexually violent territory the film’s primary piece of thematic foreshadowing alludes to female genital mutilation by which Justine and friend are appropriately outraged. It’s the sort of thing introduced with the sound of a metal gauntlet hitting the floor with ringing echo singing "Get ready to see this later". Upon being asked what motivates her involvement in Alejandro’s group, Justine claims a concern in “women’s rights”, a position that extends to her aforementioned disgust at genital mutilation in third world countries rather than the very real concerns of rape culture, unequal pay, and representation still relevant in our society. Fortunately Izzo’s performance stands above the plot hurdles she encounters, balancing her naïveté with survival capabilities in ways that are more captivating than expected.

Despite the film’s meandering stabs at politics and an unnecessarily complicated third act there’s a vigor in its production and attempts at social critique that hold The Green Inferno afloat in a way denied by its Italian predecessors.  Roth and fellow screenwriters Guillermo Amoedo and an uncredited Nicolás López draw a correlation between Justine’s experience with social justice as yet another form of self serving exposure on social media. That the filmmakers provide antagonistic elements other than the cannibalistic tribes people is a welcome addition to the abject gore.

And though The Green Inferno never figures out how to answer the genre's inherent cultural and racial representation problems it is, if anything, an interesting attempt at revitalizing an exploitation artifact in the midst of a possession genre overload.