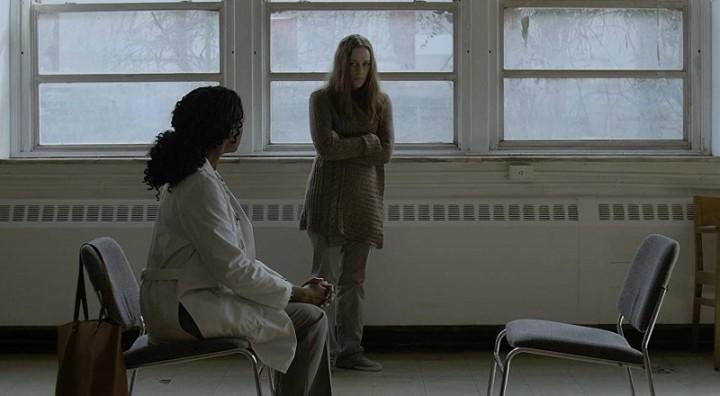 By definition genre filmmaking must be comprised of recognizable tropes and themes. After all, inventiveness thrives in the confines of the probable—the subversion of the likely which shocks our consciousness by showing us something truly original. It is a playground of the familiar the filmmaker may use. This is one of the true powers of genre filmmaking. The audience instinctively knows (or thinks they know) what to expect before encountering a novel turn. In the labyrinthine world of interesting and transgressive genre filmmaking; The Dark Red is a straight hallway.

The film begins with a heartbreaking and harrowing scene of a grimy and neglected toddler being reclaimed from a chest in a trailer where her mother lays dead. Flash forward to Sybil (April Billingsley) who is in what we assume is a mental institution as her doctor and she share multiple therapy sessions. During these sessions we uncover many things including Sybil's professed ability to read people’s minds due to her special blood type. We also learn she believes a murderous cult that has stolen her baby.

The film wants us to question whether these are the delusional ramblings of a person with schizophrenia or if something nefarious and supernatural is actually happening. This has become a tired and in many ways insulting, ultimately futile trope, especially when nothing new is being added to the mix. The issue is that implicit in the fabric of the film, we know the answer before the question is even posed, a question The Dark Red continuously asks (again and again). Even when we are given emotionally resonate images and moments of love for the main character the outcome is telegraphed so heavily you wonder why the filmmaker even bothered to attempt to conceal it. It’s a shame because there are some decent performances here and a straight forward action/thriller without the impotent, half-hearted deceit slowing it down may have actually been exciting.

The Dark Red becomes a tired regurgitation of better films without a clear thrust to captivate the audience.