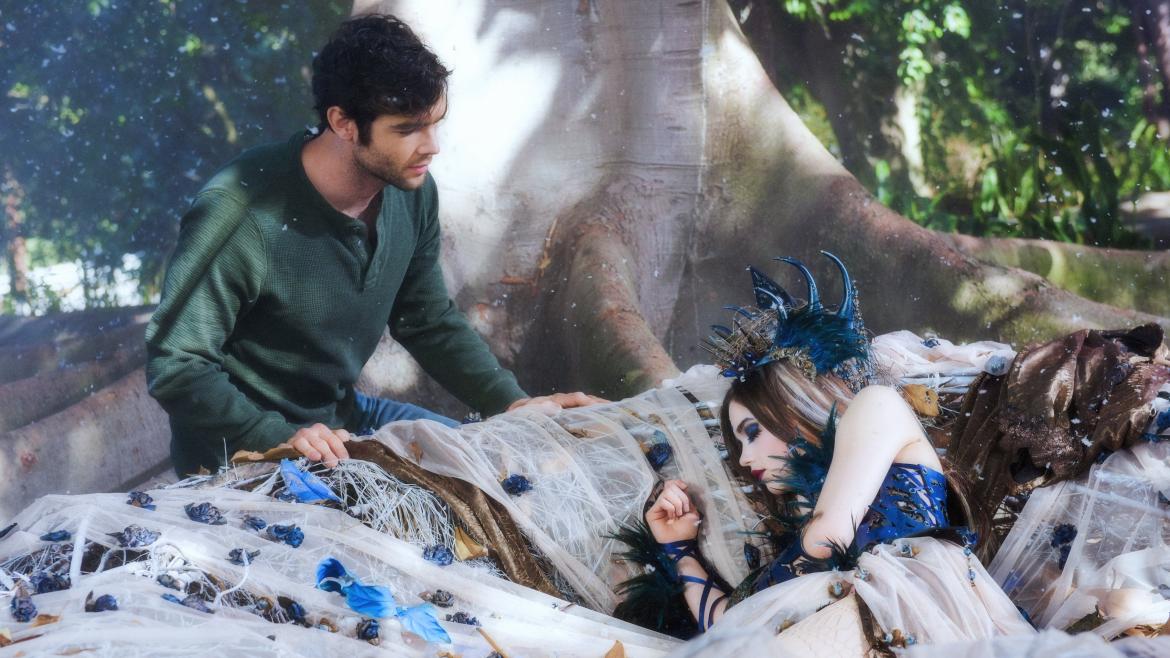 As a horror fan, your free streaming options can be incredibly limited. Most of us have likely scrolled through the bowels of Netflix’s horror section, hoping to make the right decision between the endless cadre of straight to VOD horror that inundates most online platforms. So before we even get into talking about this film, try to place yourself there. Set your expectations appropriately. Are you there? Can you feel the desperation and resignation? Good. Let’s begin.

The Curse of Sleeping Beauty opens on what can only be described as a mid-2000’s music video, full of nonsensical imagery but stripped of the yarling butt-rock that surely was meant to accompany it. A young man wanders through a desolate wasteland, only to find a beautiful young woman asleep in a canopy bed surrounded by a lot of really mixed symbols. After approaching and stroking the hair off this sleeping stranger’s face (creepy) he wakes up in his dingy apartment, suffering from sleep paralysis and super bummed that he didn’t get to kiss that unconscious chick.

We quickly learn that in the real world Thomas (Ethan Peck) is a mopey loner artist seeing the most stereotypical therapist the world has ever seen. It is revealed Thomas has been having similar dreams regularly. All of that changes, though, when he is informed that an uncle he never knew he had recently passed away and left him a sizable home and the surrounding gardens. After going to “check things out” Thomas inexplicably decides to just move in, and creepiness ensues. Is the house haunted? Is his family cursed? Will he ever get to make out with the girl from his dreams?

As we start getting into the plot of this movie, it becomes apparent that the film’s writer/director has only a cursory understanding of the mythology and theology upon which he is trying to build the story. The curse seems to include jinns and demons (Azazel gets name-checked specifically), with little to no care for the fact that the two come from specific religious traditions and have their own meaning and histories. The film is not aided by the fact that central progtagonist Thomas, aside from being Gregory Peck’s real-life grandson, is a pretty charmless vacuum, sucking any chemistry or stakes out of just about every scene he’s in.

This film does include some neat visuals around Briar Rose (India Eisley) and her costuming, as well as some of the creature design, but the plot is not able to hold these elements up and string them together in a cohesive way. And it really can’t be overstated how much the very idea of a man kissing an unconscious woman to “save” her is when set in current times. It doesn’t help matters that the actress playing Rose is a full seven years younger than Peck (and looks like she could be younger).

As far as Netflix streaming options go, once you’ve exhausted all of the good stuff, there is a lot of fluff to cut through. This is by far not the worst of it. There are some interesting costumes and a few cool scare sequences that almost work. If you already have a fear of mannequins, let me tell you, this movie will not help!

The Autopsy of Jane Doe