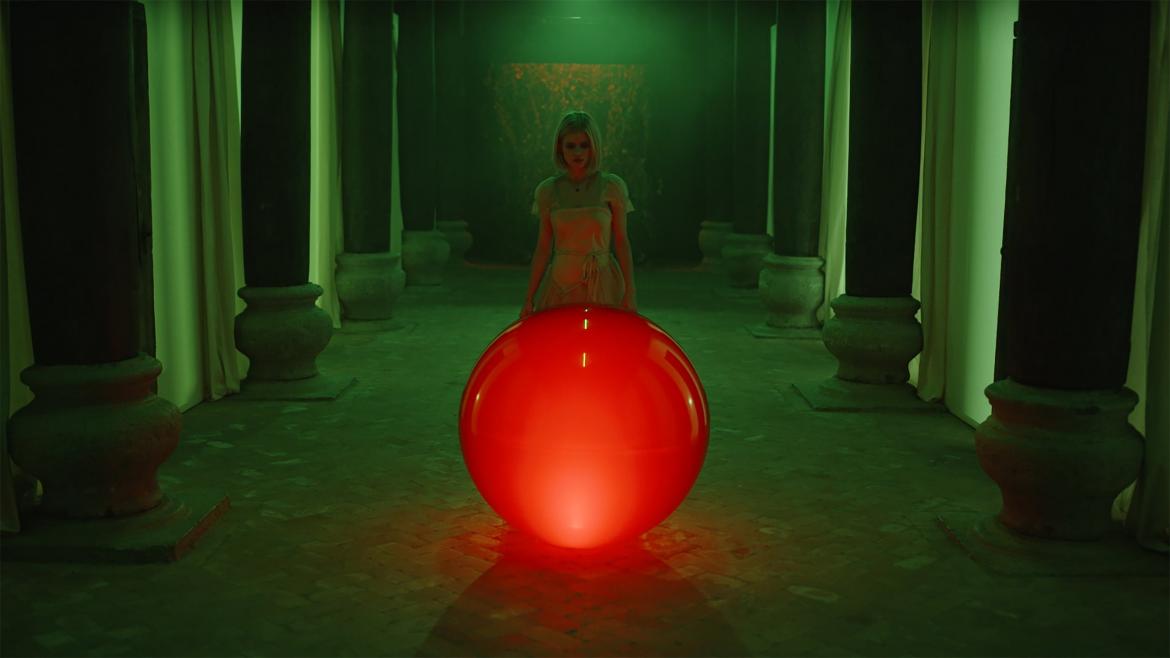 Horror fans may know Carlson Young from her turn on Scream: The TV Series, where she played Brooke Maddox. What you probably didn’t know is that Carlson is a huge horror nerd, and that she especially loves esoteric, foreign horror. When she introduced her feature debut, The Blazing World, at Sundance this year, she shared her love of the genre, and how deeply personal this project was for her. She was able to present a short film of the same name at Sundance three years prior, and her enthusiasm was evident as she prepared the audience to experience her full vision.

The Blazing World stars Carlson as a young woman named Margaret. When Margaret was a child, she was playing outside with her twin sister, catching lightning bugs until the two separated. Margaret approached their house and, while looking in a window, saw her parents arguing viscously. Stunned by her father’s brutality, she ran back towards her sister, only to find her floating facedown in the family pool. When her parents heard her screaming, they ran outside, but her sister was already gone. As her father (Dermot Mulroney) pulled her sister from the water, and her mother (Vanessa Shaw) wailed, Margaret saw something. There was a large black portal, with a man in front of it, and he was beckoning to her. He took her sister away, and there was nothing she could do.

This flashback sets the tone for the remainder of the film before we are introduced to Margaret as a young woman. She lives in the city, attends college, and maintains a strained relationship with her parents. She has continued to see the man who scared her all those years ago (Udo Kier) and she is convinced that her sister isn’t really gone, but is stuck somewhere she cannot go. She watches local access TV about planes of existence and takes notes, as though if she just learns enough she can bring her sister back. Margaret’s parents are moving out of the family home and they want her to return to collect any of her things that she’d like to keep. Unfortunately, going back to the site of the trauma is going to take her to places that she could never anticipate.

Young’s film takes its name from the 17th century work of fiction by the same name, written by Margaret Cavendish. Academic Steven Propp called the piece, "the only known work of utopian fiction by a woman in the 17th century, as well as an example of what we now call 'proto-science fiction' — although it is also a romance, an adventure story, and even autobiography." While the film bears little resemblance to the original work, they do have one important thing in common; both stories follow a young woman who is thrust into another world that is so different from her own, but also so familiar. The film’s second act is set in this other world, where Margaret speaks to Lained (the scary man) and sets out on a quest to find her sister. She meets reflections of each of her parents and sees rooms that appear to approximate ones in her own home, but she finds so much more.

The parts of The Blazing World that are set in this other realm are quite stunning to look at. At points, the film feels very much like a ballet or a fairytale. There is even a sequence which incorporates a piece from The Nutcracker. Much of this second act could be a spiritual successor to Alice in Wonderland and, in fact, at times the film feels very like that tale.

For all of its style, the film is lacking in substance. Carlson Young places herself at the center of the filme, and it doesn’t seem entirely clear that she is up to the challenge. And there are long sequences that appear to only be there because they look so cool, without telling us much about the narrative or what Margaret is feeling. It is clear that Young has an eye for visuals and that she is passionate about what she does, but there is still growth to be had. Every moment of the movie is so earnest and sincere, but it rarely felt real. It was too easy to get pulled out of the film when it needed so desperately for you to get lost in The Blazing World.