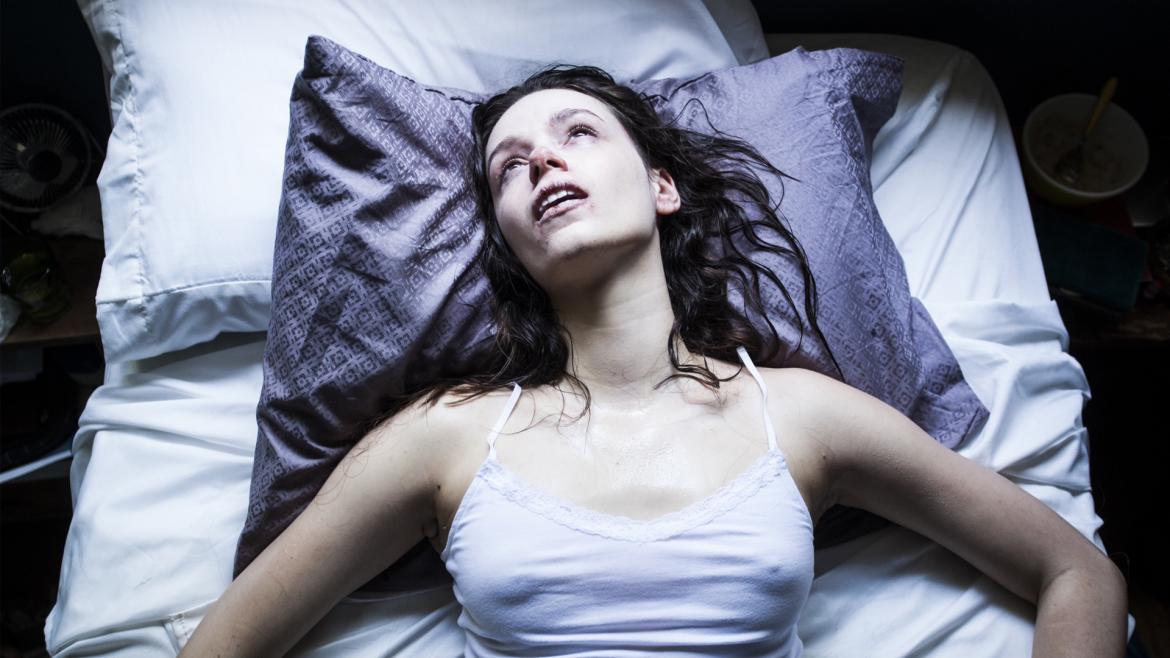 Starry Eyes offers yet another version of the Faustian narrative exploring the dangerous repercussions of unchecked ambition. Sara (Alex Essoe) is an aspiring ingénue struggling with some masochistic tendencies. After a series of failed auditions, and some not too subtle, petty emotional abuse from her cohort, Sarah successfully lands a few callbacks for a new horror film from a once renowned movie studio. But when Sarah is met with the sexual advances of the film’s producer she is forced to choose between her integrity and a “gateway role” that could make her career and possibly take her soul.

This of course would be more of a problem if Sarah’s alternative was at all appealing. When Sarah isn’t spending time working at a Hooters knock-off called “Big Taters” (managed by the always delightful if slightly skeezy Pat Healy) she’s moping around Hotel White Privilege with some rather detestable “millennial” friends. See, we know they’re millennials because they talk about Instagram, there’s a ukulele, and they make fun of themselves for being millennials. The insufferable crushing weight of all this shallow irony is immense. When some kindness is exhibited toward Sarah it is either with the assistance of drugs, unrealistically saccharine, or is framed within the claustrophobic, dim back offices of “Big Taters”. At her auditions she’s legs and tits. At her job she’s legs and tits. And at home she’s a punching bag.

Such an environment would be beneficial tonally should Starry Eyes function as a satire of deeply dystopian proportions. There certainly is a layer of deep melancholy in Sarah’s complete absence of choices. However the film is without a convincing conscience voice that counterbalances Sarah’s actions and the nefarious occult project masquerading as a movie studio. Sarah also lacks any sense of history or even a baseline characterization from which we can develop emotional engagement or empathy. She is a cluster of simple emotions and desires housed in an objectified body. And while character distance may serve a purpose, Brechtian this film is not.

Essoe’s performance should be noted for an incredible amount of physicality that transcends what little she has to do. At times her capacity to work with effects and embody various stages of emotional extremes recalls Jeff Goldblum’s Seth Brundle. Her transformation carries with it all the horror, revulsion, rage, and sadness one can imagine. Assisted by Matt Falletta’s special effects, the film creates some brutal, mushy, and at times sublimely beautiful sequences.

Starry Eyes fancies itself a satire of Hollywood practices that morph people into plastic eye candy. But with some flaccid, repetitive writing and confused plotting the film never quite remakes this narrative in its own terms. Essoe’s performance and the film’s overall visual style nevertheless end up earning a melancholy conclusion clad in a fashionably heathered, blood soaked, worm-covered t-shirt reading “Reap What You Sow.”