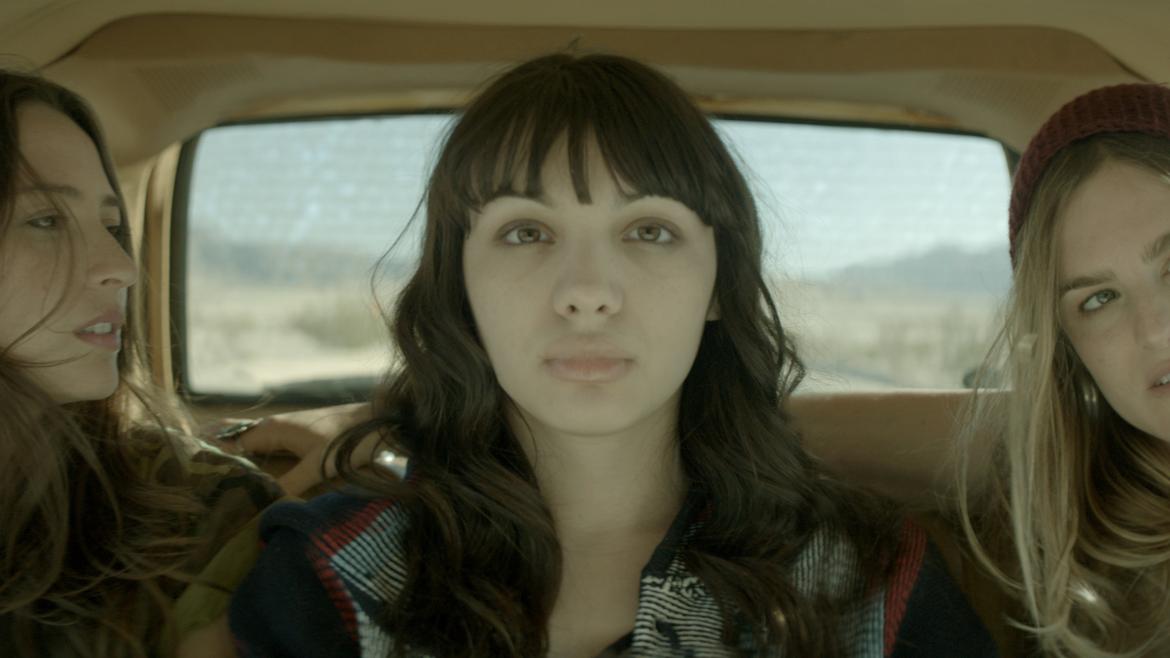 The road trip has come to symbolize numerous things in the milieu of cinema USA. It’s freedom, self-discovery, escape, or denial. Whether from Rey, Hellman, Peckinpah, Malick, Reichardt, or as depicted in a sea of sex comedies, horror stories, or motorcycle gang flicks, the road has unspooled across celluloid landscapes as yellow paint races by and voluminous clouds however in the distance. Though far from specific to the U.S. such a story had come to inform many New Hollywood filmmakers and their subsequent acolytes. And at their core, they are films about uncertainty. For what gold or coiled snakes would be just around the next curve?

Southbound, the latest horror anthology from some of the filmmakers behind the V/H/S series, attempts to take the horror movie road trip template into another dimension. Set on a long stretch of desert highway in the southwestern United States, five separate films interweave in mysterious ways. Two bloodied and traumatized companions are on the run from something. “The White Tights”, an all female rock group, grab a ride from an overly cheery couple when their touring van gets a flat. A motorist on his way home makes a mistake he’s desperate to correct. Stomping through seedy bars, a grizzled, shotgun-toting ruffian hunts for his kidnapped sister. And lastly, a family of three is besieged by a group of masked strangers while on vacation.

Southbound achieves the Sisyphean task of reinvigorating the horror anthology, keeping the form from feeling entirely entombed just as the inventive luster of the V/H/S series begun to dim.  The film boasts a wealth of creative persons behind some of the genre’s more interesting work including a growly voice over narration from Larry Fessenden and the producers from Dark Sky Films (Starry Eyes, We Are Still Here, Late Phases, etc.). But it is the commitment with which the collective of filmmakers utilizes the film’s founding setup that makes Southbound a breath of fresh, dirt-clotted air.

Following the debacle that was The Devil’s Due, Matt Bettinelli-Olpin and his Radio Silence cohort seem to hit a familiar stride with their work, excelling in a tongue-in-cheek sense of humor coupled with fantastical effects work (though the segment may seem a bit familiar to those who saw Isaac Ezban’s El Incidente).  Roxanne Benjamin’s tale of strandad musicians has the sort of bohemian, hedonistic fun we’ve seen in movies past but with just enough of an allegorical edge to give the action heft in its truncated form. And while Patrick Horvath’s sibling tragedy offers some of the anthology’s more intense grime and outright juicy demon slaying it’s a rushed segment with a setup and conclusion that never grant its characters much room to breath or develop.

David Bruckner’s short, in which a driver accidentally strikes a pedestrian, stands as Southbound’s shining sequence. Titled The Accident, the short bridges the highlights of the other segments to the founding principle that guides the anthology as a whole. In this Job-like narrative the driver, Ethan, is confronted with the consequence of his own personal actions in the confines of a space that he is incapable of penetrating despite his quite literal tether to technology as signified by the constantly dangling ear bud cords.  Bruckner presents a pointed piece of satire that’s bolstered by an obsidian sense of humor, unsettling gore, and a keen performance from Mather Zickel.

Southbound makes a point of living or dying by the strength of it’s founding conceit, a seemingly nondescript stretch of highway and the macabre events that happen to people on it. Populated with maniac simpletons and rural bumpkins this derivative template is as tired as it is out of touch with its portrayal of small town, non-costal, United States. The team behind Southbound, however, offers a landscape that is as unforgiving and immoral as the supposed antagonists. Psycho killers and otherworldly spirits there may be but it is the torturous sense of infinite repetition that elevates the film as a whole. Rather than borrowing the concept as setup, the filmmakers have twisted a slice of Americana into something familiar yet new, making the existential wanderings of the road movie explicitly horrific.

Come for the movie. Stay for the glorious sex-o-phone in the closing credits.

It's My Party and I'll Die if I Want To