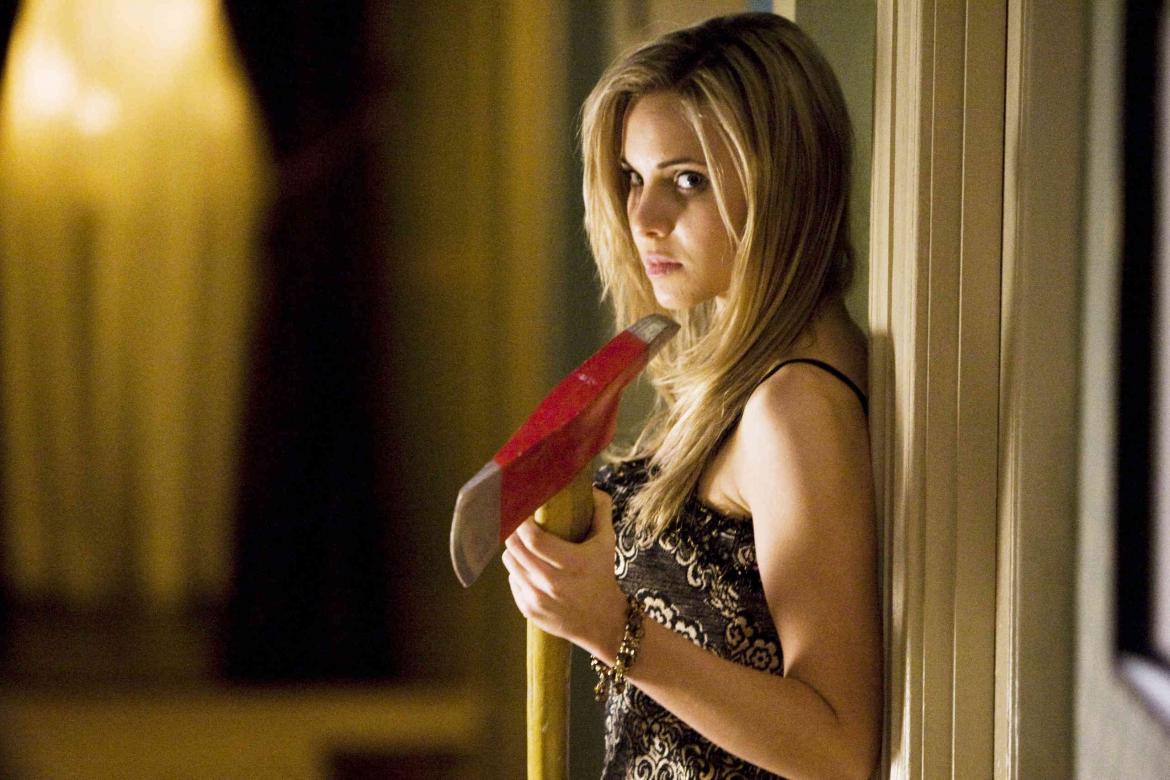 If, like me, you've been waiting for a movie to come along and blow up the myths and hypocrisies that surround sorority life, you can, sadly, keep waiting. However, if you've been waiting for a movie that panders to the basest, most exploitative stereotypes of college students and sorority girls in particular, you my friend are in luck, because "Sorority Row" is just such a film. It is also -- sometimes seemingly as an afterthought -- a modestly competently neo-slasher. Judged solely on its own merits "Sorority Row" barely pushes the quality bar above "tolerable," but taken in the context of recent horror releases, and more specifically when judged against other recent slashers, "Sorority Row" is serviceable, and even at times an enjoyable mess.

As a loose remake of the 1983 film "The House on Sorority Row," this airbrushed college romp uses a prank gone wrong as its jumping off point. When a silly boy cheats on one of their sisters, the women of Theta Pi decide to get revenge by giving this unsuspecting gentleman some fake date rape drugs that he can use to sex-up his spurned lady. It's all a ruse though, and when the young woman starts foaming at the mouth, the girls all rush in and accuse the poor guy of killing their friend. They all play along to the point that the sap actually does commit a murder, albeit unknowingly at first. Now, all a party to the guilt, the sorority sisters turn to their sisterhood pledge to enforce the cover up. And then they make the body disappear so they can all graduate and live happily ever after.

The only hiccup in their plan is that a sorority house secret has the survival time of a six pack of beer at a high school house party. As mortar boards and gowns are being donned, bodies begin piling up. Someone has waited till the last possible weekend to make amends for the Theta Pi's mortal secret, and first time director Stewart Hendler dutifully marches out many, many candidates for slasher villain. While each is, in its own way, plausible, they are not compelling. This is largely because each is as impersonal and replaceable as the one before. The same can be said of the Theta Pis themselves, who fit quite snugly into pathetically worn categories: there's the bitchy queen bee, the nerd, the slutty drunk, the Asian one, and, of course, the innocuous "nice" one. They are sketched lightly enough for us to notice their deaths, but certainly not any more.

For a lot of horror fans, the decision by the film's backers to go the R-rated route may be seen as a victory, and certainly it allowed Hendler and company to show a little more skin and violence. Though this decision does at least push "Sorority Row" past the sexless and clawless likes of "Prom Night," ultimately, much of the hard-R content feels gratuitous and poorly deployed. It's titillating, sure, but to what end? No expectations are upended, no boundaries are explored, no clever exploration emerges. Instead, some mediocre gore is spilled and nubile flesh is bared in the service of little beyond crassness.

From the film's opening montage, where we travel through the Theta Pi's house amid a back-to-school party of the "slumber party" variety, it's tough to shake the feeling that every moment of the film is a calculated attempt to cater to some studio executive's idea of the horror community, i.e. young straight men with no higher aspirations than seeing a bare breast.

In this opening scene we pass by set pieces of lingerie-clad co-eds pillow fighting and chugging beer, up to a bedroom where even more lingerie-clad ladies take shots and sass one another before checking in on a video of their rapey-prank. It was, quite literally, the most extreme vision one could conjure of a sorority party, a vision that may have only previously existed in an adolescent boy's imagination. If this was a set up to some over-the-top meta-slasher, filled with inside jokes and winks to exploitation past, it might have been a brilliant scene. But assessed on the film that follows it feels as lifeless and sexy as a blow up doll.

It almost seems silly to sit here and bemoan the worthless titillation of a film called "Sorority Row." But the product on the screen speaks to a cynicism that seems to creep into films like "Friday the 13th," "Prom Night," or their freshly-scrubbed, MTV-audience-tested brethren. It wouldn't be fair to accuse the creative team or actresses involved of not being engaged -- and yes, "Sorority Row" may find a happy niche as a modern slasher with some over-stimulated kitsch value -- but it's hard to call the final product anything remotely approaching good.