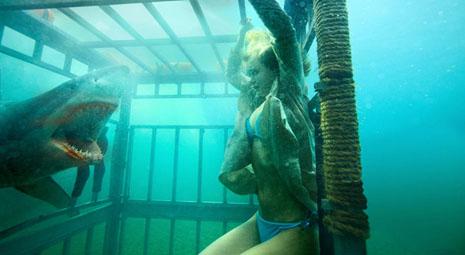 I’ll be upfront here. This is less of a review and more of an autopsy on “Shark Night 3D” as a film but also the critical response to it. First, Let’s take stock of what all “Shark Night 3D” had going for it. You have David R. Ellis directing, someone who should know the pitfalls and perils of constructing a “deliberately bad” movie after his experience with “Snakes on a Plane” and “Homeward Bound 2: Lost in San Francisco”. Like last year’s “Piranha” the film is marketed as that best sort of tongue-in-cheek-title-says-it-all kind of manner. It’s up front; you know what you’re getting into. “3D” is a part of the official title as well, once again, playing up the film’s sensationalist qualities. OH! And there are maniac hillbillies in there as well! Seriously, what could go wrong in a movie with a horde of sharks, college students, and hillbillies!?

You can guess the set up. We have a group of college friends who are off to one of the group’s family’s homes for an end of the year party. That’s really all you need in this and, frankly, that’s all you’re really going to get. Nick (Dustin Milligan) is our main protagonist medical student cum reluctant hero/lover boy. Sara (Sara Paxton) is the former resident of the lakeside town and seemingly sex-neutral girl with a past (intrigue). Sara provides us with the aforementioned Roman bathhouse of decadence. Then you got your slutty/sex positive girl, douchey guy, nerdy guy (who is also oddly kind of a dick), and our token black guy who is only at college because he got a football scholarship (really?). Finally you got your hillbilly antagonists one of which, Dennis (Chris Carmack), has a passed relationship with Sara. And did I mention sharks in the salt-water lake? Oh, yeah, the hillbillies put them there with cameras attached to them so they could sell snuff movies of sharks attacking people.

It’s derivative, surely, pulling generic tropes from creature-features, slashers, and some slight revenge movie stuff. But what I found particularly irritating about this film is the sheer lack of momentum, humor, and gutsiness. Jokes made at the expense of pointing out Nick’s inability to approach women are never funny and near some homophobic territory. The group of friends seems entirely uncomfortable with one another and anxious. The 3D is put to use best when photographing underwater bubbles. While a lot happens in this 85 minutes of screen time, much of it occurs in a completely affectless manner. People die or boats blow up with a caviler shrug. I found myself checking the clock a few times. I could go on about the lack of character development and the inability to care or empathize with any of these people. Certainly, some of the performances are stilted and awkward especially when the actors are told to yell at each other for no particular reason. A number of the kills involve people falling into the water and some red waves springing up or sometimes we don’t get any waves at all. There are some air jaws moments but they are about as thrilling as seeing water splash.

But these are only a taste of the real problems here. After all, movies like this are best served when conventions are broadly painted like this. As previously mentioned, the film has been out since September 2nd so there has been plenty of time for the critics to cash in on what makes this thing so awful. And the focus is on the film’s lack of ironic humor, believable effects, and gore. There certainly is a kind of soft-core porn edge to this thing. Not in the flesh department mind you. Everything happens that we expect but not with the veracity and explicitness alluded to. So would the film have been better if the filmmakers would have gone for a hard R? Perhaps something along the lines of “Deep Blue Sea” but with less LL Cool J and more humor? I don’t know. But in all honesty I don’t think amping up the gore or nudity would have saved this thing all that much. Using a criticism like that is a cop-out. It’s like saying well I was promised cake for desert but I got pie instead and now I’m going to piss on your rug. Unfair? Sure. Damnable? Hardly.

“Shark Night 3D” tanked for me for all those reasons mentioned. But what I found to be the film’s weakest element is it’s handling of the Nick-Sara-Dennis triangle and the presentation of class relations. Films like this seem to focus on a particular heterosexual male character’s inability to broach monogamous sexual relationships. It’s not that these men/boys are players who need to “settle down” but that they fixate on one person. This has been a staple in horror flicks for a couple decades surely. But what is odd is that no “choices” are alluded to or suggested at or if they are they are brushed off. The “girl” becomes emblematic of not just sexual fulfillment and maturity but a specific type of sexual lifestyle that privileges singular heterosexual couplings. (I’m not going to go on a rant about how “Shark Night 3D” is a statement on current debates surrounding same-sex marriages or polygamy; I doubt that crossed anyone’s mind). The inclusion of Dennis as a passed sexual partner to Sara who also sees her in this way is an interesting choice that alludes to a more dangerous side of Nick’s admiration for her. However, the film solves this problem by making it a question of class. Nick is presumed to be a more suitable partner for Sara based on their similar economic backgrounds and Dennis is more prone to violence because he is blue-collar. By the final scenes of the film, we are not only unfulfilled by the empty blood-cake promises but we are also told that the lower-class citizens of a town overtaken by rich tourists are perpetrators of sadistic and perverse violence.