Ready or Not (Movie Review) 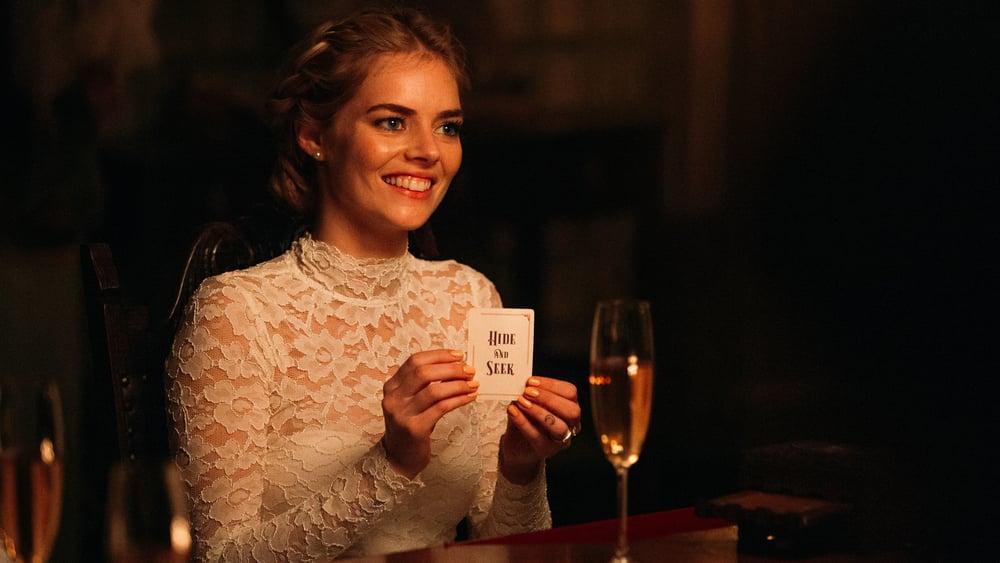 There's a lot of expectations one brings when sitting down to watch Ready or Not. You can expect a ludicrous plot full of silly jokes and over-the-top leaps in logic. What you might not expect is beautifully gothic cinematography, clever twists, and a remarkably witty and subversive script from Guy Busick and Ryan Murphy. Indeed, directors Matt Bettinelli-Olpin and Tyler Gillett have given us one of if not the best breakout horror release of 2019.

Alex (Mark O'Brien) and Grace (the revelatory Samara Weaving) having just married on Alex's family's lavish estate, retreat inside where they are to participate in a long standing Le Domas family tradition. Whenever someone joins the family they gather in the home to play a randomly selected game. The participants place a blank playing card into a box which prints the name of a game on the card face. Grace, being the new initiate, draws the Hide & Seek card and laughs at the absurdity of it all while the family is visibly unhappy by what she's drawn. As it turns out, the La Domas' rules for Hide & Seek are tied to a deal with the devil the family made to acquire their wealth and the new initiate must be ritualistically sacrificed before dawn or the entire family will incur the wrath of the deal’s overseer, Mr. La Bail.

Now, some of the details surrounding the bizarre family tradition is a little foggy, but it's best not dissected in great detail. In fact, Busick and Murphy's script has a lot of fun having the characters toy around with whether or not their fear of satanic blowback is real or complete nonsense. The absurdity of the entire situation is sold flawlessly by numerous characters, but none more so than Weaving, who absolutely slays in this movie from beginning to end. She effortlessly turns in a dime with her emotions and bellows out some of the best screams in the business.

Supporting Weaving in her efforts are the dry comedic talents of Adam Brody and motherly charms of Andie MacDowell. Really, there isn't a weak link in the bunch and everyone has their moment to sell their character's quirks whether they are accidentally killing people left and right, or watching "How to fire a crossbow" YouTube videos and Googling whether or not pacts with the devil are legit. Everyone has a role to play and they do so with a sharpness that elevates every aspect of the film with the exception of some last act hiccups that betray sentiments spoken earlier in the film.

As surprising as Ready or Not truly is, it's not without some predictability. The marketing could potentially be blamed for some of it, but apart from some telegraphed violence the script shines with a macabre sense of humor that flows seamlessly throughout and subverts the film's familiar aspects. The film relentlessly jumps from set piece to set piece serving up wicked laughs. Then in the final act the filmmakers inject a surprising bite of social commentary and family drama that's not particularly deep, but sufficiently gives the scenes leading up to the finale a little more gravitas. Directors Gillett and Bettinelli-Olpin (part of the filmmaking collective, Radio Silence) often linger on the striking, gothic house interior with superb lighting which compliments the structure. The filmmakers know exactly when to up the action tempo even though the film is immensely fun and enjoyable during its quieter moments.

Ready or Not embraces a silly premise with the perfect amount of dark humor and horror. The film further cements Samara Weaving as the genre's most valuable starlet by showcasing her jaw dropping acting prowess. Boasting beautifully gothic set design, lavish cinematography, wonderful performances, and an infectious personality Ready or Not is one of 2019's most exciting releases that audiences desperately need to seek out.

All the Creatures Were Stirring