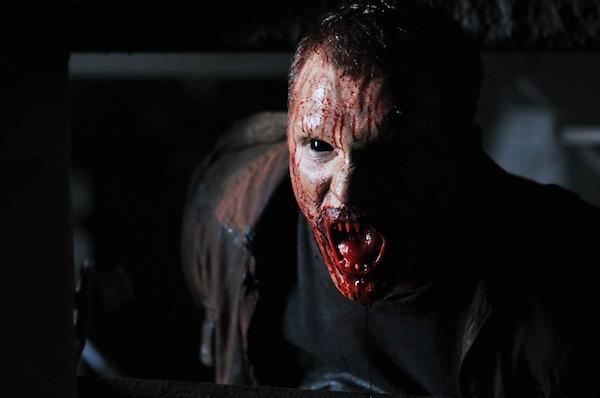 Films based upon original ideas are pretty hard to come across today. Look at any theater marquee on the street and I can guarantee that you’ll see three things; remakes of classic films from decades past (do we really need another “Conan the Barbarian”?), films that shamelessly steal ideas from far superior films (case in point: “The Roommate”) and an endless slew of uninspired sequels (there’s a fourth “Scream” movie now?). Say what you will about the quality of the films shown, but the “After Dark Horrorfest” has been bringing eight films into theaters every January for the past five years. While most of these films have been pretty forgettable, there’s something admirable about the fact that this series has been so dedicated to giving independent, original horror films a theatrical release. This year, “After Dark” has branched out into original features, bringing us two films. The first film in this series, “Prowl” has a fairly interesting and original idea at it’s core. Unfortunately, this idea is buried beneath a sea mediocrity and is ultimately drowned out by poor writing, schizophrenic editing and a truly uninspired twist ending.

At first glance, the plot of “Prowl” sounds pretty generic. The film opens with a flashback. We find our protagonist, a young girl named Suzy, running through the woods being chased by some blood-thirsty vampires. Just as one of these creatures catches up to her and takes Suzy to the ground, she awakes and we find that it’s all a dream. We learn that Suzy is living with her mother after her father has passed away and is working as a butcher at a grocery store while saving money to move to the big city. We’re introduced to her horny teenage friends, including one of my favorite stereotypes, the Pining Nerd and the stage is set. Suzy finally hears back from a landlord at an apartment she has her eyes on and gets the news she’s been waiting to hear, there’s a vacancy. The only catch? She needs to pay the deposit and first and last month’s rent. Today. In cash.

In the first sign of the upcoming questionable writing, Suzy gathers up all of her friends for a quick road-trip to Chicago to pay the rent. Why does she need to gather up all her friends? And why do they pack what we later find out is easily a month’s worth of booze, weed and giant-ass halogen flashlights for an overnight trip? No idea. But they do. Naturally, their van breaks down and a passing trucker offers them a ride, with the catch that they’ll have to ride in the trailer.

This is where we finally get some originality. While in the trailer, things start to get strange. There’s weird noises. The teens are thrown about as the truck swerves side to side. There’s some weird boxes back they that they were explicitly told not to open. And worse yet, their friend riding up front won’t answer his phone to let them know what’s going on. It’s refreshing to see these kind of horrors explored on the screen. While we’re seen films that explore topics like claustrophobia (“The Descent”) and loss of control (any terrible torture porn), these are usually tangental and not the main focus of the film. For this major portion of the film, that’s not the case. And it’s pretty unique.

But then everything goes off track and the film never recovers. Eventually, the truck stops and the cargo door opens, leading into a slaughter house. The teens explore their new surroundings and are quickly ambushed by a gang of vampires. Where this film had the opportunity to pull a “From Dusk till Dawn” on the viewer and throw something completely unexpected at us out of left field, this twist is hinted at strongly throughout the film, so it’s not really much of a surprise (especially if you read the back of the DVD box). And really, huge gangs of vampires out of nowhere should always be a surprise. As a result of those heavy foreshadowing, the middle portions of this film sort of drag as you’re waiting for the vampires to show up. It also kills the tension as you know nothing’s going to happen on the truck as there’s no vampires on board. It really throws everything off.

And things don’t get much better once these vampires show up. For one, the writers really did too much too quickly. Within five minutes of the vampires showing up, half of the cast has already been dispatched, and all but one have been bit. There’s no suspense or drama in watching these characters get picked off one by one which ultimately makes all the time we spent learning who these characters are pointless as it never matters. The editing of these scenes don’t help matters much either. While shaky-cam can be used effectively to illustrate confusion or brutality (think the “Bourne” series), the viewer needs enough visual stimulus in order to understand what’s happening for the effect to work. Here, the colors are so drab and washed out (as it takes place in contemporary horror’s favorite setting, the decayed industrial factory) and the pace is so frenetic that I couldn’t tell what was happening. You’ll hear some shrieks, see some shuffling and then maybe see a head or an arm go flying. Whose was it? You won’t be able to tell until later when you see who’s left standing. It’s just sloppy and distracting.

Of course, this wouldn’t be a contemporary horror film without a stupid twist ending. So naturally, there’s a stupid twist ending. And much like the vampire twist, you’ll see if coming from a mile away. Again, there’s no suspense or surprise to it as a result. And even worse, this twist actually takes away from the tension of scenes that precede it. You’ll find yourself wondering, “hey, why do these vampires keep ripping people out of Suzy’s arms and leaving her alone?”. Well, it’s pretty obvious why. And it’s pretty stupid.

Ultimately, “Prowl” starts off with a pretty interesting idea of putting a group of teenagers trapped in the back of a tractor trailer with no control and no information on what’s going on. Unfortunately, that idea is never fully realized and is surrounded by generic horror tropes, poor film-making and groan-inducing twists. While not being too overly horrible or ever really painful to watch, the end result is a film you’ve seen time and time again. And unfortunately, it wasn’t that great then and it’s not that great now.