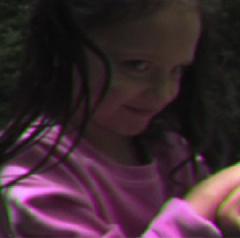 After a legitimate breakout and a strong follow-up, it was safe to say that we're now stuck with "Paranormal Activity," for better or for worse. And while that type of success is usually a recipe for Hollywood studio scrimping and laziness, this series may mark one of the first instances where producers have managed to grow a series both in ambition and quality as it progresses. Be it the addition of directors Henry Joost and Ariel Schulman or the clinical, deft set-up for a transition to prequel, the team behind the "Paranormal Activity" has pulled all the right levers in crafting a new fall horror tradition, just in time for Halloween.

Off the impossibly narrow narrative base established by original director Oren Peli "Paranormal Activity" has managed to build a rather expansive plot arc. The second film laid out the basics: two sisters, Katie and Kristi, have been tormented off-and-on by a demon that haunts there family because of a pact made with the devil before they were born. After the first two films showed us the climaxes of each of their demon experiences, it only made sense that the third would go backward to illustrate what this haunting looked like when the girls were younger.

It's 1988, and Kristi and Katie live with their mother Julie (Lauren Bittner) and her boyfriend Dennis (Christopher Smith). While Lauren's mother, who lives nearby, does not necessarily approve of the relationship, Julie and Dennis seem happy and the girls love their surrogate father. Where the biological fathers of either Julie or the girls have gone is never asked. Dennis works as a wedding videographer and is an all-around camera nut, which explains how and why he starts setting up VHS cameras around the house when some strange noises start spooking the family.

This whole set up was telegraphed in the second film, when a box of VHS tapes mysteriously disappears, but the reality is that even this patina of connective tissue, while effective, is largely unnecessary. Directors Joost and Schulman whip through the prologue as fast as humanly possible so that we can arrive at the present-day of the film, and the real meat-and-potatoes of "Activity" can get underway. That we all know exactly what these meat-and-potatoes are at this point -- that is to say, multitudinous jump-scares -- does not in any way diminish their effectiveness. In fact, "Paranormal Activity 3" can be seen in many ways as an object lesson in learning from and improving on the past successes of a franchise.

The long, still shot punctuated by either A) some noise, B) creepy or barely visible movement, or C) straight-up insanity should be so transparent that it loses some punch, but in reality, the exact opposite is true. In part this may simply be a function of our newly established expectations, but here in "3" the success is also a function of some added set-pieces and some really strong staging. One key addition comes from Dennis's DIY solution to a camera-angle problem. To get more visibility from fewer cameras, Dennis rigs a camera to the rotating platform of a fan, which allows him to record in nearly 180 degrees -- the only hitch is that the camera now slowly pans and pauses before swinging back around. This sets up several high-tension shots where some creepiness is happening just as we pan away or a character moves through the screen before we can pan to catch up. The effect is that the audience is constantly left fearing those things that are just out of sight.

These types of "technical innovations" allow for a fresh viewing experience even in this, the second sequel to a rather formulaic concept. Other improvements come however, from just the sheer injection of production dollars. The acting talent, while not even a problem before, continues to improve here. The same can also be said for the cinematography and editing. While the first film was such a small-budget experiment that we could forgive any filmmaking blemishes, now in the third go-around, it's increasingly nice to see some real polish around the small features that make the film work. This may seem counterintuitive when talking about a first-person horror film, but even in the realm of hand-held horror there are more and less watchable films. If Dennis constantly swung his camera around or had VHS-style static interrupting sequences, audiences would eventually get turned off. Joost and Schulman understand that the real goal is to present just enough amateur flourishes for the audience to buy the premise while deploying all the hallmarks of a finely crafted Hollywood film.

It comes as something of a shock to this reviewer that now two-years into the reign of "Paranormal Activity" the films are actually getting better. While much of the continued success can be attributed to a simple yet effective concept, the team has not rested on its laurels. Instead, they have innovated where they can, and they have injected increasing amounts of plot to the proceedings. From here the challenges are many: how to explain the next round of found footage? where in the timeline to jump? how to build on the exposition without going to far? Normally, all these hurdles would be cause for grave concerns about a franchise's future, but with a third-time's-the-charm victory, it's about time we give the "Paranormal Activity" crew the benefit of the doubt.