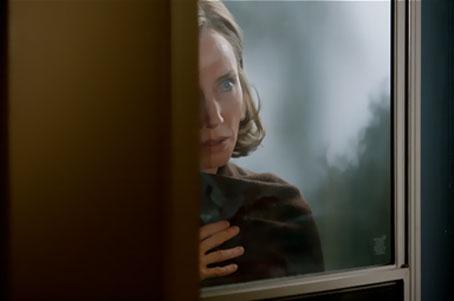 The current trend toward remakes, reboots, and spin-offs has been with mainstream cinema for nigh on a decade. And with this tendency comes a host of voices declaring a creatively bankrupt and psychologically shallow cinema straining to keep up with digital media and the Internet. This weekend alone saw the release of “The Thing” and “Footloose.” But while I have rolled my eyes at more of these types of films than actually enjoyed them I do think it is a dismissive gesture to assume these films are merely quick cash grabs. The history of cinema rife with remakes, adaptations, and borrowings.

And here comes Darren Lynn Bousman’s “Mother’s Day”, a remake of the 1980 Troma release. Following a botched bank robbery, brothers Ike, Addley, and a gunshot wounded Johnny Koffin (Patrick John Flueger, Warren Kole, and Matt O’Leary) seek shelter at their family’s home in a small Nebraska town. Expecting to find their mother Natalie (Rebecca De Mornay) and sister Lydia (Deborah Ann Woll) the three men are surprised to find the house occupied by a couple, Beth and Daniel (Jaime King and Frank Grillo) who are throwing a birthday party with several of their friends. After taking the partygoers hostage, the brothers track down Mother and explain that they had been sending money to the house for several months prior; money that the family will need to escape to Mexico. Certain Daniel is hiding the money, Mother desperately and carefully orchestrates events that inevitably place the fates of the friends in one another’s hands. What transpires is a suspenseful and tense standoff between the Koffins and the group of friends over the course of the night.

To be fair, this is as much a remake of the Kaufman “classic” as “The Goonies” or any other film with a matriarchically lead crime family. The campy, manic tone is dispensed with and replaced with a grimmer, and at times, miserably serious tone. This seems to be the preferred flavor for many of the recent remakes and horror films in general (a few exceptions being Aja’s “Piranha” or Raimi’s “Drag Me to Hell”). We can see how, for example, the realist severity of films like “Paranormal Activity”, “Let Me In” or the “The Walking Dead” series have become the more preferred tonal quality. Indeed Bousman’s close relationship to the “Saw” franchise informs much in the way of tone here—luckily he leaves the ridiculous color tinting at home. And while at times the lack of self-effacing humor can make some films all the more tedious to sit through, it works quite well when bolstered by the convictions of the performers and filmmakers.

Luckily this is the case with “Mother’s Day.” The film does not get bogged down in creating a vicious, uncomfortable atmosphere through heavy-handed cinematography or editing. Bousman has the good instincts to let the moments play out without over-reaching on the technical level. Rather, the tension emerges from the personal relationships between the characters and the stakes set up for both the antagonists and protagonists. Flueger, Kole, O’Leary, and Woll all deliver some great performances, each being able to express the generic qualities of their characters without feeling like they are going stale or lazy. In a finely inspired bit of meta casting, Rebecca De Mornay’s performance strikes that difficult balance between being empathetic and utterly chilling, vicious and comforting. By making the family the narrative focus, the film works to pierce the thin veneer of civility that the group of friends puts on for one another. It is by invading their space that the Koffins are able to bring out secrets and unspoken feelings that the friends and lovers have kept suppressed.

The film is truly given to and more interested in the Koffin family. And while this technique yields some interesting moments, it also completely sidelines a number of the victim characters or makes them into talking heads that provide exposition. One of the friends, George (Shawn Ashmore) is given the thankless task of off-handedly tossing out psychoanalysis about the family and the domineering manipulations of the Mother. When the explicitly gore-filled and violent moments do occur they are (for the most part) handled with some great technical work and are presented as if the violence has real consequences that will reverberate through the future lives of the perpetrators and the victims. But because we are given so little to care about in the way of identification there is nothing to help us get invested in these people.

“Mother’s Day” also exhibits some fairly questionable ideas regarding gender and sexuality. As the film begins to reveal some back-story on the Koffins we learn that the children are not Mother’s biological offspring but were kidnapped at birth. When seeking to provide an explanation for this behavior, the filmmakers make the claim that Mother is an insane, criminal, baby-snatcher because she is infertile, seemingly implying that women require the heterosexual, procreative sexual activity as a means to stave off madness. As Johnny begins to succumb to his wounds, he mentions that he hasn’t ever “had” a woman. Mother, hoping to make her son’s last minutes a bit more comfortable, elects to have one of the female party-goers “help out”. But in order to make the decision the women’s boyfriends are made to fight one another. It’s a scene that is simultaneously hilarious for its melodramatic orchestration and appalling for its assumptions regarding the active, violent men who desire and the women who are made to service, to be looked at and to be shuffled around as possessions.

“Mother’s Day” is certainly effective in its efforts to elicit visceral reactions from the audience and Bousman seems to be more on top of his thematics and actors than in many of his previous films. The film may have some solid technical work, great performances, and a few memorable moments, but it begins to unravel under the weight of its attempts at psychoanalyzing the similarities between the Koffins and the group of friends.

I Still Know What You Did Last Summer