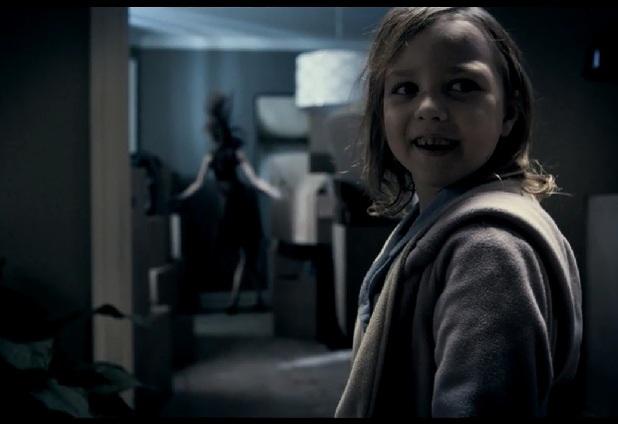 Mama marks the feature film debut of director Andrés Muschietti. Inspired by his

Mama opens during the early moments of the 2008 economic collapse. Lucas, a successful investment banker, is overheard murdering his wife in a blind rage and subsequently abducting his two daughters Victoria and Lilly. After a car accident leaves them stranded the girls are saved by an unexplained entity that resides in a secluded cabin. Five years later the girls’ uncle Jeffrey (Nikolaj Coster-Waldau) can barely finance a meager search effort made up of two yokels and a hound dog. His girlfriend Annabel (Jessica Chastain) is seen mocking the search and cheering for a close call with a pregnancy test, that is when she’s not playing bass in generic rock band. But a chance encounter with the car wreck leads the yokels to the girls who have ostensibly been surviving in the wilderness. Jeffrey and Annabel adopt Victoria and Lilly while also moving into a new home provided by a psychology institute in order for smug Dr. Dreyfuss (Daniel Kash) to continue his studies. But as Annabel and Dr. Dreyfuss spend more time with the girls it becomes apparent that a supposed imaginary friend named “Mama” who helped the girls survive may in fact be more than imaginary.

Mama owes much to a myriad of classic ghost and haunting narratives. Of specific interest to many western versions of these stories is a threat to a family or heterosexual couple. These trials are an apparent stand in for whatever may be the culturally perceived current obstacle to maintaining a hetero-monogamist and traditional family relationships. Indeed Annabel’s arc becomes the most central to the film’s overall project. She needs to learn how to become a mother, care for children, stay at home, and leave her (supposedly narcissistic) career in the band behind. This is further signified by alterations to Annabel’s costuming as she swaps out ripped up t-shirts for outfits of a progressively matron style before landing in a turtleneck. Even the move from their arguably more personal apartment to a generic suburb seems to force the couple back into a world that almost killed Lilly and Victoria. All of this might be a little sly on the filmmakers’ part if these elements of forced socialization were played ironically. But unfortunately the white bread existence is portrayed as the only potential salvation.

Mama’s prologue suggest the film may also be attempting to address the traumatic effects of wide spread economic uncertainty and by extension the uncertainty of traditional institutions. This is particularly relevant in the first shot as the camera pushes in from a wide shot of Lilly and Victoria’s childhood home, Lucas’s car hurriedly parked out front, door ajar while a license plate reading “N1 DAD” is placed prominently in frame. As a radio announcement on the downturn is overheard we here a shot go off. It’s a moment that explicitly illustrates the brokenness of this place. However the theme is never returned to and exists solely as a brief psychological motivation for Lucas to go mad. The fact the girls obliquely witness the murder of their mother is also deliberately ignored in favor of the more effects heavy “Mama”.

The uncertainty of Mama’s themes and plotting begin to explicitly manifest during the film’s penultimate moments. Characters happen to appear exactly where they need to be, technology fails and works accordingly, and evidence is strategically placed. (There is literally a moment when Jeffery walks out in front of Annabel’s car…at night…in the forest.) When the climatic encounter with Mama does occur we are left with a conflicted albeit potentially ballsy moment. The decision to portray what happens is a bit surprising particularly with a film that has a decidedly heavy-handed studio presence (more than one item or service is referred to by a specific, audible brand name). However the moment rings false, attempting to be melancholic, tragic, hopeful, humanist, and nihilist in one fell swoop. The conclusion becomes increasingly uncertain of itself as an aggressively sanguine and slightly maudlin score insists upon the action; provoking us to be hopeful and relieved when in actuality it’s more than a little disturbing.

Most of these criticisms of Mama admittedly ignore the film’s noteworthy moments. The film’s first act has more than a fair share of unsettling, creepy set-pieces. The young actresses who portray Victoria (Megan Charpentier, who is on her way to becoming a contemporary genre vet already) and Lilly (Isabelle Nélisse) give committed performances and Muschietti coaxes some great moments from them. Muschietti also orchestrates some accomplished sequences that provoke both a solid sense of suspense, vertigo, and surrealist unease. A dream sequence and chase around the home are of note. Chastain’s magnetic presence helps eclipse some of her characters rougher, undeveloped edges. The film’s rich atmosphere also remains a palpable presence throughout, complete with a detailed and unnerving sound design and jittery yet elegantly violent performance work by Javier Botet.

Mama is a genre film to the bone. It knows its beats, its traditions, and atmosphere. But what the film unfortunately lacks is a consistently interesting elaboration or a concise, lucid reimaging of genre tropes. While it may have a fair share of tense, surreal, and creepy moments it never quite rises above some confused plotting and awkward characterizations.

As Above, So Below