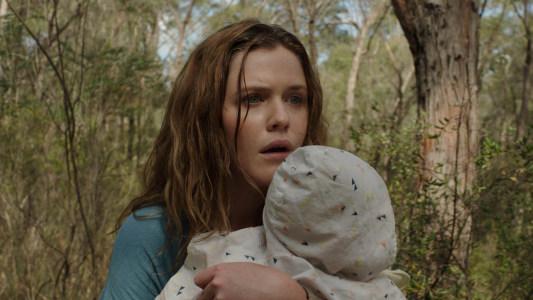 By now any genre film fan knows you’re not safe anywhere. You can also raise a guess that if you decide to go camping, especially in the remote outdoors, you’re probably going to end up dead. Or at least wish you were.

Killing Ground, centers on two families. Sam (Harriett Dyer) and Ian (Ian Meadows) are a young couple from the city looking to lose themselves in the wilderness for the weekend. The Voss family have been camping at the same site the Sam and Ian find themselves occupying. Having gotten turned around on the unfamiliar backroads, Ian takes directions from an unsavory fellow with a rather grumpy dog. Luckily for Sam and Ian the directions are correct and they end up at a beautiful and tucked away beach. When they arrive, they see a camp set up at the other end of the beach but decide that its far enough away that they won’t bother each other during their stay. As Sam and Ian go about enjoying their outing – while the audience sees the happy couple enjoying their break – the timeline flashes back to the Voss’s vacation and their cruel demise as well as the pair that caused it. When the timelines and characters finally overlap – there’s no mistaking the horror that is about to unfold.

Wrought with intense unease, the backdrop of the serene yet remote Outback provides a cavalier setting for the terror that the campers endure. The film skillfully skips around it’s timeline, which helps to increase the foreboding dread even as the audience knows what will happen. The performances are well acted, though there is not much character development beyond their respective archetypes. The plot is obvious and formulaic, but does manage to create enough dread that it holds its own among the likes of The Hills Have Eyes and Eden Lake. The wanton violence and cruelty (which seems to be an Aussie horror trope – ie. Wolf Creek,) even when it isn’t on screen, tends to run a bit heavy throughout the film – and doesn't seem to provide anything new or even an motivation for the antogonists. Granted movitation is not a requirement, the audience is given snippets of their lives during the breaks in the main timeline, so it would seem like there is some attempt to humanize them. Overall, if you're looking for a snippet of nihilistic humanity - check it out.

However, mini spoiler: if you have a soft spot for toddlers or dogs, best bet is to skip this one.

Jigoku (The Sinners of Hell)

Howling II: Your Sister is a Werewolf