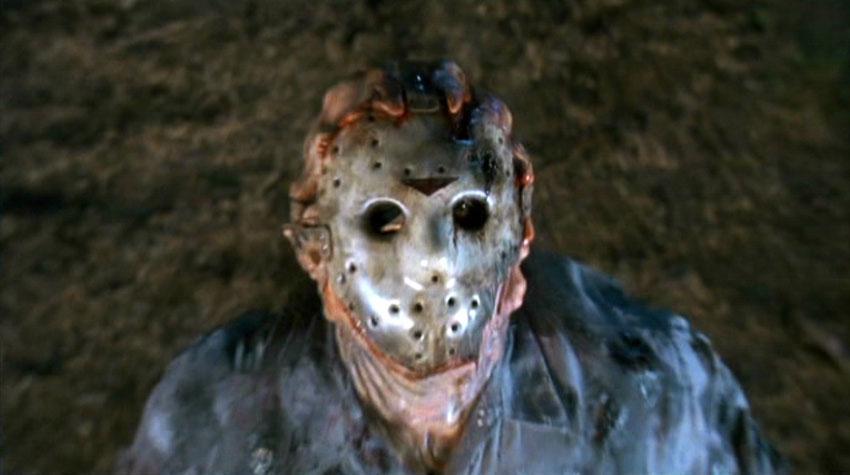 Jumping the Shark
idiom
: used to describe the moment in it’s evolution when a brand, design or creative effort moves beyond the essential qualities that initially defined it’s success; beyond relevance or recovery

Arguably, the “Friday the 13th” series jumped the shark way before the ninth installment, “Jason Goes to Hell”. Before Jason went to hell, he took Manhattan from a cruise ship, killed in the third dimension and feuded with Corey Feldman, all of which could have forever ruined Jason’s reputation for life. As bad and embarrassing as all of these moments were, none of them can ever hold a candle to the embarrassment that is “Jason Goes to Hell: The Final Friday”. If these previous entries to the franchise represent moments where Jason could have jumped the proverbial shark, in “Jason Goes to Hell”, Jason dons his best Evel Knieval costume, gets rocketed out of a cannon on a minibike and pulls a triple backflip over a shark tank containing a sharktopus in the middle of a fireworks display while a zombie Jimi Hendrix shreds the “Star Spangled Banner”. The sheer ridiculousness that is the first thirty minutes of this film is a true sight to behold, yet is ultimately squandered due to the extreme monotony and horrible film-making decisions of the following hour.

“Jason Goes to Hell” starts like many “Friday the 13th” movies, with an attractive female camper inexplicably left alone in the darkness of Camp Crystal Lake. For reasons that become clear later, our camper is alone in a cabin and prepping for a shower in the only way that makes sense, by slowly and seductively stripping in front of an open window. Given his Spider-Man like “naked coed sense”, this quickly attracts the attention of Jason, who appears out of nowhere with a giant machete to chase a half-naked girl through the woods of New Jersey to the score of some super cheesy, midi-keyboard work.

Mid-chase, Jason finds himself in a clearing when a squadron of Navy Seals descend from the trees and open fire on Jason with an arsenal that would make the average North Dakota survivalist green with envy. After being shot up for what seems like five minutes, the Seals hit the deck as a series of bombs literally drop out of the air, blowing Jason to tiny pieces. Yes, they really call in an air-strike on Jason. In the first ten minutes. After baiting him with a naked coed. Your tax dollars at work.

Joke’s on the military though, Jason’s got a backup plan just in case of carpet-bombings. “Jason Goes to Hell” finally answers that age old question, how does Jason keep coming back film after film after film? Well, it turns out that his evil heart never stops beating and can actually possess anyone who happens to look at it for too long. After possessing them, the victim is driven to eat the heart, which then hatches into a little homunculus-like monster which takes over the new host body. Then, this new Jason-zombie simply needs to find a womb belonging to a female Voorhees to vomit the mini-monster into (is that technically incest?) and voila! New Jason.

So by my count, that would mean this has happened seven times prior to the start of this film. Mr. and Mrs. Voorhees really didn’t mess around when it came to making babies. Maybe they were Mormons. I guess that would explain why smoking pot and having sex piss Jason off so much.

So we now have a series of possessed townspeople trying to chase down and possess various surviving members of Jason’s family in order to bring him back. Standing in their way is the leather-clad, cowboy hat wearing bounty hunter named Creighton Duke who happens to have a magical dagger and some teenagers that appear to be in their thirties. Honestly, it took me a solid 40 minutes to figure out that the lead actor was supposed to be a teenager and not a guy having a mid-life crisis and reliving his glory days by wearing a lettermen’s jacket.

Now unfortunately, this is where everything falls apart. As amazingly ridiculous the beginning of this film is, the second two-thirds are excruciatingly dull and filled with horrible decisions. We have a few Jason style kills in the camp, but the problem is we have no Jason. For a film that has his name in the title, the guy’s barely in the film. We have a series of possessed zombies that progressively act less and less like Jason. While the first one has a penchant for slaughtering horny teenagers in the camp, we eventually get a dumpy bald guy who can’t bend his elbows or knees stomping around and trying to choke people. Considering this was supposed to be the “Final Friday” (thankfully, there’s been three more as of right now), wouldn’t it make sense to revel in all of Jason’s campy glory? Something like the follow-up, “Jason X” which shoots the monster off into space to pull off some of the craziest stuff in the series or even “Freddy vs. Jason” does the character of Jason more justice than this supposed send-off. Instead, we have a zombie kidnapping a dumpy, old guy, tying him down with leather restraints and gingerly shaving his mustache off before french kissing a demon into his mouth. It’s real weird.

And it’s really weak. Like every “Friday the 13th” film, “Jason Goes to Hell” has been edited for gore and violence. Unlike the other ones, almost nothing is left intact in the film. I’m not a gorehound or anything like that, but this film is painfully tame. While an uncut version exists, unless you hunt that down on DVD, you won’t be able to see it as the version currently streaming on Netflix that this review is based off of is the cut to pieces edited version. While some added gore may give this film some of that “Friday the 13th” feel that’s missing, the standard theatrical review just feels like an awful, generic ’90’s horror film. With no Jason and no gore, there’s no point to this film.

Given how weak and un-”Friday the 13th” this film is, I’m not shocked that the series has had three more entries since this supposed final chapter. Despite an amazingly insane opening to what could have been an extremely enjoyable, nonsensical film, everything else about “Jason Goes to Hell” is flat and lifeless. It’s a slasher film without the knife-welding maniac. It’s a gory horror film without the gore or horror. It’s the final chapter in the story of an absent character. Fans of the series should do as the producers have and just forget that this film exists.

Movies Like Jason Goes to Hell: The Final Friday