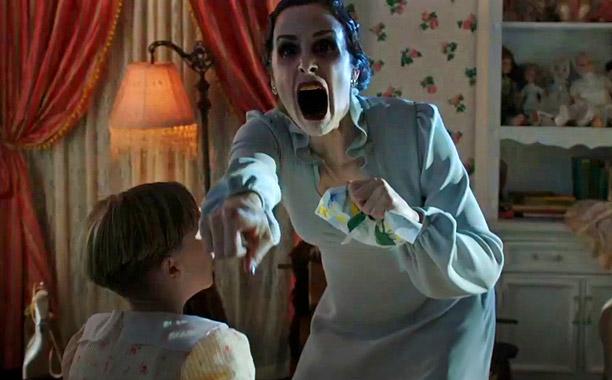 To many modern horror fans James Wan's "Insidious" is consider a new classic for the genre. Taking many elements that belonged to previous films (Poltergeist, The Shining, etc.) and executing them differently to reveal a new flavor helped make "Insidious" feel like a welcome respite from the torture porn heyday of "Saw". Since that original film became a massive financial success there has been an onslaught of similar, albeit effective, haunted house/demon thrillers available for public consumption. Most notably "Sinister", the "Paranormal Activity" franchise, "Dark Skies", "The Possession" and culminating with another James Wan twosome "The Conjuring" and now "Insidious: Chapter 2". Audiences cannot get enough of it. Though as all these films have been successful both critically, relatively, and financially; I believe "Insidious: Chapter 2" marks the tipping point for this genre's renaissance.

Flashing back to Josh Lambert's (Patrick Wilson) young childhood, we see how a young Elise (Lindsay Seim) Lorraine (Jocelin Donahue) and Carl (Hank Harris) confronted and supressed Josh's astral projecting when young. Clues are placed within this trip to the past that not only enlighten the back story of the Lambert family, but will be integral to the plot of this film. Jumping back to the final events of "Insidious", 'The Bride in Black' has possessed Josh's human body and killed Elise (Lin Shaye). With a quick cover story and the inability of the police to match forensics, 'Bride Josh' is able to elude both prosecution and most of his family's suspicion. But Specs (Leigh Whannell) and Tucker (Angus Sampson) come across the video tape of young Josh among Elise's belongings, discover compelling evidence that Josh isn't the real Josh, and contact Carl (Steve Coulter) who's grown estranged from Elise but longs to help solve the mystery of her death. All these roads lead to a fleshed out history of 'The Bride in Black' giving the Lambert family hope to save Josh.

"Insidious: Chapter 2", very much like its predecessor, is rife with strong scares featuring mundane everyday utilities. The always faithful baby monitor returns, as well as an innovative take on the classic cans-connected-by-string communication method. A handful of new ghostly figures also make their presence known and bring a lot of character with their brief time on screen. All the performances are again quite strong; particularly newcomer Carl adds a welcome amount of humanity to the screen. Carl's previous dealings with the dead give him deep perspective on the situation, but also have made him fearful for how powerful they really can be. His interplay with the Lambert family as well as Specs and Tucker make him a strong addition to the cast that I hope carries forward in future installments.

The unfortunate aspect of "Insidious: Chapter 2" and its reveling in the past, is how much of the first film's power has been diluted by this additional information. The character of 'The Bride' is a lurking menace in the first film. We see her in the opening sequence, silhouetted, and waiting to eventually strike. She emerges as a prominent specter once Josh's past is revealed, and finally succeeds in her quest for possessing Josh's body. Thus leaving 'Insidious' with a massive downer ending, but also a phenomenal final turn. All of that mystery and intrigue has been replaced with a convoluted history that reduces The Bride's mystique among horror villain lore. The time travel elements and way 'the further' is manipulated also detract from some of the classic scares in the first film. Revealing the man behind the curtain consistently is "Insidious: Chapter 2"'s greatest carnal sin. Compounded by more, and more frequent, shenanigans from Specs and Tucker the film suffers under the weight of a hundred smaller flaws.

James Wan has very publicly stated that this will be his last feature as a horror film director. While I'm glad we'll be able to see Wan spread his creative wings further, I'm saddened by the loss of someone who represents everything good about horror fandom. Hopefully Wan will enjoy great success through his other ventures and return to horror at some point down the line. Until then he's left us a strong amount of quality films to enjoy; and three influential if not classics in "Saw", "The Conjuring" and "Insidious".

As for the rest of the genre, it's time to turn in a different direction. The world of "Insidious" will only grow with additional sequels written by Leigh Whannel. And Blumhouse has already lined up another one-word-title horror tent-pole ("Incarnate") with Aaron Eckhart as the lead. Horror has been the most cyclical of genres over the years. The 90s were home to slasher send ups and psychological thrillers, the 2000s gave birth to J-Horror and torture porn, and the 2010s will assuredly be known for its Paranormal/Possessing cousins. But hopefully we've reached a point where some young directors can begin to truly innovate and commercially succeed again.