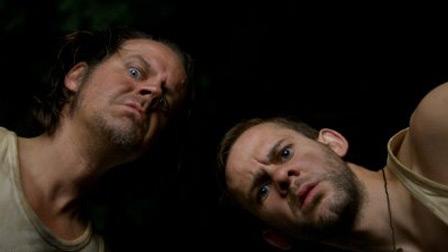 I Sell the Dead (Movie Review)

It’s been noted many times on this site and elsewhere that these days the best horror movies tend to be found on DVD rather than in multiplexes. While Hollywood cranks out remakes and watered-down PG-13 fare, independent and international horror movies have bloomed into a far-reaching underground scene thanks to digital technology. As consumer technology marches forward at an ever faster pace, the DVD players most of us thought were pretty neat 10 years ago already have one foot in the grave. Currently available on IFC On Demand, Glenn McQuaid’s “I Sell the Dead” joins a recent spate of high-quality horror films such as “Midnight Meat Train” and “Splinter” that made their large scale debut in living rooms rather than cinemas. If this trend keeps up, we can declare cinematic horror dead and just sit at home and let the vastly superior movies come to us.

“I Sell the Dead” opens with Larry Fessenden losing his head at the guillotine and then shifts focus onto Fessenden’s partner in crime, Dominic Monaghan, making his confession to campy priest Ron Perlman. Monaghan relates how as a child he became an apprentice to Fessenden in the lucrative grave-robbing trade in a Charles Dickens-by-way-of-Tim Burton version of Victorian Britain. The two dug up the recently deceased and delivered the bodies to local mad scientist Angus Scrimm who eventually becomes as much of a threat to them as the rival grave-robbers trying to muscle into their turf. And there is the small matter that some of the corpses the two dig up aren’t entirely dead.

The film isn’t so much a horror-comedy as it is an enormously charming pitch black comedy with a decidedly Hammer-esque horror setting. Perhaps the closest comparison would be with the malevolent glee found in EC Comics and the Tales from the Crypt franchise they spawned, a comparison McQuaid makes explicit in his frequent use of comic book-style sketches as scene transitions. The film is clearly a labor of love made for and by fans of the genre and it’s a treat just picking out the nods to the past in everything from the casting to the tone to the in-joke gags.

As enjoyable as the film is, it’s hard to ignore that it’s not so much a story as a collection of stories nested within stories. There are points of the film in which a careful viewer might realize they are watching a guy telling a story about a story someone told him about a story he heard this one time. The “three times removed” nature of some of the stories works in that it brings to mind how urban legends and tall tales usually come from exaggerations and flat out lies, although there’s never any doubt as to the existence of zombies and vampires in this twisted take on the past. The film may have no real overarching plot at all, but I’ve got absolutely no problem with a shambling episodic structure when it’s this much fun.

A lot of the fun comes from accomplished genre vets cutting loose and hamming it up. “I Sell the Dead” is one of those infectious films where it looks like the cast and crew must have had a ball making the film. Ron Perlman chews the scenery in all the right ways with an absurd Irish accent added to his usual gruff delivery. With his naturally hobo-ish looks, Larry Fessenden was born to play a Victorian grave-robber and at 83 years old, Angus Scrimm is still every bit as scary as he was in 1979. There’s a reason the guy’s a bona fide horror icon without the help of a mask, machete or make-up. On the subject of make-up: no one would mistake “I Sell the Dead” for a high budget film, but the special effects are perfectly adequate and more importantly, perfectly appropriate. Some of the zombies do look like guys with caked-on greasepaint, but in this kind of movie, that’s exactly what zombies are supposed to look like. There’s no need for strict realism in an over-the-top grindhouse fairytale and expensive prosthetics or CGI would only upset the carefully crafted tone of the movie.

There’s a lot to recommend “I Sell the Dead” on. It’s completely fresh and original, it delights in being ghoulishly creepy as well as laugh-out-loud funny, it’s well-made with some serious talent behind it and, more than anything, it’s one of the most purely fun genre pics of recent years. I love the cinema as much as anybody but in a time when horror fans and filmmakers get insulted at the box office it’s nice to have treats like this piped straight into our homes. If you have IFC on Demand, check out “I Sell the Dead.” You’ll probably dig it.

Born and raised in the back of a video store, Shelton went beyond the hills and crossed the seven seas as BGH's foreign correspondent before settling into a tenure hosting Sophisticult Cinema. He enjoys the finer things in life, including but not limited to breakfast tacos, vintage paperbacks and retired racing greyhounds.