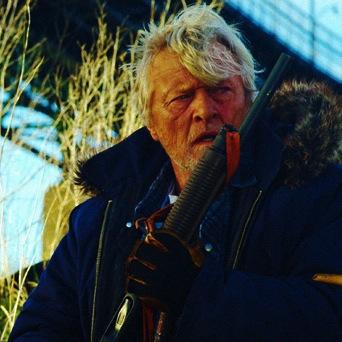 Hobo With a Shotgun (Movie Review)

Sitting down to watch something called "Hobo With a Shotgun," there can be little doubt about how things will unfold. Jason Eisner, director of a film that bears such a name, knows this as well. Much to his credit, Eisner seems to realize that he's as unlikely a feature filmmaker as has ever been, and so he plays his heart out to ensure that "Hobo" delivers on the promise such a concept contains.

When a solitary hobo rides the rails into a new town he doesn't expect a red carpet welcome, but he also doesn't expect to see a criminal syndicate meting out its own brand of justice -- that is to say beheading a family member with a barb-wire noose. Having learned his lesson with some blood spray, the hobo goes about his business, collecting cans and dreaming of one day owning a lawn-mower from a pawn shop window. He keeps his head on a swivel though, and the hobo quickly realizes that the violent criminal family has the entire town under its thumb. He goes to the police for help, but they too have been bought. Faced with a decision, the hobo realizes there's only one thing he can do: get himself a shotgun.

Eisner wastes little time in getting the shotgun into his hobo's hands, and once he is teamed up with a spunky prostitute, the films becomes a sort of demented "Walking Tall." Though it hails from The True North and won acclaim in front of "Grindhouse," "Hobo" shares a great deal in common with New Jersey's iconic Troma Productions. "Hobo's" crime-ridden town smacks of Tromaville, and Eisner's framing, pacing and editing indicate that he's more than passingly familiar with Lloyd Kaufman's aesthetic. "Hobo" also possess the type of raw, kinetic energy and non-sequitor-like narrative that ties it more to Troma than to some of the other neo-grindhouse releases of late, which certainly trend toward the exploitative, but still play by most Hollywood conventions.

"Hobo" manages to soar however, where many a Troma film has wallowed, and there is one key reason. The straw that stirs this drink -- and of this there can be absolutely no doubt -- is Rutger Hauer. The dutchman who made a name for himself stateside in films like "Blade Runner" and "The Hitcher" plays the titular Hobo here to such a degree of perfection there's little chance the film would have survived without him. Words are a poor substitute for the magic that Hauer brings to the role: pure insanity that he somehow manages to play in an understated way. He may also have just huffed a lot of paint. Whatever it took -- and lord let us hope he wasn't using method acting -- it was worth it. Hauer is so balls-out crazy throughout that one rarely has a chance to note many of the other performances. They felt unremarkable, but could just have been overshadowed by genius at work.

"Hobo" eventually reaches a crossroads. Hauer has his shotgun and has shotgunned virtually everything in his path. Act two has wound down and its time to foster a massive showdown. It's here that Eisner really separates his film from the pack of wanna-be B-movie revivalists. Instead of play the genre conventions straight and send his hobo riding into a gore-soaked sunset, Eisner brings in a whole new element of craziness. Mysterious "Road Warrior"-esque vigilantes swoop in to up the difficulty level for the hobo. But of course our hero doesn't go down without a blaze of shotgun fire.

"Hobo," made by a rookie from an absurd trailer concept, is far from perfect. But it's a film whose flaws only serve to make it that much more endearing. It likely goes without saying at this point that not everyone will get "Hobo With a Shotgun," but for those that do, there's a special cinematic experience at hand. Plus, audiences are likely to learn a thing or two about bears.