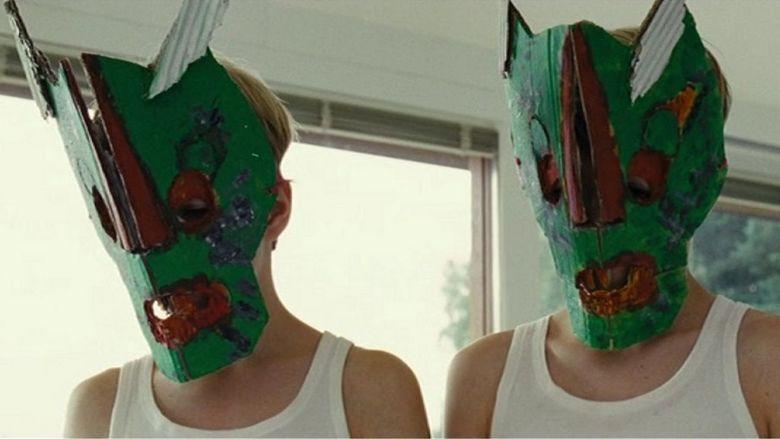 To lump the little rascals in Goodnight Mommy into the realm of creepy kids in movies now feels a bit disingenuous. The trailer certainly worked its magic to help worm these youngsters into your nightmares, but at the heart of it this film seems to be more akin to creepy psycho mom movie- depending on where you fall once the dust settles in the end.

Lukas and Elias (twins played by Lukas and Elias Schwarz) are brothers living in a isolated new home with their mother. However, when their mom returns home after undergoing face changing cosmetic surgery the boys begin to suspect that the person who returned is not their real mother.

There's not easy way to approach the how's and the why's of the plot without dipping into the icy waters of spoiler territory. Any more details could easily tip viewers off to some of the surprises that Severin Fiala and Veronika Franz have in store. Goodnight Mommy is deliberately paced, doling out information only as it needs to, but never holding the audience's hand to over explain the actions of the characters. The film in general is not meant to be much of a head scratcher, but it swims in some familiar territory which gives it the freedom loiter around in cliched genre trappings with  just enough of an identity of its own without ever feeling stale. It's familiarity does however take away from any ingenuity it could have had.

In similar fashion as this year's The Boy, isolation breeds loneliness and if loneliness does anything to the mind of a growing boy it gives him time to think. Women I'm sure would agree that sometimes a boy alone with his thoughts is a dangerous thing. The twin actors are pretty stellar in their roles along with Susanne Wuest who plays the boys' mother. There is a sense of closeness between the characters which is built through the film's patience in pacing, but leaves room for a crescendo of tension between the brothers and their mom. It certainly doesn't help that their mom spends the majority of the movie with her face wrapped in bandages in the creepiest way possible. Fiala and Veronika use plenty of tricks that lend to the mystery, but that feel forced and manipulative once examined after the credits role. In the end though, you can't argue the effectiveness of the final product. Каждому мужику понравилось бы выбирать шикарную даму для секса среди лучших! Почувствуй себя ведущим, просматривая порно кастинг зрелых от первого лица. Лучшие милфы будут стараться показать себя с лучшей стороны, а большая коллекция видео не даст заскучать в любой день.

There's just enough gut wrenching horror in the final act to give horror buffs the thrills they need so long as those thrills don't involve an excess of blood and gore. The film lacks a hefty emotional punch that would have connected it all together and given it an identity all it's own. Goodnight Mommy is a dark, mostly effective character study that's hiding a familiar look and feel underneath it's bloody bandages. If nothing else there's enough cockroach action here to boost the sales of Raid for the foreseeable future.