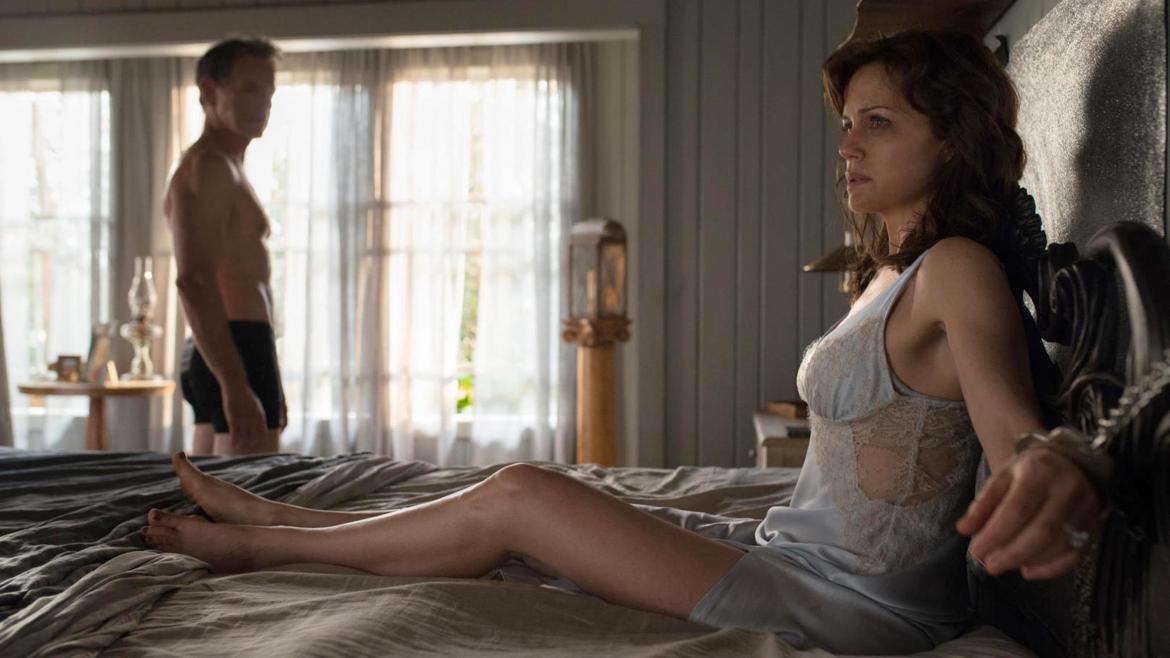 Imagine if Viagra put Stephen King in charge of one of their ad campaigns and you have a starting position for Gerald’s Game. A husband, Gerald (a physically jacked and emotionally nuanced Bruce Greenwood), and wife, Jessie (Carla Gugino in a powerhouse performance), head to a secluded cabin to find the spark their relationship has been missing. Instead of a pair of bathtubs perched on a hill, Gerald decides the right accessories – besides his trusty blue pills – are police issue handcuffs. Initially, Jessie goes along with Gerald’s plan, however, as his darker side presents itself, she bails. At least as much as one can when handcuffed to a bed. Before Gerald can free her, he suffers a massive heart attack, leaving Jessie trapped, miles from help, but far from alone.

The thing that makes King's source text Gerald’s Game one of his best works is how disarming it is. The narrative starts as a dark character study of Jessie, feeding readers large sections of backstory by way of her rapidly deteriorating mental state. King has a twist chambered and when he unleashes it, the book becomes a tense battle for survival. Director Mike Flanagan – who also co-wrote with frequent collaborator Jeff Howard – captures the essence of the book perfectly and even ups the tension of the pre-twist novel. Here, they leverage Gugino and Greenwood as manifestations of Jessie’s psyche and, hidden behind this strange trio’s terse, sometimes humorous bickering, is her internal struggle to make sense of her situation and what she must do to stay alive.

Gugino is particularly impressive, however, she’s absent from what is perhaps the film’s most stressful sequence. In it, a key piece of Jessie’s history is revealed as we see her younger self (Chiara Aurelia) manipulated by her abusive father (Henry Thomas) with repulsive precision. Thomas’ admirably vile performance is matched in its impact by Aurelia, who proves a worthy acting foil even as she succumbs to his cruel tactics. Admittedly, moments like these can serve as gratuitous manipulations by filmmakers in their own right, meant to elicit certain reactions from viewers, yet here they are deeply intertwined with the narrative.

The only failing of Gerald’s Game is the closing moments of the third act. Flanagan and Howard use a massive info-dump to bring Jessie’s story to a slightly unsatisfying conclusion. While true to the source material, their ending is no more graceful because of it – certainly not considering King’s own occasional struggles with sticking the landing.

Gerald’s Game may not have the name recognition or easy marketability of some of the other properties finding new life during the modern Stephen King renaissance. Yet, thanks to the strong narrative, near-ceaseless suspense, and a talented cast at the top of their games, it ranks among the most successful adaptations of his work.

King of the Hill