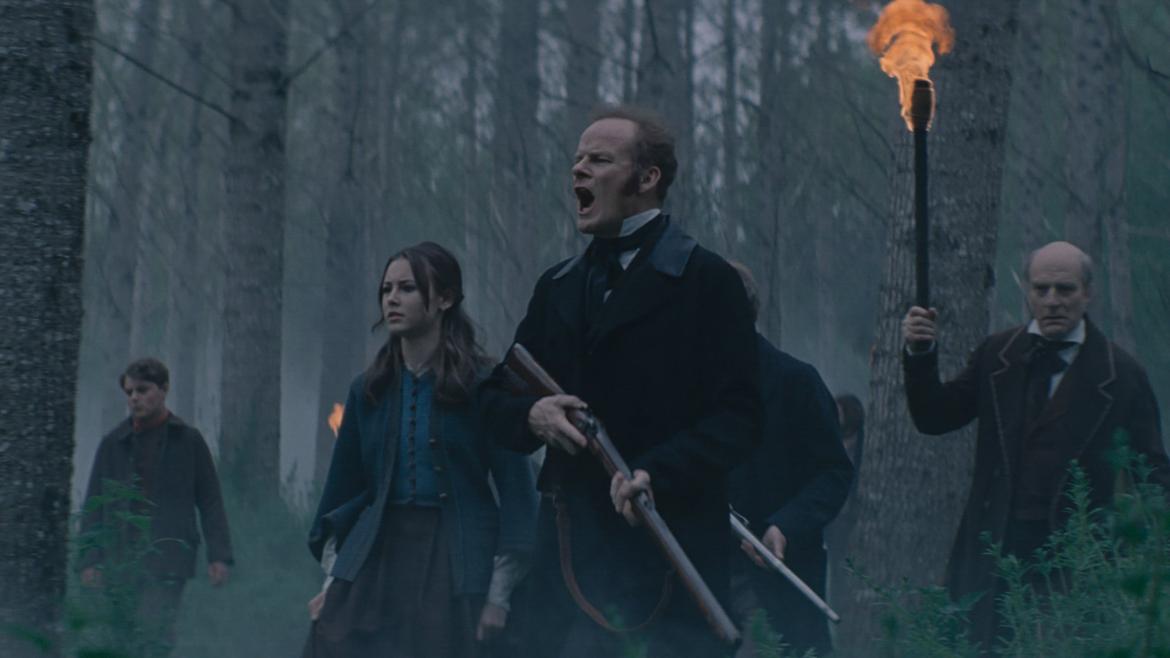 One of the founding metaphors of Western werewolf lore centers on a presumed duality of humans--usually men--and the binary states of good and evil. By extension, it’s the cultural association of wolves with feral power and savagery that’s long framed these stories cinematically. Eight for Silver reimagines and repurposes the werewolf mythology as that of an agent of ferocious vengeance. In the hands of filmmaker Sean Ellis, that vengeance comes with a persistent, cruel and unflinchingly violent animosity.

Eight for Silver takes place in the 1800’s where, in the midst of a land dispute, Seamus (Alistair Petrie) leads the ruthless slaughter of a community of Romani, but not before one of them curses the land and Seamus’ people. Soon after, the people of the village experience the same nightmare, leading some of the local children to the field where the massacre took place. Once there, one of the children finds a set of silver teeth said to have been melted and formed from the coins paid to Judas when he betrayed Jesus. The boy puts the teeth in his mouth and immediately becomes feral, biting Seamus’ son Edward (Max MacIntosh). That night Edward falls ill and disappears. Meanwhile the boy who bit Edward is viciously attacked and killed. Enter John (Boyd Holbrook), a pathologist summoned initially to assess Edward’s wounds who also has a history with the Romani. John joins the hunt to hopefully bring Edward back safely and snuff out the growing supernatural threat.

The genesis of the werewolf curse in Eight for Silver is fascinating, immense breath of fresh air to the genre. The silver teeth as a cursed object meant to summon “the dark one” is ripe with genre implications and the history hinted at within it is inspired. How the curse spreads and manifests is also a unique spin on the transformation and presentation of the creature. The pivot in the werewolf design eventually lends to an absolutely horrific “autopsy” sequence that is Lovecraftian while also calling to mind John Carpenter’s The Thing. Ellis does not skimp on the violence, staging attacks which are incredibly brutal and gory, but sometimes undercut by occasionally shoddy CGI. Still, the brutality ripples throughout the film including an early scene involving a makeshift scarecrow, savagely assembled. The nightmarish landmark haunts the townsfolk nightly and compliments Ellis’ supernatural vision.

While Eight for Silver brings inventiveness to the genre’s origins, it stumbles in attempting to find any depth in its narrative. The film begins with an introduction to characters that we then follow 35 years earlier, telling us who we can expect to make it out unscathed. This strategy sucks all the potential tension out of the film’s main narrative as one of the very characters at the center of the mystery is shown to have survived the events. However, it becomes evident that Ellis’s film may be less about delivering shocking twists or staying one step ahead of the audience and more about the visceral experience of how those characters made it through the ordeal. And though the quieter moments prove to be a tad dull as you anxiously tap your fingers in anticipation of the next attack, the characters are fleshed out just enough and the actors give commendable performances.

Eight for Silver is often a stunningly gothic rendering of a period setting that boasts a wonderful atmospheric aesthetic. Ellis’s narrative tends to dip into dull territory at times, but counterbalances it’s weaknesses with intensity and the horrific nature of its monsters—both human and supernatural. Eight for Silver is a worthy entry into the werewolf pantheon.

Screened as part of the 2021 Sundance Film Festival.