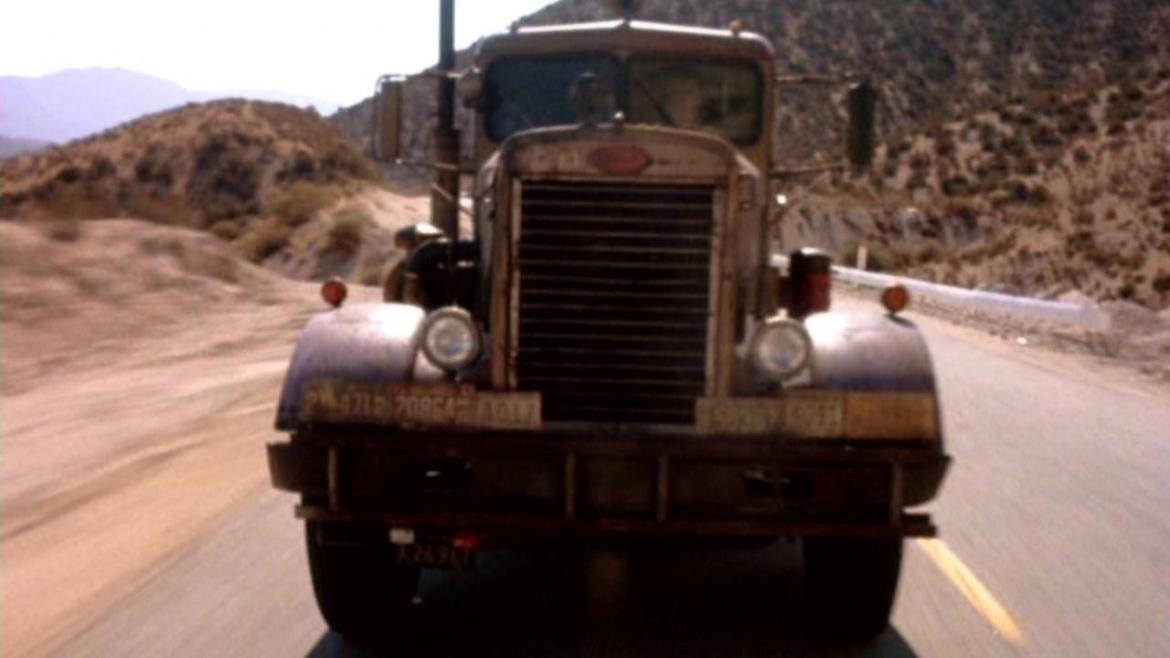 By Chris Vander Kaay and Kathleen Fernandez-Vander Kaay on October 03rd, 2014
In 1971, director Steven Spielberg created the television movie “Duel”, which was both the perfect template for the road thriller film as well as a test run for the relentless stalking monster story elements that he would codify in “Jaws”.  With a script from author Richard Matheson, based on his short story of the same name, Spielberg manages with this extremely low-budget project to capture the kind of tension and immediacy that career filmmakers spend decades and millions of dollars trying to envision.
Dennis Weaver, a television actor known primarily for western series like “Gunsmoke” and “McCloud,” perfectly embodies the weak-willed David Mann, walked on by his employers and his wife (who is seen briefly at the beginning and heard over the phone), and his fear-fueled transition from timid businessman to primal warrior in the closing moments of the film is an effective and believable arc.  His performance is of special note considering that he spends much of the running time of the movie as the only actor on-screen.
The rhythm of the film is deliberate in its opening half hour, allowing us to understand David’s uneventful life (the most exciting thing he does is listen to talk radio) before throwing in a crazed truck as his nemesis.  And it is a truck as the villain, rather than the trucker himself; we see boots from underneath a car at one point, but Spielberg intentionally obscures the driver of the vehicle through specific camera angles and filthy windows so that the truck itself becomes a living creature, groaning and screeching across the road like some hellish mechanical dinosaur.
The central theme of the film, of modern man being stripped down to primitive survival instincts to survive attack, is perfectly embodied by the monstrous villain as well as the rather obvious reference in David Mann’s name (history can be thankful that the network didn’t decide to call this film “The Survival of Mann”).  The film was such a creative success that it was released as a theatrical film overseas, and it is easy to see why.
While the film is certainly a time capsule of clothing vehicle styles, the film itself doesn’t feel particularly dated, and the performance and direction should still be studied today by low-budget filmmakers looking to create small films that make a big impact.  This film is absolutely worth the time for any suspense, thriller, or horror fan.