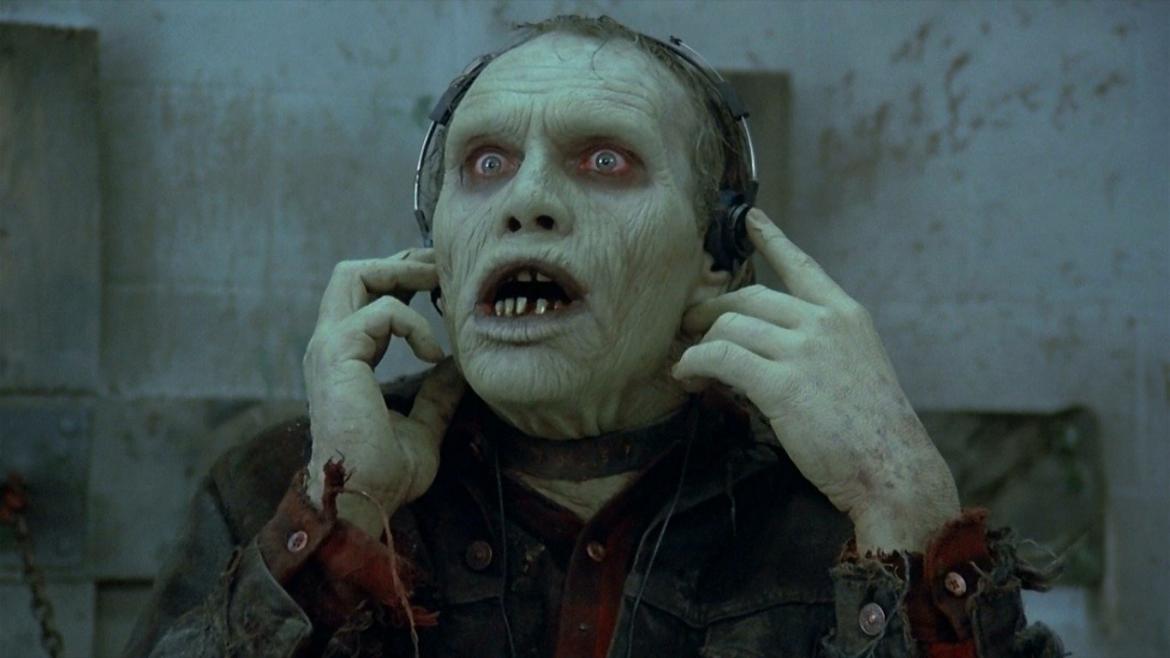 Excluding the much more recent example of The Walking Dead and its spinoff, since the advent of the zombie genre, it is unusual for us to get to see how the survivors of a zombie outbreak deal with the progression of the apocalypse. We are typically dropped, often just as things are going to hell, in the middle of the outbreak and get to see just a snapshot of how people might react. Father of all zombie films as we know them, George Romero, sets a very different precedent with his Dead franchise.

Each successive installment might center around a new group of humans in a different locale, but they seem to each build upon where the last one left off in terms of the collapse of society. This franchise seems to suggest, based on its format, that the particular humans matter less than humanity as a whole, which really strengthens Romero’s overarching theme that there may be less separating the “us” from the hordes of undead than the survivors might hope.

In Day of the Dead, we are introduced to a group of scientists and ex-military men holed up in a subterranean bunker in Florida. The two groups appear to be diametrically opposed; the researchers want to learn about the zombies, maybe find a way to domesticate them, while the soldiers are happiest when they’re berating and mowing down the walking dead.

Carrying on where Dawn of the Dead left off, Romero seems particularly interested here to examine what differentiates the living from their reanimated counterparts, and whether humanity as it remains is really all that humane. In an early scene where the soldiers cull wandering zombies for research purposes they scream horrible vitriol at them, while simultaneously hurling racial slurs at one of their own men. These men are portrayed throughout the movie as brutish and harsh, in stark contrast to Bub. Bub is a zombie that one of the researchers has been able to “train.” He doesn’t immediately growl and lunge when presented with humans, and is even able to learn how to operate a stereo. The scientist suggests that Bub is proof that there is still humanity and perhaps even the echoes of a past life in these creatures.

To put a fine point on it, Romero writes a scene in which the head researcher, who the soldiers mockingly refer to as “Frankenstein,” tries to defend his work with Bub to Captain Rhodes, he argues the importance of civility. He beseeches, “Civil behavior is what distinguishes us from the lower forms. It's what enables us to communicate. To go about things in an orderly fashion without attacking each other like beasts in the wild. Civility must be rewarded, Captain. If it isn't rewarded, then there's no use for it.” If Bub is able to act in a more civilized manner than his captors, then who are the real “humans” here?

With advanced technology and an increased budget, this film also benefits from better practical effects than its predecessors, which means we get some truly spectacular death scenes. The zombie makeup, likewise, comes off as much more horrifying than it has been up to this point. It may not be the strongest in the original trilogy, but all in all, Day of the Dead is able to work forward and ask some new and interesting questions while upping the creep factor.