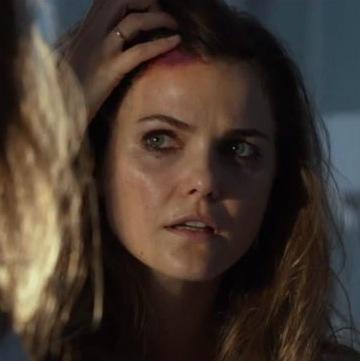 What "Paranormal Activity" has done for haunted houses is what "Dark Skies" could do for close encounters of the alien kind. At least that's the hope of filmmaker Scott Stewart and producer Jason Blum, the latter of whom produced "Activity" as well as "Insidious".

Watching "Dark Skies," this previous genre success could not be closer at hand. Once again a suburban family is under siege by unexplained forces. By all appearances, the family couldn't be more normal, but just beyond the facade of happiness lie cracks of unrest. The father, Daniel (Josh Hamilton), has been out of work for some time, and has struggled to catch on with an architecture firm. Mother Lacy (Keri Russell) supports the family as best she can as a realtor, but hasn't had many wins.

Into this situation drops some expected visitors. After some initial weird pranks, the family begins to get worried when their younger son starts talking about strange dreams and unexplained disturbances. As in the "Paranormal Activity" films, the family goes through the motions of setting up alarm systems -- which obviously go off like crazy -- and then a full-on camera system.

None of this comes to any use though, and the family's situation continues to spiral downward. Bonds of trust begin to fray, both within the family and as part of the greater community as desperation bleeds into the picture. And this is where the film has it's "Tangina" moment: here in the form of alien expert Edwin Pollard (J. K. Simmons). With secrets revealed the family reunites to face their final showdown with the household's invaders.

"Dark Skies" is nothing if not "of this moment" in horror. It latches on to nearly every popular trend -- familial unrest, first-person cameras, judicious jump-scares -- and blends them into a well-structured, palatable film. Taken in the context of today's horror landscape, it would be fair to criticize "Dark Skies" as a touch too formulaic, as playing it a bit safe.

The flip-side to this criticism, and the reason that "Dark Skies" succeeds more than it fails, is that when compared to its PG-13, haunted house brethren, this new film wins with quality. This starts with the quality of acting coming from the two leads Keri Russell and Josh Hamilton. Russell is by far the more recognizable, but she has transitioned from her "Felicity" days to a plucky mom (as currently also seen in FX's "The Americans") quite well. Both her role as well as Hamilton's contain more nuance than audiences may expect to see in a film like this, which again speaks to a general level of quality in the script. Similarly, Scott Stewart, previously known for such films as "Priest" and "Legion", acquits himself admirably by not blowing any moment too far out of the water, and instead letting the situations unfold in a more realistic manner.

Of course, when it comes down to it, "Dark Skies" will probably remembered -- if at all -- as "the alien movie." That is not without good reason. As much as "Skies" unfolds like the haunted house films before it, at the end there is no ghost, only "the grays," as J. K. Simmons alien-whisperer character informs the family they are called. And as with any horror movie, this reveal likely acts as a breaking point: either viewers will be on board and excited to go forward with this definition in hand, or they'll chuckle and the rest of the film will be a loss. Stewart, who also wrote the script for "Skies", gives his film about as good a chance as any on this subject matter is going to have. The reveal is gradual and by the time it comes full-out, seems like a natural extension of the madness that has led to that point.

While it is unlikely to usher in a host of alien abduction followers, "Dark Skies" does stand as a valiant effort at taking a relatively marginally topic in horror and bringing it closer to the mainstream. Stewart deservers credit -- along with producer Jason Blum -- for making a film, that may not go down as a classic, but certainly can hold its own against much of what horror filmmakers have brought to the table of late. One thing "Skies" does share with "Paranormal Activity" is the fact that it ends with coda that points to future episodes to come, and if that's the case, at least "Activity's" precedent shows that we should get two more quality films out of the experience before things go off the rails.

Scary Stories to Tell in the Dark