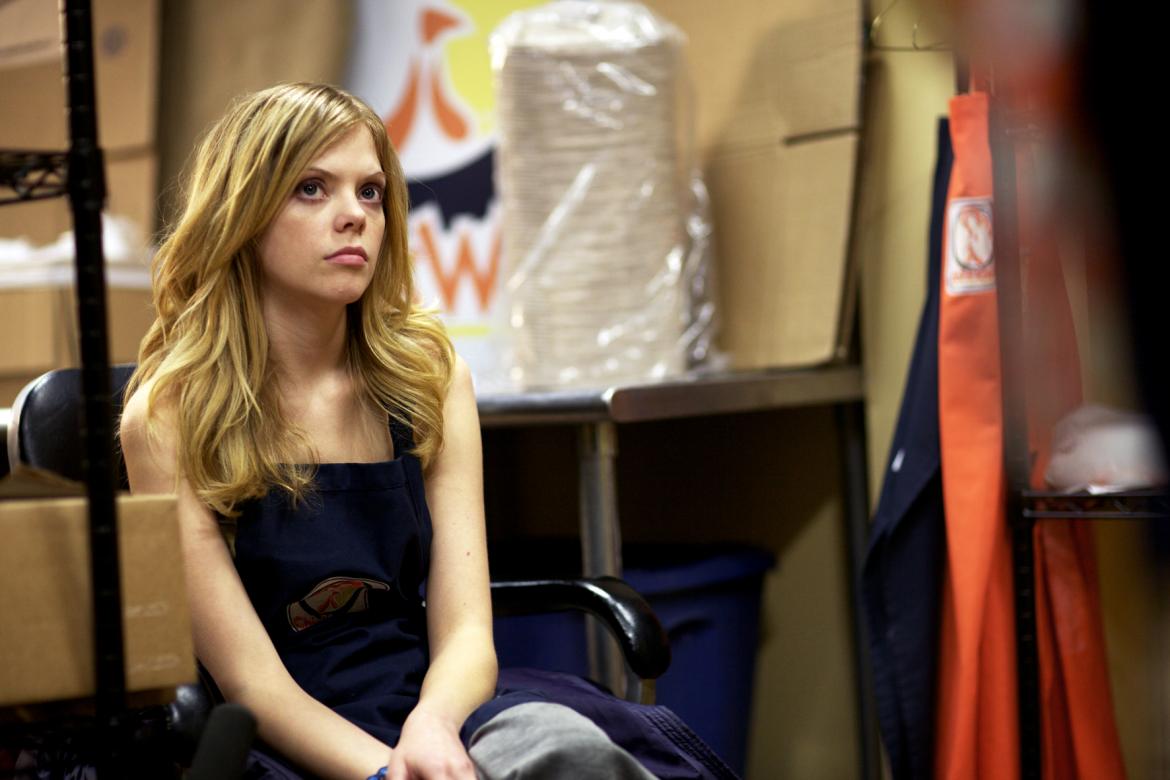 Craig Zobel’s “Compliance” attempts to expressly address the objectification and subjugation of women. The film is so persuasive in this address—or maybe ignominious regarding its presumed message—that it has provoked some derisive, intense debate. Since Laura Mulvey’s seminal paper “Visual Pleasure in Narrative Film” many critics began regarding representations of women in the cinema (or for that matter any visual media) in more purposeful ways; examining not only the relationship of camera to body but also the moments that frame these representations. The concern here is not so much how much of a person we can show to appease the MPAA but what exactly it means to view women’s bodies through the cinema.

The conversation is an old one but as of late the dust seems to be shaken off in North American, narrative cinema. Along with Zobel’s film we could also think of “Killer Joe”, “Beyond the Black Rainbow”, and “V/H/S” as other examples of contemporary films that reinvigorate this conversation—some more purposefully and subtly than others. It is particularly interesting that these films are either fully sci-fi/horror related or flirt at the edges of these genres.

As “Compliance” opens we see the text “Based on true events”, a generic and aesthetic strategy that may as well be the modus operandi for horror films over the last decade. And indeed it is safe to say that “Compliance” is horrific in its affects on the audience as well as its overarching implications. However, despite the film’s greater accomplishments it falls victim to some rather questionable representations of class relations that get overlooked in the consideration of its more salacious material. Sandra (Ann Dowd) is a middle-aged manager of a regional fast food restaurant. She is competent enough though perhaps a little too inclined to want to be liked. She has a shulby boyfriend, Van (Bill Camp), who appears genuine if not slightly made to look a yokel. Among Sandra’s employees are co-manager Marti (Ashlie Atkinson) and a young woman named Becky (Dreama Walker). Becky is a chatty, flippant, yet likeable wisp of a girl who is much more concerned with her new boyfriend’s abs and the world outside of work than she is following Sandra’s lead. But when a phone call claiming to come from the police instructs Sandra to detain Becky following the supposed theft of a customer, Becky, Sandra, and more are forced to confront their own relationship to a social hierarchy between each other and the forces on the other end of the line.

“Compliance” is an accomplished film in its attempts at affecting certain emotions in its audience. The audience I saw the film with including myself squirmed and gasped more than a few times throughout the screening. The effectiveness of the film’s style, performances, and its rhythms are rather exemplary, juggling moments of levity, with dark comedy, disturbing actions and inactions. This is all tied up in the representation of a grim, uncanny narrative about the influence of bureaucracy and a reexamination of Michel Foucault’s writings in a contemporary context. It is easy to see why the film has been received positively in critical circles. The visual and aural aesthetic of the film plays into critical tastes with unelaborated flourishes that favor quotidian actions structured to appear unadulterated. “Compliance” is a rich cornucopia of academic ideas ensconced in the “gritty realism” of fast food restaurants.

And this is also the film’s greatest weakness. “Compliance” falters not in its handling of Becky’s ordeal. Indeed, Dowd, Walker, and the other supporting cast turn in some frustratingly befuddled and honest work. But the film begins to smack of classists snobbery as the situation turns increasingly grim. A nagging smugness permeates the film, making the material into an angst-ridden rant against conformity rather than a potentially politically powerful film that provokes us to reconsider our relationship to the screen as well as systems we belong to. We observe as more and more people are convinced to search and humiliate Becky under the guise of law. Then at strategically placed interludes we watch as greasy fries are filmed in close-ups, cups are refilled with soda, and figuratively faceless patrons at the fast food chain gab away and shovel in the food. Nearly every one of the more honest moments in the film is undercut with this insinuation that the middle and lower class citizens who frequent and work in these places are too vacant to see what is going on around them. Zobel does attempt to give Sandra motivations for her inaction but by the film’s close we watch as she mindlessly panders to a reporter by forcing chit-chat akin to what the caller had been using throughout the film. Instead of expanding the film’s dialogue it becomes about a world full of dullards content on scooping fries or consuming them.

Undoubtedly how Becky’s humiliation and torture are framed for the audience is of great importance to any discussion of “Compliance”. However, focusing solely on this issue also ignores this unsettling class based subtext of the film. The horror is not only the impersonal, imperceptibility of the “system” but it is also the individual’s willingness to go along with it. The trouble with the film is that it dwells so completely on its setting and type of work its characters do that it verges into some classist indignation that sees these people not only as just gullible but flatly stupid and congenitally dangerous. Admittedly the film does insert a couple of characters who resist this tendency but their efforts go no further than saying “no”, giving us more running time of sickly framed food consumption montages and vague inaction.

There is a moment mid-way through “Compliance” in which Sandra is instructed to place some “evidence” in her car so the authorities can properly search it. We watch in an unbroken shot as Sandra walks to her car and returns to the restaurant while picking up some litter along the way. All the while an urgent and melancholic cello score plays. It’s a moment that is precisely indicative of Zobel’s bravura as a filmmaker but also an inconsideration of the material. It’s an intensely effective and affecting moment in which Sandra’s simultaneous decisiveness and inability to think outside of the system are played out by her continued duty as (in this case) a literal garbage collector. By the time Becky responds to interrogations into the incident with “I just knew it was going to happen” the film has turned into something else entirely. Where “Compliance” could have attained more profound levels it ends up feeling like a constricted exploitation film for the art-house crowd.

From Dusk Till Dawn