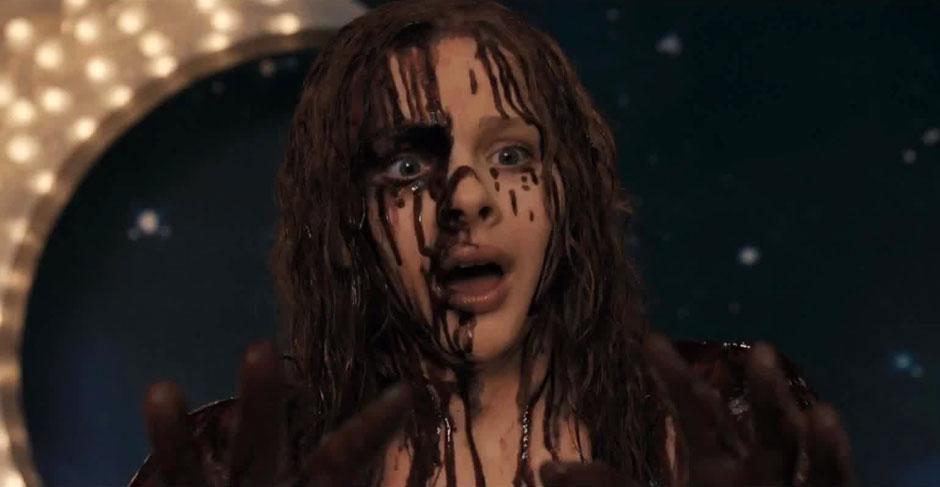 Much of Stephen King's literary work that has been adapted to film has featured children facing off against bullies. "Carrie", one of his most well known and lauded narratives for its original novel and film adaptation, is the most reliant on the subject matter of bullying. In modern America where bullying has become a subject of national outcry and countless awareness campaigns, you could say it's a perfect time for a remake of "Carrie" if there was to be one. Unfortunately with good intentions, a strong cast, and plenty of real world material to draw from, 2013's "Carrie" remake simply fails in every respect due to heavy handed directing and over reliance on the previous iterations' best bits.

This retelling sticks much to the original story's premise: Carrie (Chloë Grace Moretz) is a shy teen abused and under informed on life by her abusive mother Margaret (Julianne Moore). She has her first period without any knowledge of the situation and is ridiculed by her classmates. Her classmates are punished by their gym teacher while the lead bully Chris (Portia Doubleday) is banned from prom after posting video of the event online. Another one of her oppressors Sue (Gabriella Wilde) feels remorse and convinces her boyfriend Tommy (Ansel Elgort) to escort Carrie to the prom in her stead. All the while Carrie is slowly learning about the mysterious power she possesses, telekinesis. Things go great until a bucket of pig's blood is dumped on Carrie and Tommy after their coronation as prom king and queen. Carrie begins her rampage, wreaking havoc on those who have ridiculed her all along.

It must be reiterated how much this film had to work with: An up and coming actress in Chloë Grace Moretz that has a great track record in genre films, the height of bully awareness and case studies in American pop culture, modern effects work enabling heightened usage of Carrie's telekinetic powers, present day derided religious fundamentalist groups to draw inspiration from, and modern social media technology that could focus on cyber bullying and its startling affects in reality. Literally none of this is used to its fullest extent, especially the most accessible item Moretz herself. Moretz is forced to constantly look confused and bewildered regarding her powers throughout the movie as opposed to any wonder or awe. She makes due with the minuscule amount her character is allowed to legitimately progress, as leaps are taken to get Carrie where the story wants her to go. And her mother lacks any and all modern self awareness, it's a caricature that Moore plays so comically it incited laughter throughout my theater consistently. The rest of the cast isn't good enough to mention, or so heinously bad you want to forget. Portia Doubleday's version of Chris Hargensen is an oversexed, mustache twirling Bond villain that is so over the top that you don't even root for her demise. Her performance is so painful, forced, and contrived that it wreaks of desperation from the director and performer. Simply put there was nothing there, they had nothing to work with, so they put a Hannibal Lecter mask on the character and said run wild. There isn't a real human to be found in the cast outside possibly Ansel Elgort's Tommy Ross, who is rather charming as the school jock.

As for Carrie's powers and the inevitable climax? Utter disappointment. There is nothing creative, nothing memorable and nothing that hasn't been done before throughout Carrie's imitation of Phoenix. Things catch fire, tables overturned, large objects thrown. It's sad to be perfectly honest. The only sequence you absolutely have to crush in the remake of "Carrie" is this finale. It needs to feel fresh, authentic, and of its own voice. Instead we see much of the same, and what's different has such bad CGI animation it pulls you directly out of the film and instigates a cavalcade of laughter again.

The bullying elements are touched on in the exact same fashion as the original, and offer nothing new to keep fans engaged. Outside the posting of a video taken with a cell phone camera there is no modernism within the film regarding style or technology. Carrie spends one minute looking at a YouTube video on telekinesis and retreats to books she can take home due to her mother's nature as a Luddite. Again it's a severely missed opportunity, but it's mostly caused due to the mother still being trapped in 1976 as a character. Script revisions and character adjustments could have easily solved this hindrance to anything honest this film might have been able to say.

The final product of Carrie (2013) is disappointing to put it plainly. Again it comes at a time in our culture where a fun piece of genre fiction could have transcended its pulp nature and evolve into an adolescent breakthrough. It's clear that the people involved in this remake never had that in mind and plainly wanted to stick to the basics set by its far superior predecessor.