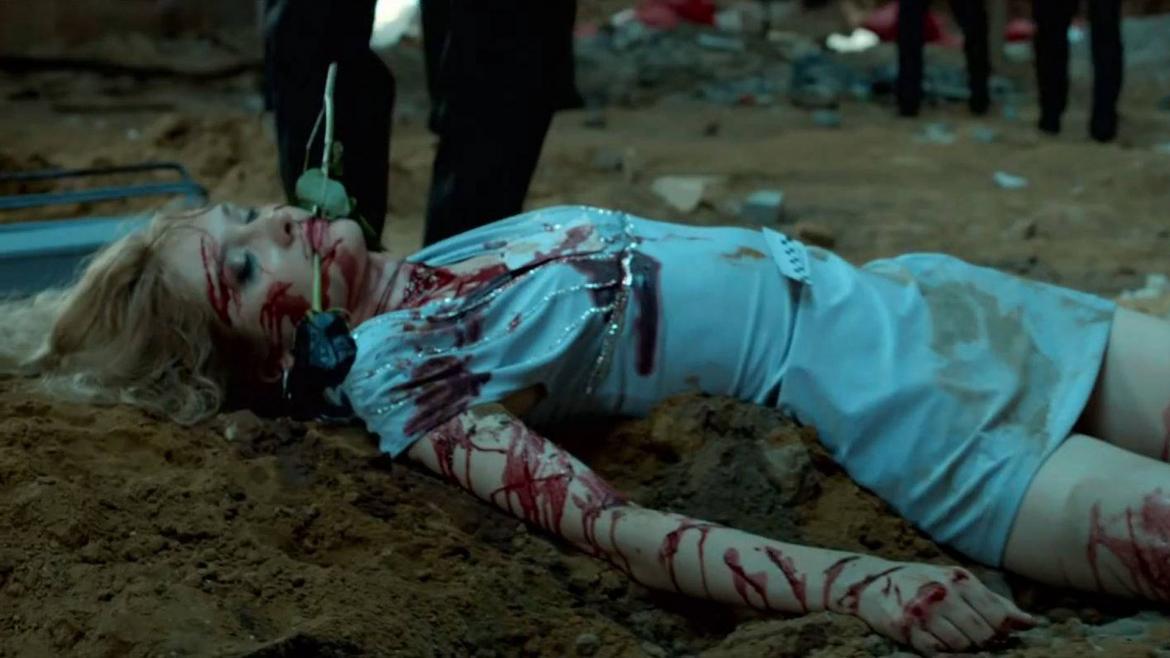 What do you do when a serial killer is loose in LA dicing up Russian immigrants? Bring in Russian Schwarzenegger, duh. Black Rose harkens back to the glory days of 90's action thrillers, but amongst all the machismo and super energetic music for no reason Alexander Nevsky's film lacks a key ingredient--quality.

Nevsky pulls double duty as director and star along side Kristanna Loken--merely coincidence that one actually played a soulless robot with no personality at one point in their career and the other just resembles a soulless robot with no personality here. Nevsky plays Vladimir, a Russian transplant in LA partnered with Emily (Loken) to track down a serial killer who leaves a signature black rose at each crime scene.

Nevsky, a bodybuilder turned actor, certainly earns the comparisons to The Governator given the obvious career trajectories. The director/actor has the physique to pull off a career as an action star, but there isn't much in the way of instinct in front of the camera. Rather than emulating even the more heightened macho performances of the late 80's early 90's Nevsky seems to have zeroed in on Schwarzenegger ala The Terminator. The actor has no charisma on screen and no energy to his delivery. Loken consistently has to carry his hulking frame from scene to scene and inject any form of life into an already stale storyline. Beyond that, the film is woefully light on action or thrills--utlizing exciting music at baffling times and lingering on shots for entirely too long. At times, the flow of scenes rival that of the master of the romantic thriller, James Nguyen.

Taking a moment to recognize the time capsule of a bygone era in filmmaking, Black Rose does carry a modest dose of nostalgia. Nevsky's brand of filmmaking--mostly in tone only--captures a unique blend of "Oh, those were the days" memories and "Yikes, we actually LIKED that" regret. Those two sentiments together fill a certain niche that's difficult to navigate in terms of worthwhile criticism. While there's a lot of technical whoopsies and lazy mannerisms on display, there's a charm to its ineptitude that some people might not understand.

It's easy to want to make excuses for mediocrity in the same way that it's easy to unfairly malign something that wasn't totally made for you--somehow Black Rose occupies a space where both of those things can be true simultaneously. Nevsky's film is for the children of the 90's with a fondness for bad action thriller cheese. Even then, those now grown men and women will look at it and recognize that Nevsky has a loooong way to go before he can out-Schwarzenegger the Schwarzenegger.