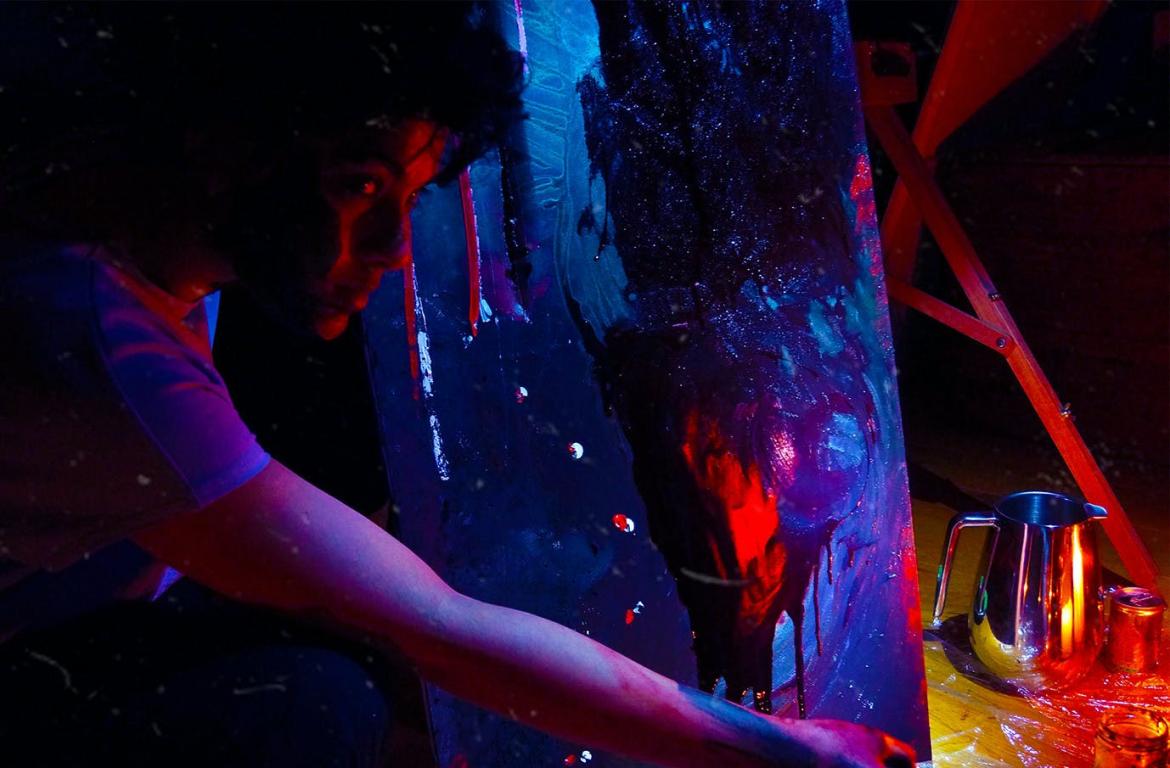 There are no shortage of films about possession and hauntings that are presented from the lens of Christianity. These movies are so common, in fact, that I would wager a fair number of genre fans can recite large chunks of the Catholic Rite of Exorcism from memory. It is considerably less often that we get movies that approach similar themes and stories from another perspective. Black Lake is one such film.

Black Lake follows a young woman named Aaraya (played by writer/director K. Pervaiz). Aaraya is a visual artist who decides to take some time away from the city and from her family by escaping to a beautiful remote cabin in the Scottish countryside. Soon after arriving, Aaraya receives a package from her Auntie Ayaneh (Aditi Bajpai) containing an ornate red scarf. Her aunt reveals that she purchased the scarf in a small village on a recent trip to Pakistan. Aaraya jokes that Ayaneh likely paid a fortune for it as a Brit, and Ayaneh chuckles, insisting that she may live in the UK but she is still Pakistani. Aaraya is absolutely transfixed by the scarf, and hangs it on a chair beside her bed. Not before long, Aaraya begins having strange dreams, waking up in a cold sweat. She thinks nothing of it at first, but as the occurrences persist she becomes afraid that the scarf may be haunted by a Churail, a South Asian witch.

Black Lake is the second feature length film by K. Pervaiz. Going by K/X1, the filmmaker wrote, directed, and produced the film. K’s first film, Maya, is a Kickstarter funded horror movie about a Jinn possession that was filmed on-location in Pakistan with performances in Urdu. Black Lake has an exceptionally small cast, with just Aarayah, her aunt, and the Churail. From the jump, it is clear K. is after a moody and experimental horror film. A majority of the shots are long and sweeping, and often don’t include any action or characters. Rather, the film focuses dreamily on the landscapes, or milk slowly spreading within a mug of coffee. A synthy and ethereal score plays over many of the film’s dialogue-free sequences.

While the film offers some daring decisions it quickly becomes apparent there just is not enough material to justify a feature length. The first problem is in the cinematography. Almost every shot is just too long. Rather than being beautiful and meditative, it ends up feeling like the camera was left running. The length of the shots, especially when stitched together into longer montages, creates a sense of frustration rather than tension or dread.

K.’s performance as Aaraya, while sincere, is not very dynamic either. This only adds to the sense that the only way through this movie is to slog. We don’t see enough of her art or herself to get a clear picture of who she is as a character. Once the Churail starts to take hold of her it’s difficult to grasp the severity of her descent and the messaging around cycles of violence becomes convoluted in the film’s third act.

I can’t help but wonder if things would have been different if the film had had more creative input during its creation. Taking on the roles of writer, director, producer, and lead actor doesn’t leave much room for criticism or growth. It is entirely possible that K. filled all of these roles due to budget restraints, but the movie ends up feeling a bit self-indulgent. Additionally, there just isn’t enough plot to keep things moving. Ultimately, it becomes clear that the scarf is haunted, and blood starts to spill, but this viewer was left feeling like this could have easily been a fifteen minute short and would have been much better served if it had been.

Screened as a part of the 2020 Salem Horror Fest