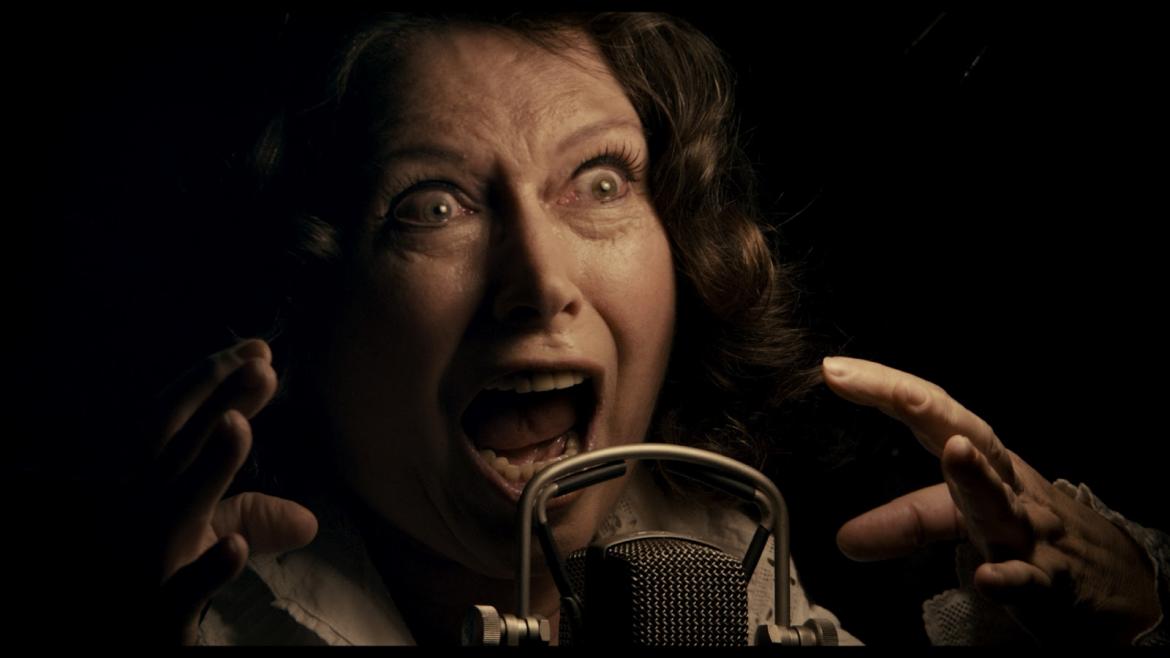 In Robert Spadoni’s book “Uncanny Bodies” the author argues that the U.S. film industry’s acceptance of sound technology was one of the key contributing factors in establishing the modern horror genre. Sound became a method by which films sought out and experimented with new ways of engaging and potentially growing their audience. Certainly no cinematic form held more potential for this then those with high spectacle, fantastic elements. But for Spadoni, the implementation of synchronized sound called more attention to the eeriness of the screen than it assisted in developing a film’s verisimilitude. Certainly films with horrific elements were present before something like Tod Browning’s Dracula but it is undeniable how completely tethered the cinematic horror genre has become to sound effects and musical accompaniment.

Peter Strickland’s Berberian Sound Studio is a film that explicitly addresses this ability for horror to simultaneously call attention to its artifice while manipulating us into shock. Written and directed by Strickland, we see both the broader processes and psychological toll of creating generic fiction and the ability of such films to complicate our relationship to the cinema.

Gilderoy (Toby Jones) is a bookish and timid sound mixer from Britain. He arrives in the sallow halls of an Italian film studio to assist in the final sound mixing for what sounds like one of the most delightfully appalling giallo’s ever made, “The Equestrian Vortex.” All we are allowed to view of the film are the reflections cast from the projection and the rather brilliant credit sequence. Gilderoy, whose previous experience is with nature documentaries of the David Attenborough variety, is entirely unsure why he has been hired for the project. As the post-production process continues the boisterous bacchanalia that unfolds further distances Gilderoy from his work as well as his current employers, producer Francesco (Cosimo Fusco) and the philandering director Santini (Antonio Mancino). Though he finds some mild companionship with actress Silvia (Fatma Mohamed) he is listless and homesick, yearning for a home we only see in letters from his mother. As rolling black-outs halt production Gilderoy struggles with his desire to persevere or escape.

While the film within Berberian Sound Studio is a conglomeration of Franco, Fulci, and Argento, we find little of these directors’ explicit influences. The film more directly recalls Bergman’s “Personae” or even Roeg’s “Don’t Look Know.” Much like “Personae” the film lacks any real antagonist bur rather finds its greatest challenge in Gilderoy’s interior struggle. Through a languid pace, dry wit and tongue-in-cheek style Strickland adeptly balances hilarious absurdity with the uncanny freakiness of simply watching an individual repetitiously produce a sound that is meant to be something…well, something different than shattering melons and diced cabbage. Jones’s performance subtly conveys the shades of Gilderoy’s immaturity, timidity, and technical prowess in a way that buttresses the film from falling into overly pretentious territory. Rather than immediately descending into obscure profundity Strickland slowly builds his atmosphere before making grander leaps.

Despite the film’s accomplished stylistic attributes its narrative components feel as though they are carried over from the late 1990s and early 00’s. There is a definite flavor of the period which saw a surge of films dealing with a protagonist’s inability to discern reality and fiction informing the audience’s perspective. It isn’t surprising the film is based on a short Strickland produced in 2005. The character relationships are at times serviceable at best. Most supporting characters solely exist to undermine, embarrass, or harass Gilderoy. Silvia, one of the few sympathetic characters, is framed as his foil, her sexual harassment echoing the financial extortion he faces. У нас можно получить справку в бассейн недорого и без прохождения врачей. But this dichotomy relies on a gendered interpretation of subservience that is further accentuated through Gilderoy’s constant emasculation at the hands of his machismo soaked co-workers. Gilderoy’s connection to his mother and vacant sexuality also precludes some rather dated character attributes that, in most genre pictures, position this shy, timid, slightly Oedipal man as a figure increasingly likely to exhibit some form of psychosis. And while the film doesn’t pretend to make Gilderoy the next Norman Bates or Jason Vorhees it nevertheless seems content at replaying some rather tired tropes.

But such qualities are of lesser concern to Strickland. As he has mentioned, Berberian Sound Studio is a film that muses on the ability of horror, exploitation, exploration, and the avant-garde to thrive from one another. Though not an original idea Berberian does capture something unique about the recent fetishization of analog and other presumably vestigial technologies. (The reemergence of VHS as a recording and production format is but one such example). For a majority of the film we watch Gilderoy record and re-record moments of foley and vocal work. This in turn begins to replay in slightly different ways later in the film; the quality, precision, and narrative accuracy becoming sequentially less accurate. As Gilderoy’s mental state begins to come into question the frequency of these repetitions and the level at which they diverge from their original material continues to intensify. Through this repetition of montages and specific images Strickland is detailing the intricate process by which a horror audience’s memory and nostalgia become a part of the film. Berberian Sound Studio then becomes about our own desire to return to an idealized pro-filmic event and continually relieve the connection between image, sound, filmmaker, and audience, at the moment of shock.

Despite the narrative and character missteps in Berberian Sound Studio I found much to appreciate in Strickland’s stylistic ability as well as Jones’s performance. The conclusion in particular leaves us with a pile of questions that are more than satisfying regardless of their ambiguity. Indeed, Strickland has crafted one of the more accomplished examples of self-reflexive genre cinema in the passed few years.