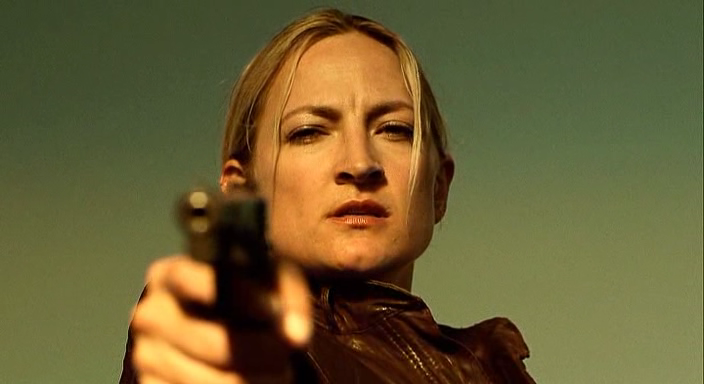 Zoe Bell burst onto the acting scene in 2007 with a leading role in Quentin Tarantino's "Death Proof". She won more than a few hearts with the role and her rough play on the hood of a sports car, but it wasn't her first experience in front of the camera. By the time "Grindhouse" hit theaters, Bell had already established herself as a top notch stunt woman, doubling for such stars as Lucy Lawless in "Xena" as well as for Uma Thurman in "Kill Bill". Since her big break she has been quickly adding credits to her resume as an actress and doing fairly well in the process. This year, director Paul Ehteridge decided to give her a shot at her own leading role in "Angel of Death", and while she looked fantastic and her fight scenes were stellar, the movie as a whole unfortunately weighs in as a decent idea but a whole lot of mediocrity.

Eve is a hired assassin and she is damn good at what she does. Quiet, efficient and cold, she has made a name for herself as the go-to-gal in organized crime hits. That is until her current mission is thrown amiss when her target's daughter decides to skip gymnastic practice. With extra muscle on the scene and having to perform a kill that she is not prepared to handle, she finds herself with a large knife stabbed through her brain and the blood of an innocent child upon her hands. While the doctor is able to remove the blade from Eve's brain, he's not able to repair the trauma that comes from the brain injury and it doesn't take long for Eve to discover that she doesn't like her job and somebody needs to pay for the death of the young girl.

"Angel of Death" is easy to get excited over; it packs a great genre cast with the likes of Ted Raimi, Lucy Lawless, Doug Jones, and Bell herself. Let's face it; Zoe Bell has already proved her self as an ass kicking action star, so her heading up an action crime thriller makes sense. It just fits. For Bell, she served her duties well enough as did her co-stars, but the movie falls short with over ambitious writing. It's definitely a case of too much style over not enough substance.

This movie tries very hard to rely on many twists and turns to keep you guessing. As Eve traces the paper trail to find out who ordered the hit that led to the death of an innocent girl, the movie quickly becomes muddled and confusing. Instead of being a well crafted roller coaster ride of hidden identities and underlying double crosses, the plot instead manages to only become a loose thread that ties together fight scenes. Sure, fight scenes are great and they are choreographed well in "Angel of Death", it just becomes a jumbled mess to try and keep track of.

A plot of this type could work, but as I said they concentrate on the style too much. While Bell is outstanding for beating bad guys to a pulp and looking fabulous while doing it, she lacks the drive to handle such an intricate plot. Bell is believable, but she fell short when it came to pushing the intensity and drama up a notch to make you bite into the red herrings they were giving you. Her co-stars did not do much to help in this manner either, doing well enough to make the movie watchable but failing to make the film riveting. Sadly, the big names that are involved are criminally underused outside of Doug Jones. Lucy Lawless is there to flounce about a bit in a her underwear and little else. When Ted Raimi makes his appearance, he is gone in a matter of seconds. Both of these actors could have helped to shape this story a bit better and ramp up the excitement a touch.

One highlight here is getting to see Doug Jones act without a stitch of latex on his person. Normally the man is buried under pounds of latex makeup and rubber suits, here he is simply himself. It is a nice touch as he does a good job in his role as a mob doctor and manages to make himself one of the few characters that you actually grow attached to in the movie. He's not weird, he's not zany, he's just Doctor Doug Jones.

"Angel of Death" had the potential to be a knock out crime thriller but fell short. They used the fighting abilities of their leading lady Zoe Bell quite well but forget to put in the same amount of effort for the drama and story portions. All style, no filler, this movie manages to be a whole lot of mediocrity in a shiny package.

Quite simply, "Angel of Death" is a thriller with very little thrill.