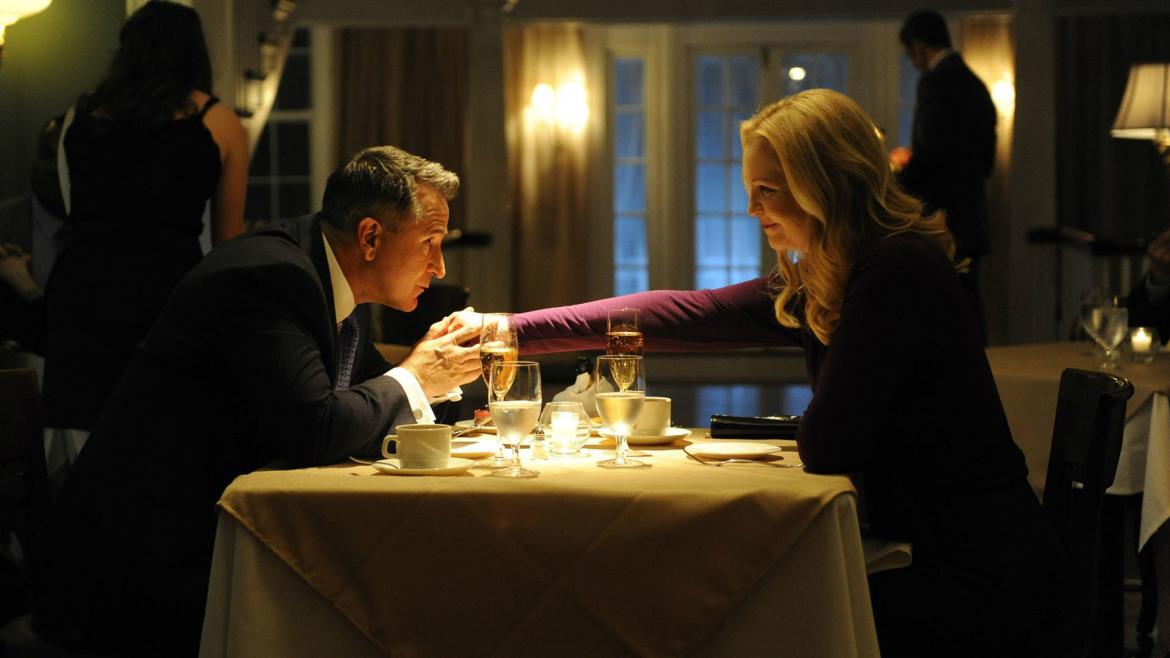 A Stephen King novella takes on the properties of a Lifetime joint in A Good Marriage. A woman is married to a potentially dangerous man and needs to find a way out of the situation. Sure lots of movies could fight for room under that umbrella, but there's a little bit more at play. Taking inspiration from the BTK killer, King takes a swipe at adapting his own story and as engaging as the premise sometimes is there are really only fleeting moments of suspense and a handful of inspired acting bits to hook the viewer.

Bob (Anthony LaPaglia) and Darcy (Joan Allen) are celebrating 25 years of marriage. Shortly thereafter Bob leave for a business trip and while in search of some batteries for a remote Darcy stumbles upon some evidence there her husband might be linked to a series of murders by a serial killer dubbed Beadie. Thrust into a downward spiral Darcy fights for her sanity in wondering how she could be so blind to her husband's secret and how she will survive the Beadie's wrath.

The premise asks the audience to accept quite a bit pretty early on- like how after over two decades of marriage all it takes is a faulty remote to discover such a groundbreaking secret. Not to mention how poorly hidden Bob kept his dirty shenanigans- it could just as easily been in a box marked "Murder Evidence," played as a joke, and it would have been slightly less troublesome. However, lowering this to the standards of a Lifetime movie might only be slightly harsh as A Good Marriage might be a little too well-made to be featured with that particular line of programming. Still, the film resembles a made for TV slog that could have fit comfortably in some sort of anthology instead of a full length feature.

There are really only two redeeming aspects of A Good Marriage- LaPaglia and certain stretches of King’s script. LaPaglia has a way about him that makes him a formidable foe for a movie like this, but not nearly enough is done with his character. The duality of the character is great though- chillingly switching from cold hearted killer to loving husband at the drop of a hat. Given the fact that Darcy finds out Bob’s secret early on and that Bob knows that Darcy knows makes for a pretty engaging psychological back and forth. It takes almost no time at all for the progression to come to a dead halt and just like that, the suspense is sucked out of the film entirely. A new character comes in so late in the game the the actor and their performance feels utterly wasted, just adding to the hackneyed nature of the film's last half. Иной раз дамы занимаются маустурбацией. Но не по причине отстутсвия партнера. Зрелая мастурбирует https://милфы.org/masturbaciya и просто так. Для того, чтобы попробовать что-то новое в интимной жизни и испытать другие сексуальные ощущения.

In the end A Good Marriage wastes every ounce of potential and talent behind its inception. The film puts its strongest foot forward in LaPaglia and Allen's verbal sparring combined with King's writing before that foot is eventually kicked out from under itself and then it's a slow limp to the bitter end. The end result is woefully thin, culminating in one of the softest and more disappointing endings for a thriller in years. A Good Marriage proves to be one of the most inadequate King adaptations yet.

Color Out of Space

Underworld: Rise of the Lycans